The Hymn of Saint Colman in Praise of Archangel Michael 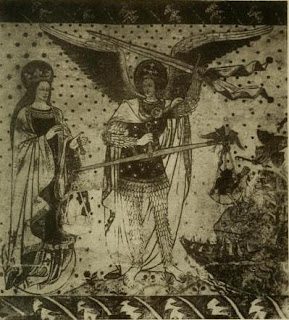 September 29 is the feast of Saint Michael the Archangel, a saint with a long history of devotion in Ireland. Below is a hymn in praise of the Archangel from the Irish Liber Hymnorum, where it is attributed to Colman, son of Murchu. Archbishop John Healy tells us something of the author and supplies a translation of the text:

In A.D. 730 flourished Colman, son of Murchu, Abbot of Moville, who is regarded as the author of a Latin hymn of singular beauty preserved in the famous work known as the Liber Hymnorum now in Trinity College, Dublin. "Colman, son of Murchu," is described as the author of the hymn, and hence Dr. Todd very justly regards him as identical with the Abbot of Moville. The following is an English translation made for the learned Father O'Laverty, author of the History of the Diocese of Down and Connor, by the late lamented Denis Florence McCarthy, a poet whose own pure heart could well interpret the soaring aspirations of a saintly soul: —

THE HYMN OF ST. COLMAN, SON OF MURCHU, IN PRAISE OF ST. MICHAEL THE ARCHANGEL.

"No wild bird rising from the wave, no omen from the land or sea,
Oh Blessed Trinity, shall shake my fixed trust in thee.
No name to God, or demon given, no synonym of sin or shame,
Shall make me cease to supplicate the Archangel Michael's name,
That be, by God the leader led, may meet my soul that awful day
When from this body and this life it trembling takes its way.
Lest the demoniac power of him, who is at once the foot of pride
And prince of darkness, force it then from the true path aside.
May Michael the Archangel turn that hour which else were dark and sad
To one, when angels will rejoice and all the just be glad.
Him I beseech that he avert from me the fiend's malignant face,
And lead me to the realm of rest in God's own dwelling place.
May holy Michael day and night, be knowing well my need, be nigh,
To place me in the fellowship of the good saints on high
May holy Michael, an approved assistant when all else may fail,
Plead for me, sinner that I am, in thought and act so frail,
May holy Michael in his strength my parting soul from harm defend,
Till circled by the myriad saints in heaven its flight doth end;
For me may holy Gabriel pray — for me may holy Raphael plead —
For me may all the angelic choirs for ever intercede.
May the great King's eternal halls receive me freed from stain and sin,
That I the joys of Paradise may share with Christ therein.
Glory for aye be given to God — for aye to Father and to Son—
For aye unto the Holy Ghost with them in council one.

V. "May the most holy St. Michael
The prince of angels defend us,
Whom to conduct our souls heavenward
God from the highest doth send us.''