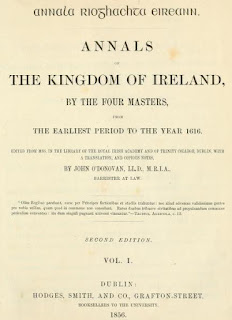 December 2 is the feast of a holy man bearing the ancient name of Nuadha who is associated with the monastery of Clones, County Monaghan. The most famous of the saints of Clones is the founder Saint Tighernach, presumably, Nuadha was one of his successors. The passing of Nuadha is recorded in the Irish Annals at the middle of the eighth century and his feast day noted in some of the Irish calendars. The Annals of Ulster record the year 750 as the date of Nuadha's death, the Annals of the Four Masters give the year 746. The seventeenth-century Martyrology of Donegal records this entry at December 2 :

The age of Christ when he went to heaven was 750.


The twelfth-century Martyrology of Gorman notes in its appendices:

The name of Saint Nuadha does not appear in the earlier Martyrology of Oengus.