How to Learn Irish 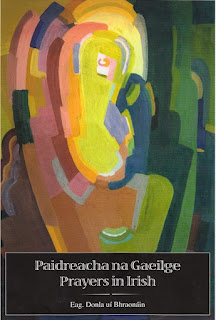 To mark the annual Seachtain na Gaeilge celebration of our national language and culture below is a rather extraordinary article on the subject of how to learn Irish. Published in early 1858 in the Boston Catholic newspaper, the Pilot, author C. M. O'Keefe begins by making a reasonable proposition that a good way to learn the Irish language is through the use of a prayer book. He then goes on to remind us of all our saints and martyrs whose native tongue was Irish and claims that 'we have colonized Heaven'. An even more extraordinary claim is that the angels who visited the seventeenth-century English astrologer William Lilly spoke with an Irish accent! This, we are assured, is perfectly reasonable given that 'the Irish are so numerous in Heaven that the inhabitants have contracted our accent.' Here on earth there have been some good collections of Irish prayers published in recent years, including the 2008 volume edited by Donla uí Bhraonáin, Paidreacha na Gaelige, which includes a wonderful selection of Paidreacha chuig Naoimh na hÉireann, Prayers to the Saints of Ireland:

How to Learn Irish.

In 1847, Smith O’Brien was learning Irish from a primer. Adverse fortune tore the primer out of his hand, and plunged him into a felon’s cell. With his eyes, naturally, full of tears, cheeks pale, and heart throbbing—distracted by contending emotions —he could not apply his agonizing mind to the “Sgeul beag," which Finachty has written for Irish learners, —No! But in this very frame of mind he could, and would apply himself attentively to a prayer book. This is the use of learning to read a prayer book. You read it when nothing else can be read. We are all like children who fly, appalled, to the bosom of their parent from the scowling darkness and hoarse storms of gathering adversity. And seldom is the journey of life undusked and unchequered by such storms. I have known several instances—hundreds I might say—in which men —like Lucien Bounaparte, toyed a while with the Irish language, and then flung it by, never more to open the book in which they had been reading; because such a book was of no use whatever, except as a “Reading made easy.” If the time which is frittered away upon unprofitable books were given to a prayer book, the knowledge acquired during three months would be never lost, it would be used, and used again, used ten thousand times, during, perhaps, sixty years. And the older you grow the more you will use your prayer book. Not so with other books; calamity does not compel you to open novels; the iron scourge of adversity does not force you to read them with tears. Of all books a prayer book is most easily read, because you can get a teacher everywhere. Every hag in Erin knows the Lord’s prayer, creed, &etc. With your eye on your prayer book, and your ear on her utterances, you must be very stupid indeed if you do not learn some words. These words will never be lost; you will repeat them, I trust, every day of your life, and several times every Sunday. In the halls of heaven Irish is not an unknown tongue. There is many a saint in glory that spoke no other. If we address in their own tongue Holy Brigid, Holy Columbkille, our prayers may perhaps be acceptable. The Saints may turn from the heights of their glory and look down upon us, poor banished sons of Eve, mourning and weeping in this vale of tears. — There is many a martyr there to whom the Gaelic was familiar. There is Patrick himself, and whole armies of his shining disciples. We Irish have a strong faction in America—a strong party in Scotland—a strong faction in Australia— a strong faction in England, but we are stronger in Heaven than any where on earth. This may appear ludicrous, but it is literally the fact. We have colonized Heaven. Lilly asserted that the angels who visited him, spoke with a strong Irish accent. This you will see in “D’Israeli's Curiosities of Literature.” Now, why should he say they spoke with an Irish rather than a Spanish or German accent ? We can easily account for it. The Irish are so numerous in Heaven that the inhabitants have contracted our accent. Seriously: no language is so expressive of piety and adoration as the language of the Gaels.— If we should speak in German to horses, in English to birds, in Italian to the ladies—we should speak in Irish to the glorified saints. Therefore every Irishman should learn to read an Irish prayer book, and in addition to this it should be the first book he should learn to read, because you can always meet with people who can teach you Irish prayers.—

There is a second way of learning Irish and that is singing it. “Sorrow,” says the Spanish proverb, “flies appalled from the voice of song.” If prayer be our refuge in adversity, song is our enjoyment in serener moments.— When the flowers of pleasure spring up under our footsteps, and the joyous sunshine glows radiantly over our heads, we cease to pray, and inevitably sing—the carol of gladness bursts from the lips of success. Our lyric literature is the most voluminous in the world. No nation in the world can or could ever compare with us as song-writers. Nothing can be more mean, poor, tame and contemptible than the songs of Scotland, when compared with those of Ireland. The scholar who learns to read and sing ten or twenty of these songs will certainly have a large stock of words in his memory. This is the way in which the ancient philosophers of Ireland learned first, and taught afterwards, not merely philology, but all physical science. Magnum ibi numerum versuum ediscere dicuntur, says Caesar. By ediscere he means to learn thoroughly; to study accurately, or to commit to memory. This idea, common in schools, is not new. It is two thousand years old, if not more, as we learn from Caesar. The ancient sages of the Gael did not, like some modern philosophers in America, first publish songs, and then ridicule and scoff at all singing. This blunder was reserved for modern times. The Exiles, I trust, will not be deterred by the clumsy raillery of a stupid clerk, from clubs in every city, and singing in chorus Irish words to the immortal airs of Ireland. Irish songs and Irish airs shall, I trust, be sung, simultaneously, on the banks of the Ohio, the Hudson, and the Mississippi.

"The stranger shall hear their lament o’er his plains.”