The Founding of Achonry 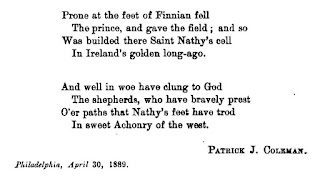 Today is the feast of Saint Nathy, patron of the Diocese of Achonry. Below is an 1889 poem by an Irish-American contributor to the Catholic press of his day, Patrick J. Coleman, which recounts the founding of the diocese and the part played by Saint Finnian of Clonard in its establishment. Saint Finnian is depicted in hagiography as a teacher and guide to other Irish monastic saints and his Life includes the episode on which the poem is based. The idea of a monastery's location being decided by divine intervention is a common trope in hagiography and here it provides the context for the relationship between the senior saint, Finnian, and the junior, Nathy. Modern scholars suggest that such stories really reflect the church politics of the time when the saint's Life was written. Nathy himself is not the subject of a written Life but his small foundation was sufficiently important to merit the recording of its establishment in the Life of Saint Finnian:

THE FOUNDING OF ACHONRY *

THUS saith the legend of the bard:
To do the holy will of God,
To Leyney's land from old Clonard
Afoot the saintly Finnian trod.
Then laid on Nathy in his cell,
Below the hill, anointed hands;
And gave him crozier, book, and bell.
As bishop-prince of Leyney's lands.
With knitted brows of doubt he frowned
Where he should set the comer stone
Of Nathy's church,— on level ground,
Or on the purple mountain cone ?
So Finnian slept, revolving deep,
And while he slept, an angel face
Of glory whispered in his sleep,
“Lo, Nathy will appoint the place”
Because of comfort of the words,
Soul-glad went Finnian o'er the land,
About the singing of the birds
Of dawn, with Nathy hand in hand.
And while they went, behold, a field
Through which a silver stream did run,
Shone like a warrior's golden shield
In battle opposite the sun.
The lark sang shrilly o'er the trees,
The finch and linnet in the bowers;
There was a drowsy drone of bees,
Gold-girdled in among the flowers.
And since his heart was pure, and he
Loved all things for their native worth,
“Lo," Nathy said, “God giveth me
Unto mine own this plot of earth.
“Here will I build my church, and make
Mine altar and my lowly cell.
Where morning music of the brake
Will mingle with my matin bell."
And even as he spoke there came,
Knee-deep in flowers across the ground,
The master of the field, aflame
With anger, at his side a hound;
And laid rude hands upon the twain.
On Finnian and on Nathy mild,
Who stood with eyes upon the plain
And simple-hearted as a child.
Then sudden wrought a mighty sign
Unto the master of the plot,
That so by miracle divine
For God he might possess the spot.
A spear's cast from the place there lay
A rock, in stature like a man,
A swarthy crag of mossy gray.
And many cubits in the span.
Nor thinking any thought of ire.
Nor saying aught of mild reproof,
In heart with holy zeal afire,
Went Nathy from the man aloof.
Then raising psalms of prayer, while sweet,
Dim glory shone about his face.
He blessed the rock, which, at his feet.
Broke sundered to its flowery base.
Prone at the feet of Finnian fell
The prince, and gave the field; and so
Was builded there Saint Nathy's cell
In Ireland's golden long-ago.
And well in woe have clung to God
The shepherds, who have bravely prest
O'er paths that Nathy's feet have trod
In sweet Achonry of the west.

* The diocese of Achonry, which takes its name from a small village in County Sligo, includes portions of Sligo, Mayo, and Roscommon. St. Nathy (whose feast is the 9th of August) was the first bishop of the diocese, about the year of our Lord 630. The legendary circumstances of his consecration by St. Finnian of Clonard, whose disciple he was, are narrated in these verses. His present successor is the Most Rev. John Lyster, D.D. The name of Leyney still survives in the barony Leyney, in Sligo, originally the patrimony of the Clan O'Hara.