'A Vessel of Wisdom and a Man Full of the Grace of God': Saint Adamnan of Iona 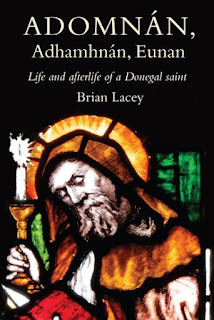 September 23 is the feast of Saint Adamnan, a seventh-century Donegal saint who was the ninth abbot of Iona and one of the most prominent churchmen of his time. I recently treated myself to a copy of a new book on the saint by Brian Lacey, Adomnán, Adhamhnán, Eunan: Life and afterlife of a Donegal Saint, published by Four Courts Press in May of this year and look forward to reading a modern scholar's reappraisal of this fascinating man. Although he is generally best known as the hagiographer of and successor to Saint Colum Cille of Iona, there remains a more local aspect to the cult of Saint Adamnan who is the co-patron of the Donegal diocese of Raphoe, a connection which has a chapter of its own in Lacey's book. In the seventeenth century Micheal O'Clery compiled The Martyrology of Donegal, whose entry for this day contains a summary of what had been handed down about local hero, Adamnan. It presents him as an abbot, ascetic, and mystic who is sustained by a vision of the Christ child for three days and who is further associated with an apocalyptic vision of heaven and hell. It concludes with a reference to the List of Irish Parallel Saints in which our native holy men are viewed as local equivalents of major Christian figures, with Saint Adamnan likened to Pope Sylvester:


ADAMNAN, son of Ronan, of the race of Conall Gulban, son of Niall, as to his stock. His mother was of the race of Enna, son of Niall. Ronat was her name. This is the Adamnan who was six and twenty years in the abbacy of I-Coluim-Cille. On a certain day that he was at Hi, he meditated in his mind to remain for three days and three nights in his church alone praying to the Lord, and he remained to the end of that time without coming to the monastery at all. They sent some mature men to the church to know how the cleric was, for they thought he was too long absent from them. They looked through the key-hole, and they saw a little boy with brilliance and bright radiance in the bosom of Adamnan. And Adamnan was thanking and caressing the infant; and they were not able to look at him any longer by reason of the divine rays which were around the boy. They were certain that it was Jesus who was in the shape of an infant, delighting Adamnan in this manner, and also that he was his satisfaction and gratification during these three days and nights.  He was a vessel of wisdom, and a man full of the grace of God, and of the knowledge of the holy Scriptures, and of every other wisdom; a burning lamp which illuminated and enlightened the west of Europe with the light of virtues and good morals, laws, and rules, wisdom and knowledge, humility and self-abasement. These are his churches, namely, Rathbhoth, Druim-Thuama, in Cinel-Conaill; The Scrin, in Tir Fhiachrach Muaidhe and other churches besides. Seventy-seven years was his age when he sent his spirit to heaven, His body was interred with great honour and respect at Hi, and his body was removed to Erin after some time.

It was to Adamnan were revealed the glory of the kingdom of heaven and the pains of hell, as contained in the Vision of Adamnan,which was copied from the Leabhar-na-hUidhre.  And thenceforward it was the glory of heaven and the pains of hell he used to preach. The Life of Ciaran, of Cluain, states, chap. 47, that the order of Adamnan was one of the eight orders that were in Erin.

A very ancient old-vellum-book, of which we have spoken at 1st of February, at Brighit, and at 17th March, at Patrick, and at 9th of June, at Colum Cille, &c., states, that Adamnan was, in his habits and life, like unto Silvester the Pope.

The Martyrology entry doesn't tell us anything new or even anything very interesting about Adomnán, made up as it is of extracts from earlier texts and stock hagiographical phrases. But it does tell us how the great seventh-century Donegal intellectual and scholar, Adomnán,was perceived by one of the greatest intellectual and scholarly Irishmen, also from Donegal, about a thousand years later.