An Irishman and Scholar 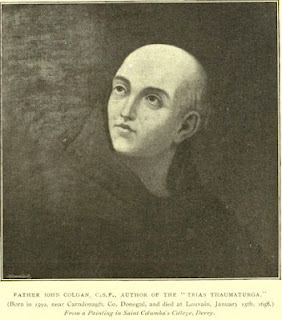 Below is an article which was first published in 2009 at my previous site and which I originally sourced here. In it Father Pat Conlon, OFM, pays tribute to another Irish Franciscan, the great seventeenth-century hagiologist, Father John Colgan. The article provides a very useful introduction to the work of Father Colgan and the other Irish priests whose work preserved so many of the lives and traditions of the Irish saints:

It was just after Easter 1652. Fr John Colgan took a deep breath before opening the letter. He recognised the seal on the back as that of Fr Pedro Manero, Franciscan Minister General. The Irish friar took a moment to scan the Latin text. Then he smiled as he realised that it was one more load lifted from his back. It had started two years back when the Irish Provincial and his Definitory had appointed Fr John as Commissary of the Irish Franciscan colleges in Leuven, Prague and Wielun. He was 58 years old and in poor health. Also his Guardian in Leuven, Fr Bonaventure Meehan, was opposed to the appointment. Fr John had written saying that there was no way that he could travel from Flanders to Poland and the far end of the Empire. At last the Minister General had acknowledged reality and withdrew the appointment. Fr John returned to his desk, covered with neatly written sheets of paper. He was resolved to continue his research on the Saints of Ireland. Nearly twenty years before, on 8th November 1635, Fr Hugh Ward had died in the college. Fr John had just returned from his years as a lecturer in several Franciscan colleges of the German Province of Cologne.

Another Fr Hugh, Hugh MacCaughwell, had received John into the Franciscans at Leuven on 26th April 1620. It has taken him twenty-two years to find his way into following Saint Francis. Born at Pierstown near Carndonagh in the heart of Inishowen, he had grown up during a time of war. The area had not been disturbed when O’Donnell and O’Neill rose against the English. He could recall the anxiety among the locals when the English garrisoned Derry in 1600. That same garrison had played their part in the devastation of Inishowen in 1608 when Sir Caher O’Doherty had rebelled against English rule. John was then in his teens. The events had turned his mind towards study on the continent. He had studied for the priesthood, been ordained in 1618 and qualified as a lecturer before finally deciding to become a Franciscan. He had lectured at Saint Anthony’s College, Leuven, before continuing his career in the colleges in the Rhineland.

Fr Hugh MacCaughwell had introduced Fr John to the great Franciscan theologian, John Duns Scotus, and persuaded him to base his lectures on the teachings of Scotus. Fr Hugh had been called to Rome in 1623 and died there only three months after his consecration as Archbishop of Armagh in 1626. Fr John had kept in contact with Leuven and knew that Fr Hugh Ward had taken over. He and John were from Donegal, born only a year apart and found their way to Saint Anthony’s College after ordination elsewhere. Both shared the vision, developing in the College, of showing the intellectuals that Ireland deserved its place among the cultures and traditions of Europe. One way of doing this was by putting together a proper history of Ireland, both civil and ecclesiastical. A group of Jesuits were working in Antwerp on the lives of saints. Led by Jean Bolland, they had a system of editing older lives and publishing them in Latin according to the chronology found in the liturgical calendar of the Church.

Scholarship in a Time of War

Fr Hugh Ward gathered a team in Leuven and encouraged friars to check libraries for texts during their travels. He sent Br Mícheál Ó Cléirigh back to Ireland in search of manuscripts. Slowly the material accumulated at Saint Anthony’s. Ward was busy as Guardian of the college in 1626-29 and as a lecturer. He suffered from ill health from 1630 and made a special effort to give a eulogy on the great friend of the friars, Isabella, Princess of the Belgians, on 1st December 1633. Fr John’s return from Germany filled the slot made vacant by the sick lecturer. The Dutch took the opportunity of the death of Isabella to strike for complete independence from Spain. Both Dutch and French armies invaded Flanders, captured Tienen and laid siege to Leuven on 24th June 1635. The Irish Regiment of Preston was one of the four defending the town and were mainly responsible for the successful defence of the town. The friars were chaplains to the regiment and shared in the honours given to their countrymen. The main Spanish army raised the siege on 3rd July. The stress of the siege did nothing for the health of Fr Hugh Ward and he died on 8th November 1635. The Guardian, Fr Louis Dillon, invited Fr John to take charge of the project to publish the lives of the Irish saints.

Fr John was in regular contact with Jean Bolland in Antwerp and adopted the same plan — publish Latin editions of lives of the saints as found in old manuscripts in the order of the liturgical calendar. He got a worthy assistant, Fr Brendan O’Connor, who went in 1638 to research libraries in France, Italy, England and Ireland. Br Mícheál Ó Cléirigh had returned from Ireland in 1637 with more manuscripts and the text of his proposed history of Ireland or the Annals of the Kingdom of Ireland. Fr John continued his work on the Irish saints. At the same time he sought funding for fresh publications by the team at Saint Anthony’s. Br Mícheál died in 1643 and was buried in the cloister of the college. Fr John mediated on his achievements and in 1645 came up with the title of the Annals of the Four Masters for Br Mícheál’s major work.

The manuscripts were piling up in Leuven but funds for publication were drying up. War in Europe, civil war in England and the insurrection in Ireland made benefactors think twice about spending. Fr John put his name to a solemn appeal by the Guardian, Vicar and lecturers for funds to print the lives of the Irish saints “to the great good and glory of our Church and Catholic countrymen." Hugh O’Reilly, Archbishop of Armagh, wrote from Kilkenny in December 1642 authorising the friars to use part of the funds belonging to Armagh and lodged in Saint Anthony’s in Leuven to publish some of the books prepared by Fr John. Work pushed ahead and the first volume containing the lives of the Irish saints for January, February and March (Acta Sanctorum Hiberniae) was published in Leuven in 1645. The Bollandists had published the first volume of their Acta Sanctorum covering the month of January in 1643. The Franciscan Archbishop of Dublin, Thomas Fleming, provided the means to publish the next volume, Triadis thaumaturgae (the three miracle workers, Patrick, Brigid and Columba), in Leuven 1647. The third volume containing the lives of the Irish saints for April, May and June was ready for the printer in 1649. The war situation was now critical and the work remained unpublished. Even the Bollandists were having financial problems. The second volume of their Acta Sanctorum with the lives for February did not appear until 1658.

The arrival of Cromwell in Ireland and the resulting persecution brought a flood of friars seeking refuge in Leuven. Even the grants to keep the college going were insufficient for the larger community. Despite his health and the lack of funds Fr John struggled on. He returned to his original interest in Scotus. A stupid English Franciscan, Angelus Mason, had claimed that Scotus was English. Our Irish friar published a small volume on the fatherland, life, theology and value of Scotus (Tractatus de Joannis Scoti Doctoris Subtilis …) in Antwerp in 1655. It made it clear that the Subtle Doctor, to give him his medieval title, was Irish. We now know that he was born in Scotland.

Fr John died in Saint Anthony’s College on 15th January 1658, just three hundred and fifty years ago. Fr Thomas Sheerin took responsibility for publications in the college. The late Fr John’s cabinets were loaded with material ready for the printer. In addition to his work on the Irish saints and that of the Four Masters on Irish history, Fr John had begun to write on the Irish in other parts of Europe. One volume covered the general mission of the Irish outside of Ireland with a list of saints (852 pages of manuscript). The next dealt with England, Brittany, the rest of France and Belgium (1088 pages). Another covered Lotharingia, Burgundy, Germany on both banks of the Rhine and Italy (920 pages). But time had moved on. Despite the best efforts of Fr Thomas, the tremendous work of Fr John Colgan remained unpublished until the Irish resurgence of the twentieth century.