Below is an article on the Tully Lough Cross, an 8th- or 9th-century Irish treasure recovered from a lake in County Roscommon. I first posted this at my former blog in 2010 and the original link no longer works.

Rescued from its watery resting place, the Tully Lough Cross was recently put on display alongside other key exhibits in the National Museum; Eamonn P Kelly discusses the stylistic and historic significance of this find.

The Tully Lough Cross is an Irish altar cross of the 8th or 9th century (Fig 1). Constructed of metal sheets on a wooden core, it is a rare example of a metal-encased cross of the period and the only relatively intact Irish example, although what may be components for similar Irish crosses of the period have been found elsewhere in Ireland, England and in Viking graves in Western Norway. It is similar in form to the later Cross of Cong, which dates to the 12th century and which also has Co. Roscommon connections through its maker Mael Isu UaEchan, Abbott of Clooncraft. The only contemporary intact cross of comparable form is the 8th-century Anglo-Saxon example preserved at Bischofshofen in Austria, while the fragmentary remains of a bossed metal and wood cross of the 8th century from Dumfriesshire, Scotland, is in the National Museum of Scotland. 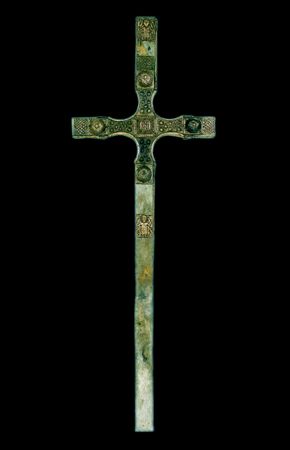 Tully Lough Cross the cross arms are cusped and decorated with bosses and panels, some of them openwork; the ornament is characteristic of Insular art of the late 8th-early 9th centuries (All photos courtesy of the National Museum)

In July 1986 a diver found the Tully Lough Cross in controversial circumstances on the bed of Tully Lough, Co. Roscommon, close to the edge of a small crannóg (an artificial island dwelling). One of the finders was subsequently prosecuted for failing to report the find and the court heard evidence of an attempt to sell the cross to the Getty Museum California, for $1.75 million. When the cross came into the possession of the National Museum of Ireland in 1990 it was in a fragmented state and examination showed that components were missing. Impact damage had also been sustained, probably before the cross came to be deposited in the lake. Underwater investigation of the find place, conducted in 1998, indicated that the cross was in a damaged condition when it came to rest on the lakebed, although it has also been established that the finders lost a few undecorated components subsequent to discovery. 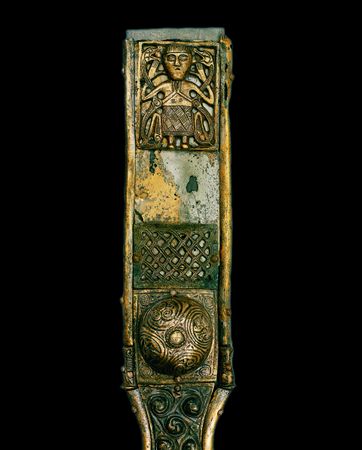 Upper shaft of the Tully Lough Cross showing details of the decoration, including a human figure between two animals, an openwork interlace panel and a bosse with spiral decoration

The cross has been conserved and restored by National Museum conservators and placed on display in the Treasury in Kildare Street alongside other major national treasures such as the Tara Brooch and Ardagh Chalice. Unlike the Cross of Cong, another great treasure in the National Museum, the Tully Lough Cross does not appear to have been designed to hold a relic. Both crosses have similar outlines, with cusped arms, suggesting that the basic form was current over hundreds of years. In the case of the Tully Lough Cross a wooden (oak) upright and crosspiece were joined in the middle using a simple halving joint, secured by an iron nail. The cross arms are cusped and a number of cast and gilt bronze bosses and flat mounts are attached to the front and back, contrasted by plain tinned-bronze backing sheets. The decorative elements on the front are more ornate than those on the back. Three panels bear simple interlace patterns while two others depict a human figure between two gaping animals - perhaps an image of Daniel in the Lion’s Den - or that of Christ between two beasts, an important icon in the Early Middle Ages. The human figures are closely similar and each wears a kilt-like garment that extends below the knees. However the eyes of the uppermost figure are represented as open while those on the lower example are closed. The metal components of the cross are held in place with nails, tubular binding strips and cast animal-headed fittings. Amber studs are employed for decorative purposes on the bosses. 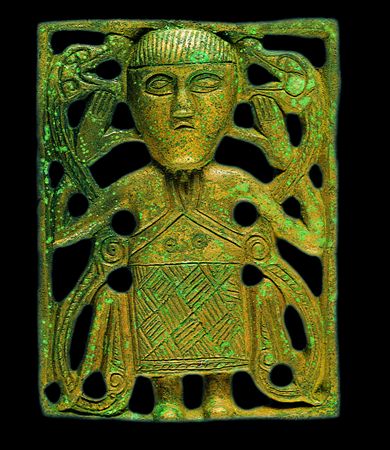 Openwork panel from the upper shaft of the Tully Lough Cross:the symbolism of the figure may be Christ or Daniel in the Lion’s Den

Whereas the decoration on the Cross of Cong owes much to the Hiberno-Scandinavian version of the so-called Urnes art style, much of the art style employed on the Tully Lough Cross is known as Ultimate La Tène. Pyramidal and circular bosses bear chip-carved decoration including egg and dart mouldings, opposed eagle-like birds, spirals that end in bird heads or in clubbed terminals, simple interlace as well as punched lentoids, dots and dot and circle motifs. On the cusped panels on the front, raised cast triskeles occur in a complicated pattern of inscribed intermeshed S-scrolls, trumpet patterns and peltas. It is possible that the cross was made in a local workshop, which may also have produced the book shrine found in Lough Kinale, Co. Longford. 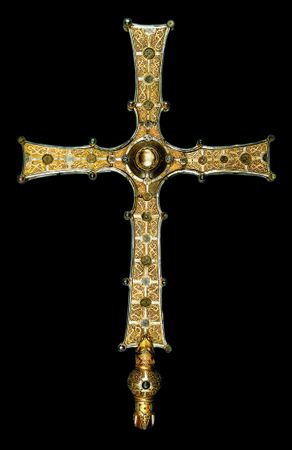 Cross of Cong made at the behest of Turlough O’ Connor, High King of Ireland, it is a cusped cross, decorated with animal interlace panels

The book shrine cover is decorated with a bossed cross with cusped arms and a number of aspects of the decoration and workmanship are closely comparable. Amber studs occur on the bosses. Animal heads that project from medallions placed on the sides and ends of the book shrine are the same animal that is represented on the mouldings placed at the joints of the tubular bindings on the cross. Originally there were sixteen of which twelve survive. Cast in the form of a long-snouted beast with two upright rounded ears, the cheeks are crosshatched with two spiral nostrils at the end of the snout.

The same animal is represented on other items of contemporary metalwork such as the Cavan brooch and the St-Germain shrine mounts but it also occurs on later objects such as St. Manchan’s shrine and the Cross of Cong. The human figure between two beasts motif can be compared with a similar figure represented on an unprovenanced 9th-century gilt silver bell shrine in the National Museum collection (reg. no. 1920:37). It also occurs on stone high crosses such as the South Cross at Ahenny, Co. Tipperary, and part of the importance of the Tully Lough Cross lies in the fact that it demonstrates conclusively the long-held view that many of the Irish high crosses were modelled on metal crosses. Bosses are a common feature on the high crosses and much of the decoration appears to be based on metalwork prototypes. The central pyramidal boss on the front of the Tully Lough Cross has a panel of opposed birds that are very similar in style and treatment to two panels of opposed animals represented on the above-mentioned bell shrine, while there are also comparable animals represented on the back of a large silver brooch of the 9th century from Killamery, Co. Kilkenny. 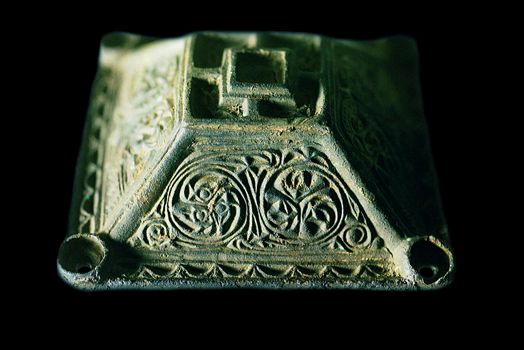 The Tully Lough Cross may have been associated with the church of Kilmore, an important Patrician foundation sited close to Tully Lough. During the middle ages the Ó Mochain family were keepers of what might have been another important altar cross, named after St Atrachta who had north Roscommon associations. The monumental scale and lavish decoration suggests that the Tully Lough Cross was paraded on important religious and ceremonial occasions. Whether it was lost accidentally or thrown deliberately into the lake is impossible to say, but the discovery in Viking graves of possible components from similar crosses may provide a pointer. The most complete of the related finds from Ireland is the Antrim Cross in the Hunt Museum, Limerick. Drawings of similar crosses occur on contemporary gospel books such as the Canterbury Codex Aureus, and the decorative style of the Tully Lough Cross is also to be found on the manuscripts.

Eamonn P Kelly is the Keeper of Irish Antiquities in the National Museum of Ireland where he has been associated prominently with efforts to recover looted antiquities. His publications include Early Celtic Art in Ireland; Sheela-na-gigs Origins and Functions. He is a contributor to the recent book Treasures of the National Museum of Ireland: Irish Antiquities.

Email ThisBlogThis!Share to TwitterShare to FacebookShare to Pinterest
Labels: Relics