The Quest for Celtic Christianity 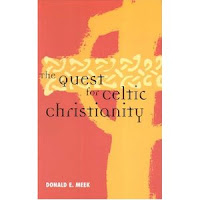 Below is a review of a valuable work by Professor Donald Meek,  a native Scots Gaelic speaker from the Island of Tiree, on the modern 'Celtic Christianity' movement.  His book exposes the differences between the popular view of the 'Celtic Church' as an anti-authoritarian, eco-friendly, woman-friendly, alternative Christianity and the view of modern scholarship which places it in a very different context. I also appreciated that as a Christian Meek is rightly concerned about some of the dubious undercurrents which flow into 'Celtic Christianity', his chapter on Alexander Carmichael's Carmina Gadelica was particularly eye-opening. Some have criticized the polemical tone of the book, but I found the writer's irritation at having his culture appropriated by outsiders who have no understanding of it perfectly reasonable. Whilst they may have been responsible for creating many of the myths which the contemporary movement still embraces, nineteenth-century Celtic enthusiasts at least took the trouble to study the indigenous languages of these islands and were able to engage with the sources at first-hand.  The Quest for Celtic Christianity is now only one of a growing number of critiques on modern 'Celtic Christianity', but for me it is still the best.

"The Quest for Celtic Christianity" by Donald Meek

One of the difficulties with being a minority culture is that it is hard to correct the misrepresentations which are created by the dominant culture, which has greater prestige, more authority and better means of communicating its ideas. As a result, minority cultures often find themselves the subject of inaccurate stereotypes. Sometimes the false image of the Other is created in order for a people to prove to themselves that they are superior to it, and other times it is an expression of a lost purity still retained by a more "primitive" people. Whatever the agenda that causes such manipulations of facts, it is no excuse for ignoring what can be learned from thorough and objective research.

These are the issues which inform Professor Donald Meek's excellent new book. Most branches of Christianity have seen congregation sizes shrink during the last century, and they are responding to this by making their church experience more appealing. Some of them are borrowing or adapting symbols, texts or rituals from other faiths or places. It is in this way that numerous groups are trying to invoke "Celtic Spirituality" or "Celtic Christianity" in their religious communities.

Meek shows in detail, however, that the truth is usually lost in the Celtic mist. The book works on two chronological fronts, revealing the realities of the Christianity that the leaders of the church actually practised and exposing the creation of the mythical Celts, especially in the 19th century, which is the source of so many modern misconceptions.

He points out a number of ways in which the false image of the Celts is created and sold to the credulous. By constant recourse to images and woolly concepts, the marketers can be highly imaginative in their definition of Celtic. By ignoring the history of the development of Christianity, they forget the bigger picture and ascribe undeserved virtues to the Celts. By selective and dubious use of English translations they avoid contact with primary texts in Celtic languages. Since most of these new sects flourish in far-away societies, they avoid direct contact with real Celts and Celtic communities.

Actually, the earliest abuse of the myth of Celtic Christianity was during the Reformation, when churches wanted to find precedents for their break with the Catholic Church in Rome. This ancient predecessor, they wanted to claim, kept itself "pure" while Rome became corrupt and degenerate. Unfortunately for the myths, which still persist to the present day among many Protestants, early Christianity everywhere adapted to a degree to secular life. There was no united and independent Church in Celtic lands, nor did the Church in Celtic countries differ in crucial matters of doctrine from the rest.

Just as many people are mistaking as "Celtic" many of the common features of pre- industrial Europe, so too are people attributing an unmerited uniqueness to the so-called Celtic Church and to Celtic saints. But these features of Celts and "Celtic Christianity", such as visions and psychic phenomena, can be found in the stories of Saint's Lives throughout Christendom as well as throughout the folk traditions of rural Europe. And just like the British Isles, Christianity as practised at the popular level all around Europe (and the world, for that matter) was a mixture of orthodoxy and pre-Christian practices.

On the other hand, too few are willing to acknowledge aspects of saints or of the church which are not so appealing in modern times. The stories of saints' lives emphasise their asceticism, their ability to destroy enemies through curses and violence, their preoccupation with sin and their uncompromising war against paganism.

It is no surprise that Meek makes comparisons with Native America, whose spiritual traditions have been misrepresented, commercialised and sold by spiritual opportunists. Native communities seldom profit from this business, and instead see outsiders take control of their traditions and proclaim themselves to be more authentic than actual spiritual leaders. Unlike many Native Americans, however, too few qualified Celtic scholars have attempted to present the historical and cultural realities to the general public such as Meek does in this commendable work.
Posted by Marcella at 06:30