On April 6 the Irish calendars commemorate the memory of one of the abbots of Clonmacnoise. As not a great deal is known of Saint Cronan as an individual, Canon O'Hanlon instead alludes in his account to the status of Clonmacnoise as a place of pilgrimage:

This Saint is called Cronan Beg, or the Little, owing probably to his want of ordinary stature. He is entered, in the Martyrology of Tallagh, at the 6th of April, as Cronbrice, Abbot of Cluana, or Clonmacnoise. The date of his birth has not been ascertained, nor does his genealogy seem to be known. This holy man most probably succeeded Colman, Abbot, who died, in the year 681. Then was his successor elected to rule, in a spot, greatly resorted to, even from distant regions. The pilgrimage to holy places is one of the oldest of Christian institutions. The first known visits were to Jerusalem, and to other parts of Judea. Thus, Helena, the pious mother of the Emperor Constantine, hastened as a pilgrim to the Holy Land, when she visited the scenes of our Redeemer's passion. The Empress returned, bringing with her the true cross, with other relics of Christ's death; and, from that time forward, pilgrimages to the Holy Land were annually made by thousands, from every part of Christendom. Our Irish countrymen frequently visited this distant land, and usually combined with their journey a pilgrimage to the shrines of the Apostles, St. Peter and St Paul, at Rome. Hardships, persecutions, and even death itself, often overtook the zealous and devoted pilgrim. The tremendous conflicts, which shook Palestine during the period of the Crusades, barred the road thither to all but the most hardy, adventurous, and daring. The subsequent loss of the Holy City, all but closed its gates against the Christians. At and before this era, the practice of national pilgrimages grew into transcendent importance. Instead of turning towards the Holy Sepulchre, the penitent wended his way, towards some shrine in his native land, famous for some deed of sanctity, or for some spiritual manifestation. In Ireland, Lough Derg, Kildare, Glendalough, and Clonmacnoise, were the great pilgrimages. The ten ruined churches, which surround St. Kieran's grave at the latter place, are said to have been the offering of ten royal pilgrims, who knelt at his shrine. Among the religious foundations here is shown, what purports to have been a church or chapel of the nunnery, said to have been built in 1170, by Dearvoirgilla, and it was consumed, with other buildings, by an accidental fire, A.D. 1180. 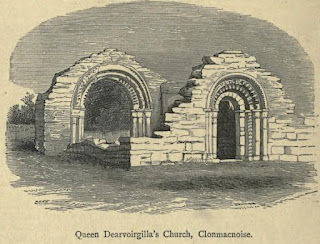 The festival in honour of Cronbeg — a contraction most probably of his regular name — who was placed as Abbot, over Cluainmic Nois, occurs, in the Martyrology of Donegal, at this date. This was the day for his death, and the year was 689, according to the Annals of Clonmacnoise, or according to those of the Four Masters, A.D. 692. The Annals of Ulster place his demise, under the year 693.