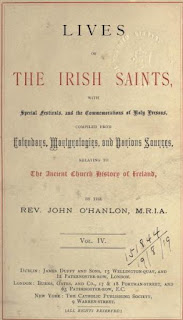 A 6th/7th-century abbot of Lann-Ela, Tetgaill (Tetghal), is commemorated on April 16. The monastery of Lann-Ela was founded by the poet saint Colman who had died roughly a century before Abbot Tetgaill, as Canon O'Hanlon explains:

We find, entered in the Martyrology of Tallagh, the name of Tetgaill Mac Colbrain, at the 16th day of April. The patronymic, given with his own proper name, does not reveal more than the name of his father: of his family line, we are ignorant. Tedgalius is the Latinized form of this holy man's name. He was born, as we may suppose, in the seventh century; but, where his education had been received does not appear. He was Abbot of Lann-Ela. This place is thought to have derived its origin from St. Colman Elo, who died in 610, and who first erected here his Lann or Church. In pagan times, the locality was called Fiodh-Elo, or Elo-wood, which is said to lie in Feara Ceall, in the country of the southern Hy- Lynally. It contains the ruins of a church; but, decidedly, these are not old, yet that wall, which encloses the graveyard, appears to be very ancient. To the south of Lynally Church stands a moat, said to contain vaults built of lime and stone. Lann-Ela has been identified with the village of Lynnally, in the barony of Ballycowan, King's County. The Four Masters make St. Tethghal Bishop of this place. There can hardly remain a doubt, that the Tethgaill here noted should not be identified with that bishop of Lynally, who is mentioned, in our Annals. He appears to have died, on the 16th of April, A.D. 709. The same date has been assigned for his death, by the local ecclesiastical historian. The festival, in honour of Tetghal, was celebrated, on this day, as we read in the Martyrology of Donegal. At the xvi. of the May Kalends, which corresponds with the 16th day of April, the Irish Calendar, now preserved in the Royal Irish Academy, has a peculiar notice of his festival and period.

Thanks very much for your support and for the link.