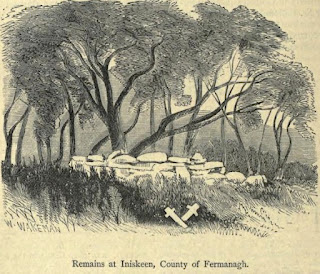 A saint from the lakeland county of Fermanagh, Mochaemhog, is commemorated on April 13. He was an abbot of the island monastery of Inis Caoin, anglicized as Iniskeen, but we do not have many other details of his life, as Canon O'Hanlon explains:

THIS holy man is recorded in the Martyrology of Tallagh, at the Ides or 13th of April, as Mocammoc Innsi Cain. There is an allusion to him, by Colgan, under the Acts of St. Mochoemog or Pulcharius [feastday March 13]. We are told there, that this holy man was the son of Endeus, son of Cormac, and belonging to the Colla Dachrich race. He flourished on Iniscaoin Island, about the middle of the seventh century. He was Abbot over Inishkeen, on Lough Erne, in the county of Fermanagh...A commemoration has been made of St. Mochaemog, by Marianus O'Gorman, at the present day. Likewise, at the same date, as we read in the Martyrology of Donegal Mochaemhog, of Inis Caoin, had veneration paid him. A similar notice is to be found, at the 13th of April, or at the Ides of this month, in that Irish Calendar, preserved in the Library of the Royal Irish Academy. However, these brief notices give us no particulars, that could afford us any light, regarding his personal history.