On April 29 we commemorate the memory of Saint Patrick's first convert in the Lecale district of County Down, Dichu of Saul. Hagiography records that Dichu was a pagan chieftain who was initially committed to seeing off the threat posed by the new religion and its apostle. Following his conversion, however, he presented Saint Patrick with a barn to use as a church. The memory of this gift lives on in  the placename Saul, anglicized from the Irish sabhall. I have some photographs of Saul and other Patrician sites of County Down at my other blog here. Canon O'Hanlon has this account of Saint Dichu in Volume IV of his Lives of the Irish Saints:

IT has been very generally supposed, that the first convert made by the illustrious Apostle of Ireland, after his mission had opened in Ulidia, was Dichu, or Dichus, or Dichuo, sometimes written Diochu, and Dichon, who lived in that district, comprising the present Barony of Lecale, in the county of Down. The particulars of his conversion have been already alluded to, in the Life of St. Patrick. His early neophyte, having once embraced the faith, afterwards led a most exemplary life. In the published Martyrology of Tallagh, however, there is no notice of this pious convert, at the 29th of April; although the Bollandists refer to that calendar, and at that same date, for the entry Dichus de Sabhall. In Irish ecclesiastical history, he has attained much celebrity, and his story has often been related. He descended from a distinguished family, who belonged to the northern part of Ireland; and there he appears to have been born, perhaps, about the close of the fourth, or the beginning of the fifth, century. His father is said to have had a very numerous family of sons, whose names have been placed on record. Thus, we are informed, that Trichem, a chief of Uladh, had seven sons, viz., Dichu of Sabhall, or Saul, Laeghaire of Dun, Ailill of Magh-bile, or Moville, Duirthecht of Aendruim, or Mahee Island, Eoghan of Cillcleithi, or Kilclief, Ros of Dundalethglas, or Downpatrick, and Niall of Cillcleithi, or Kilclief. These were of the race of Fiatach Finn, the ancestor of the Dal Fiatach, a strictly Ultonian tribe. The patrimony of Dichuo seems to have been near the southern shore of Lough Cuan, now Lough Strangford, and where a small river, formerly called the Slaney, enters into the sea. There, he had a swineherd employed, who, on the arrival of St. Patrick and of his companions, gave the alarm to his master. He thought these strangers were to be regarded as thieves or pirates. Jocelyn relates, that when St. Patrick first opened his Irish mission in the north, which is generally thought to have been A. D. 432, a certain man named Dichu, who was powerful of strength, gigantic of stature, and savage of mind, occupied the district in that quarter where the Irish Apostle landed in Ulidia. Dichuo brought dogs to attack the voyagers, but he was unable to succeed in his purpose. As when the prophet sent from Juda to Bethal was opposed by the king sacrificing to idols, and when Jereboam stretched forth his hand against the man of God, the king's hand withered, so that he was not able to again withdraw it, until the prophet interposed in his behalf; so, it would seem, such a miracle took place, in the case of Dichuo. St. Patrick and his companions are said, by Probus, to have landed, at an island, called Milchon; but, this seems to be a mistake for Mag-Inis, a low-lying island in the district known as Leth-Cathuil, or Lecale. This chieftain brandished his sword intending to destroy the saint. But, the Lord interposed his protecting arm, all Dichu's strength withered, and he entirely stiffened, so that he could move, neither his foot to go forwards, nor his hands to strike. Experiencing such a miracle, suddenly Dichuo changed into another man; and from being proud becoming humble, his fierceness was changed into mildness, from an infidel, he became a believer, with all his household, at the preaching of St. Patrick, and he was baptized in the Christian faith. As his soul was then loosed from the chains of sin, so were his limbs loosed from their heaviness, and all their strength was restored unto them. Thus, he who had been the first and principal opposer of the Faith in Ireland, became its first professor, and even to his latest age, he continued its most devoted follower.

To atone for his former obstinacy, Dichu presented a place, called Sabhal, now Saul, where St. Patrick might erect a church. To this proposal, the great Irish Apostle most willingly assented. Dichu requested it might be erected in a direction, lying north and south. On account of some peculiarity in its position, or use, the name Sabhall, which means "a barn," was probably applied to the original church. This church of Saul was the first founded, by St. Patrick; its ground was the first consecrated and offered in Ulster, for a religious purpose; while its donor Dichu was the first convert known, in that part of Ireland. The year 432 is said to have been that for its first ecclesiastical appropriation; and, it was probably erected, under the personal supervision of St. Patrick and by his band of missionaries. After the foundation of this first Irish church, St. Patrick went northwards, to visit his former master Milcho, or Miliuc; but, he failed in effecting a conversion, and afterwards, he came back to the house of Dichu, in the plain of Inish. In that beautiful country around, St. Patrick wrought many miracles, and preached the Gospel, while he received many professions of the true Faith from the inhabitants. The monarch of Ireland, King Leoghaire, detained two of Dichuo's sons as hostages at that time, and he decreed, that they should be put to death, because their father had given sanctuary and protection to St. Patrick. However, owing to the holy prayers of the Irish Apostle, both of those young nobles obtained their freedom. We have no further account of Dichuo, in the various Lives of St. Patrick; but, it is reasonable to conjecture, that the local dynast passed his days at or near Saul, where it seems probable he died and was buried. In process of time, St. Patrick built there a suitable monastery, to which he introduced monks, who had passed their novititate under him. For their use, not long afterwards, and through his prayers, St. Patrick produced a fountain out of the earth. Over that monastery of Saul did he appoint his disciple, St. Dunnius, to be Abbot. When the holy Apostle had returned from his mission—most probably in the south of Ireland—he dwelt with Dunnius not a few days. 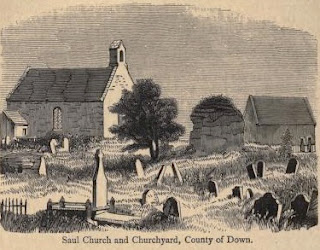 The feast of St. Patrick's disciple Dichuo has been assigned, to the 29th of April, by Father John Colgan. At this date, also, he had intended to dilate on Dichuo's Acts. St. Dicha is set down in Henry Fitzsimon's List of Irish Saints, but the date for his festival is not recorded. On the 29th day of April was venerated, Diochu, of Sabhall, as we read in the Martyrology of Donegal. It is likely, says the calendarist, that this is the Dichu, son of Trichem, descended from the race of Fiatach Finn, monarch of Erin; and that it was he, who gave Sabhell, to Patrick ; and that it was on him Patrick bestowed the famous blessing, by which he promised Dichu the kingdom of heaven. In the quatrain, which may be found in the Life of Patrick, and as translated into English, it is written: -

"The blessing of God on Dichu,
Who gave me the Sabhall;
He shall be thereafter
Heavenly, splendid, most famous" &c.

As if doubting his own identification, the author then adds: there is a Modichu, we are told, descended from the race of Brian, son of Eochaidh Muighmhedhoin. It may be, that he is identical with this Dichu, as some, say the O'Clerys, understand. This latter opinion, however, seems inadmissible, for that Modichu was brother to St. Bairre, of Cork, and son of Aimergen, who was ninth in descent from Brian, son of Eochaidh Muighmedhain, and who was the founder of a distinguished Connacian family. On the other hand, it may be questionable, if Dichuo has been ranked among the saints of our earliest calendars; although, his conversion and subsequent life, according to nearly all the ancient Lives of St. Patrick, give him a claim on our consideration, as a special benefactor of Christianity in our Island, and as the the true and loyal friend of her great Apostle.