January 18 is the feastday of Saint Dicuil, (Desle, Deicola) founder of Lure, a monastery famed for its learning across many centuries. Saint Dicuil was one of the missionary companions of Saint Columbanus, and his story is one of those explored by Margaret Stokes in her book on the remains of Irish saints in France: 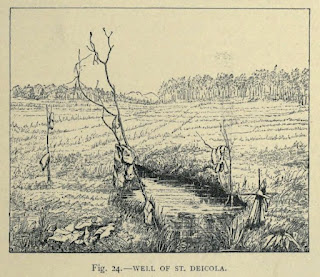 THIS saint was a native of Leinster, and first became a friend of St. Columban at Bangor in Down, where he was distinguished for his learning and piety, and Columban conceived a great love for him. One day he said to Deicola, "How does it happen that your face is always shining with joy, and nothing seems to trouble your soul? " And Deicola answered, "It is because nothing can ever part me from my God." Though an older man than St. Columban he followed him on his pilgrimage, and lived with him at Annegrai and at Luxeuil. In the year 600, when St. Columban and his Irish monks were expelled from Luxeuil, St. Deicola hoped to be able to follow his master into banishment; but he had not gone more than a few miles along the valley of the river Ognon, when his strength broke down at a place called Vepras, near the town of Lure. He was an aged and infirm man at this time, and, throwing himself at the feet of St. Columban, he prayed him to let him finish his earthly pilgrimage among the trees of the forest in which they found themselves. The sorrow of Columban was very great at the thought of leaving his oldest friend, and one whom he so honoured, alone in the wilderness; but, setting the will of God before his own, he answered, saying, "May the Almighty Lord, for the love of whom you have left your native land, grant that we meet before His face in heaven." At these words St. Deicola, knowing that the hour of parting had come, fell upon Columban's neck, and said, " May the Lord bless you all the days of your life with all the blessings of Jerusalem." Then St. Columban went on his way, and St. Deicola remained in the forest alone. It was in a vast expanse of country, only peopled by wild animals; tract beyond tract of marshy and uncultivated ground. Here, without human help, but sustained by his sure faith, Deicola cast his care upon the Lord, and then plunged into the woods to seek a place where he might build his house. He remained without food or drink until the next morning. Kneeling on the ground, he struck it with his staff, and a fresh stream of water sprang forth, from which he drank. He then rose up refreshed, and continued his way until he reached a clear space in the forest, where a herd of swine were feeding. The swine-herd, who was in charge of them, was startled at seeing this old man, of unusual height and noble presence, clad in a strange costume, come forth from the wood. He said, "Who are you, and whence do you come? What do you seek in these wild places, coming thus without guide or companion?" "Fear nothing, my brother," said Deicola ; "I am a traveller and a monk, and I ask you in charity to show me a place where I may build my cell." The swine-herd replied that he only knew of one spot, called Lutra (Lure), a very marshy place, where he would have plenty of water. " But I cannot be your guide," he added, "for my herd would stray away in my absence." Deicola looked at the swineherd, and answered, "Here, my son, take my staff, and fix it in the ground, and it will take thy place with the swine, and guard them till thy return." So saying, he planted his staff in the ground, and the swine crouched in a circle round it. The swineherd followed the old man, and led him to the site he had spoken of, where the saint fixed his tent beside a well. When the swineherd returned to his herd he found them as he left them, grouped around the staff.

The solitude of the saint was broken one day by a visit from King Clothair II. This prince, now head of the Frankish monarchy, had gone out hunting in the ancient forest of Sequania, and was in pursuit of a huge boar, who sought refuge in the cell of the old monk. The beast, terrified and panting, crouched at the feet of Deicola, as if in search of pity and protection, and the saint, laying his hand upon his head, said to him, "Since thou hast sought charity here, thou shalt find safety also." He then went and stood at the door of his cell; the pack of hounds came on at full speed, baying loudly, but suddenly stopped before the door, as if they were afraid to advance. The huntsmen hurried to tell the king, who approached that he might see this miracle. When he learned that Deicola was a friend of Columban, whose name he had always honoured, the king left off his hunting that he might sit some while in the cell of the old recluse. He asked, " What are your means of living, and how do your brethren fare in such a wilderness as this?" "It is written," said St. Deicola, " that they who fear God shall want for nothing. We are poor, it is true, but we love and serve the Lord; that is of more value than much riches."

Some time after this event King Clothair made a solemn grant to this rising community of all the forests, pastures, and fisheries possessed by the fiscal in the neighbourhood of Lure; to these he added a town named Bredana, with its church and vineyard of St. Antoine.

When Deicola (Desle) first settled here, he found that there was a church dedicated to St. Martin, on the summit of a neighbouring hill, to which the lord of the district, Werfarius, had appointed a priest for the holy office, and to this sanctuary Deicola went by night to offer praise and prayer to God, and each night that he approached the door was opened by angels for him. But the priest in residence was displeased when he heard this, and said to his congregation, "I will remain here no longer because of this itinerant monk. He lies hidden in the forest all day, and then comes forth at night, and by some unknown enchantment the door of this temple opens at his approach." The people advised patience, saying, "The truth will come to light some day. If this monk's power be of God we cannot hinder him ; if it prove otherwise, we shall treat him as an impostor, and drive him pitilessly forth from our land."

So Deicola (Desle) continued to pray in the church of St. Martin by night, and the fame of his miracles and holy life inflamed the anger of the priest against him, so that he closed the doors and windows of the church with thorns and branches; nevertheless, the saint kept on his nightly vigil without hindrance. The priest appealed to the lord Werfarius, who was of a cruel and angry temper, and who was then living in his castle of Analesberg, or Lawesberg, near Chalonvillars, south-east of Belfort. He commanded that Deicola should be seized and chastised; but no sooner had the order gone forth, than the prince was seized with a mortal illness and died. His wife Berthilia, seeing the hand of God in this, sent to entreat the saint, whom her husband had unjustly condemned, to come to her aid.

When Deicola arrived he was weary and heated by the long journey, and seating himself, he took off his cloak. A servant advanced to lay it down, when suddenly it was seen suspended in the air, hanging on a ray of sunlight that had penetrated into the chamber. Seeing this. Berthilda threw herself at his feet, and praying for her husband's soul she sought to repair his cruelty to the saint by endowing his church with land and with the Church of St. Martin. Thus enriched, a spacious monastery arose at Lure in a few years, where men of one heart and one soul kept up the Laus perennis night and day, and spent their days in labour and in prayer. Two churches, one dedicated to St. Peter, the other to St. Paul, were added to the buildings.

When all these things were accomplished Deicola, feeling his end approach, called his follower Colombin and his monks to his side, and they took the last Sacrament together; then he spoke to them in wise and touching words, bidding them of all things to remember charity, and with fervour to strive against the difficulties that beset the way to heaven. Having parted from each of his children with a loving embrace, he fell asleep on the 18th of January, A.D. 625, and his disciples buried him with honour in the place where he had died, in the Oratory of the Holy Trinity.

The saint seemed to live again in his follower Colombin, and the fame of Lure was spread throughout Franche Comte and into the Vosges and Alsace. And thus it was that St. Deicola laid the foundations of this great abbey of Lure, which ultimately became one of the richest abbeys of France, and which twelve centuries later numbered princes of the Roman Empire among its abbots.

Margaret Stokes, Three Months in the Forests of France - A Pilgrimage in Search of Vestiges of the Irish Saints in France (London, 1895), 41-44.

Marvellous stuff. And I had no idea Margaret Stokes wrote this book.