The Daughters of Comgall, January 22 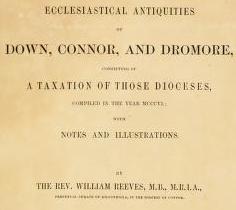 The earliest Irish calendars - the Martyrology of Oengus and the Martyrology of Tallagh- both make reference to a feast on January 22 of the daughters of Comgall - Lassir, Columba and Bogha - and associate them with the church of Glenavy in County Antrim. The origin of this northern church is mentioned in the Tripartite Life of Saint Patrick, where it was first known as Lettir-phadraic but later as Lann Abhaigh. Canon O'Hanlon brings together the evidence from the sources for us before concluding with a triumphal flourish:


The Daughters of Comgall, Colma, Bogha, and Lassara, of Glenavy, County of Antrim.

The Martyrology of Tallagh mentions a festival on the 22nd of January in honour of Comghaill's daughters, Lassir, Columba, and Bogha. Some confusion in rendering their names appears to have crept into our calendars. According to the Martyrology of Donegal, on this day was venerated Colma, also called Columba, Bogha, and Laisri, three sisters. These virgins belonged to the sept, and were daughters of Comhgall, son to Fianglach. They were buried and venerated at Leitir Dal-Araidhe; they were disciples—or, according to another version, foster-children—to Comhgall of Beannchair, or Bangor. According to the poem beginning "The Hagiology of the Saints of Inis-Fail," they are of the Dal m Buain, the race of Eochaidh, son of Muireadh. The place called Lettir in Dalaradia was anciently known as Lettir-Phadruig, after the Irish Apostle St. Patrick, who there first built a church. From the disciple, called Abhac, placed over it, Lann-Abhaich, Lan-avy, and finally Glen-avy, were titles given to this spot. It is a parochial church in the diocese of Connor, and in the ancient territory of Delmunia. It is said, that the present church does not occupy the original site; but that old Glenavy churchyard lay at some distance, in an angle formed by the Glenavy and Pigeonstown roads. Yet this account seems inconsistent with an existing tradition. Glenavy parish is situated within the barony of Upper Massereene, and in the county of Antrim. At a place called Camus Comhgaill, those holy women are also said to have been venerated. This, by others, is also thought to be the spot where their bodies had been interred. The holy virgins' names are included in the calendar compiled by the Rev. William Reeves. They are likewise entered in the Kalendar of Drummond; but, apparently in a most incorrect manner, at the xi. of the February kalends, which corresponds with this date. Thus in early ages, and in the same family, we find many saints, while from the fifth to the eighth century Ireland appeared to realize the glorious vision of a church which St. John had in Patmos.

O'Hanlon also contacted the then parish priest of Glenavy who in a letter dated 2nd May, 1873, furninshed some further local detail which appears in a footnote:


There is no vestige of the old church of Glenavy. A tradition exists, that the Protestant church is on the site of the old one. It is divided by a river from what is supposed to be the old cemetery, where, according to Reeves, were buried the three sisters. These are said to be the sisters of St. Comgall, abbot and founder of Bangor. He came from Maheramorne, near Lame. Perhaps there was a religious house in Glenavy, to which the three sisters retired. There is no ruin whatever on the spot.

Reeves is Bishop William Reeves, an Anglican scholar who produced a most useful volume on the ecclesiastical history of the northern dioceses. He too quotes from the sources beginning with the Martyrology of Oengus on January 22:

Their names are given in the Calendar of the Clerys at the same day:

"Colman, Bogha, et Lassera, three sisters, and three virgins, and they were foster children to Comghall of Bangor, and they are [interred] at Lettir in Dalaradia; or [according to others] it is at Camus Comghaill they are [resting]".

Their descent also is given by Colgan :