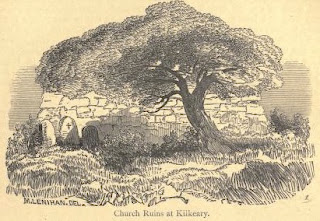 January 5 is the feast of Saint Cera of Kilkeary. My previous posting on Saint Cera was the account from The Lives of the Irish Saints, now we have another, this time from Canon O'Hanlon's predecessor, Father John Lanigan. Father Lanigan wrote a four-volume ecclesiastical history of Ireland in the 1820s and often took quite a critical and sceptical tone regarding the work of earlier authorities such as Colgan and Archdall. Some of his instincts and insights were quite correct though and his work is still very readable. Lanigan's style was to write a paragraph and then provide copious notes to back up what he had said, as you will see from his account of Saint Cera:

The holy virgin St. Cera, alias Chier, died in 680. (155) She is said to have been the daughter of one Duibhre, and of an illustrious family of Muskerry in the now county of Cork. It is supposed that she was the St. Chier, who, together with five other virgins, applied to St. Fintan Munnu, when residing in Heli (Ely O'Carrol) for a situation to establish a nunnery, and to whom he is said to have assigned the place, where he had lived himself, afterwards called Tech-telle. (156) That St. Cera spent some time in this place I do not find any sufficient reason for denying; (157) but it is very doubtful whether she got it from Fintan Munnu, or whether he had ever resided there. (158) How long she remained in Heli we are not informed. Returning thence to her own country she founded a nunnery, called, from her name, Killchree, now Kilcrea, (159) a few miles S. W. from the city of Cork, which she governed until her death. The reputation of this saint was very great, and her festival was kept at Kilcrea not only on the 5th of January, the anniversary of her decease, but likewise on the 16th of October, as a day of commemoration.

(156) Archdall places Tech-Telle or Teaghtelle in the county of Westmeath, because Colgan says that, from having been in Heli, it afterwards was comprized in the western Meath, But by western Meath Colgan, and the older writers whom he quotes, understood not only the present Westmeath, but likewise the King's county, in which Tech-Telle ought to be placed, whereas no part of Heli ever extended as far as what is now called Westmeath. Tech-Telle, or the house of Telle, got its name from St. Telle, son of Segen, who was contemporary with Fintan Munnu, and accordingly lived in the early part of the seventh century, and whose memory was revered on the 25th of June. (See AA. SS. p. 15. and 713.) Archdall has for this saint another Teach Telle at Teltown in the county of East Meath. And why? Because Colgan, speaking of him (at 713 ib.) places Teach-Telle in Midia, or Meath in general. But he had elsewhere (p. 15.) observed, that the part of Midia, in which Teach-Telle lay, was the western; and we have just seen that it was in the tract now called the King's county. It is plain, on comparing the passages of Colgan, that he knew of only one Teach-Telle. As to Teltown, a place not far from Kells to the East, there is no reason to think that it owes its name to any saint, and it is more than probable that it is the same, at least in part, as the ancient Tailten, celebrated for the sports held there in former times. (See Not. 6. to Chap, v.)

(157) She is stated to have been in that place before it was occupied by St. Telle. The only difficulty is that Telle flourished before the death, in 635, of Fintan Munnu. But St. Cera seems to have been young at the time she is said to have been there. Supposing that this was about 625, her having lived until 680 contains nothing contradictory or unchronological.

(159) Colgan, in the Acts of this saint, which he has endeavoured to patch up, pretends that she had founded the nunnery of Kilcrea, before she went to Heli. The only reason, that appears for this position, is that he thought, and indeed very strangely, that she was the St. Ciara who is mentioned, in the Life of St. Brendan of Clonfert, as a holy virgin, contemporary with him, and living in Muscrighe Thire. He confounded Muscrighe Thire with the Muskerry of Cork, not recollecting, as he often does elsewhere, that the former was the tract now called Lower Ormond in Tipperary, whereas the latter was known by the name of Muscrighe Mitine. This is not the worst part of his hypothesis; for he knew that St. Brendan was dead since 577. And yet he would fain make us believe that a person, who lived until 680, was a distinguished saint in his days. To enable us to swallow this anachronism, he says she might have reached the age of 130. Harris was so led astray by this stuff, that he assigned the foundation of Kilcrea to the sixth century. Archdall says nothing (at Kilcrea) about the time of this foundation; but (at Teachtelle) he introduces St. Cera building an abbey, as he calls it at Teachtelle, before the year 576. Passing by these absurdities, I shall only add that, if there was a St. Ciara or Cera in Brendan's time, she was different from the one of Kilcrea, and that she belonged to Lower Ormond. Colgan observes that, besides the St. Cera of Kilcrea, three other holy virgins of the same name are mentioned in the Irish calendars.

Very interesting. We are a Spanish couple whose niece has been named Keira and wanted some information about this Saint. Thank you for your work. Great blog!

Glad you found it of interest.