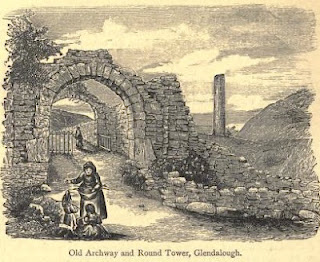 January 8 is the feast of a seventh-century Bishop of Glendalough, Saint Molibba. As Canon O'Hanlon explains, Molibba was said to have been the nephew of and successor to Glendalough's founder Saint Kevin. We may have known more details of his life if some of the work of the 17th-century hagiologist Father John Colgan had not been lost:

St. Libba, better known, however, with the Irish prefix Mo which signifies My —as applied by our ancestors to a person for whom great love or reverence had been entertained—was born of respectable parentage. His father's name was Colmad or Colman, as he is differently named; his extraction had been derived from the family of Messin-corb, that ruled over a district of country within bounds of the Leinster province. His mother was named Coeltigerna, the daughter of Coemlog, and she was descended also from the Messin-corb family, according to one account. Yet this statement regarding the saint's parents is contradicted by another: his father being called Arad of Dalaradia, and his mother Coemoca, the sister of St. Kevin. Here there would seem to have been some ambiguity in naming the present saint's mother. However, besides a sister named Arbhinnia or Coemola, Coeltigerna had three distinguished saints, who classed as brothers; namely, Saints Kevin, Abbot of Glendalough, Mochemius, otherwise called Natchchaoimhe, Abbot of Tirdaglass, and Coeman, Abbot of Annatrim, Queen's County. In addition to our saint, his parents had three other sons. All of these were distinguished for their sanctity: and they were named respectively, St. Dagan, Bishop of Achad-Dagan, or Inverdaoile, St. Menocus, or Enanus of Glennfaidhle, and St. Mobaius, whom it appears difficult to identify with any known saint of this name, to be found in our calendars. St. Molibba is said to have flourished during the early part of the seventh century, and most probably he spent some time under the direction of his holy uncle St, Kevin, at Glendalough.

After the death of his uncle, St. Kevin, which took place in the year 618, or 622, according to Usher, our saint is believed to have succeeded him in the see of Glendalough. Such is the statement of Colgan; but Dr. Lanigan seems inclined to think, that Molibba was the first bishop over this see, St. Kevin having only been an abbot. Molibba ruled over his charge with great prudence and virtue, and he departed this life — or at least he is honoured — on the 8th day of January. We are not told the exact year of his death, by Colgan. He intended, perhaps, to state this in notes, which he designed appending to his short notice regarding this saint.

These comments, numbering fourteen or fifteen, were lost through accident; yet, it would appear, Colgan had hopes of recovering them, since he directs the reader's attention to addenda, at the close of his work. The omitted notes are not to be found there, however; and most certainly they must be regarded as important, in elucidating some particulars, relating to our saint's meagre biography.

Elsewhere, we shall have occasion to record the acts of his sainted relations. We read in the Martyrology of Donegal, that Molibha, of Glenn-da-locha, bishop, had a festival on this day. This saint is entered likewise in the Martyrology of Tallagh, on the 8th of January, under the designation of Molibha Mac Colmadha. Frequently hereafter, we shall have an opportunity to introduce notices of saints connected with the ruined city of Glendalough.