Saint Hilary of Poitiers and the Irish Church 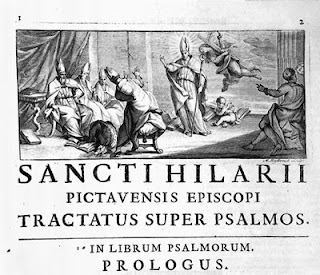 January 13 is the feastday of one of the great Western fathers of the Church- Hilary of Poitiers. As Canon O'Hanlon remarks in his Lives of the Irish Saints:

The Irish, from the very earliest period of their Christian initiation, entertained the highest veneration for this illustrious saint. They even contrived to spread his fame in Scotland, and on the Continent of Europe.... Into biographical particulars, the scope of this work will not enable us to enter; but as many ancient offices, antiphonaries, and calendars of Ireland have his name inscribed, we could not wholly omit to notice him.

The Martyrology of Oengus records:

13. We shall have their blessing!
a strong prayer without importunity:
Sulpicius (Severus) famous, delightful,
(and) Hilary abbot of Poitou.

Saint Oengus has thus acknowledged the link between the abbot of Poitiers and the biographer of Saint Martin of Tours, Sulpicius Severus, because his writings also helped to promote the cult of Saint Hilary. The Life of Saint Martin by Sulpicius Severus was a well-loved text in Ireland and a complete copy of it is preserved in the Book of Armagh, written about the year 900. But Saint Hilary also features in a number of other sources which I will summarize below:

1. The Irish Liber Hymnorum. Saint Hilary is credited with being one of the first hymn writers, who introduced some of the hymnology of the Eastern Church when he returned to Europe. He is thus credited with the authorship of one of the most popular hymns of the Early Irish Church - Hymnum Dicat Turba Fratrum, a hymn on the life of Christ. This hymn is preserved in ten different manuscript sources dating from the seventh to the thirteenth century. It is the very first hymn transcribed in the Bangor Antiphonary, where it appears under the title Ymnum Sancti Hilari de Christo, five other manuscripts also attribute it to Saint Hilary as does the ninth-century Hincmar of Rheims. The 19th-century translators of the Irish Liber Hymnorum accepted the attribution of this hymn to Saint Hilary, but modern scholars have argued that it may actually be the composition of a native author. Such is the view of Father Michael Curran, MSC, who writes:

I believe that Hymnum dicat was written by an Irish man at the end of the sixth century. .. Prudentius had written a hymn on the life of Christ .. An Irishman got to know this hymn and liked it so much that he decided to write a similar work, one that would be at once simpler and more in keeping with the needs and aspirations of Irish prayer.

The popularity of the hymn in Ireland testifies to the signal success of the author; the hymn became the favourite expression of Irish piety and prayer of Christ the King. They, or perhaps the author himself, gave St Hilary the honour of writing it, and no doubt this too contributed to its authority and popularity. Irish monks propagated it in Britain and on the continent from the seventh century onwards. It was known and cited by Hincmar of Rheims and by Bede, and its presence was felt in Spain possibly as late as the tenth century.

Yet, even if it is true that the Hymnum Dicat is an Irish composition, it is still indicative of the respect which Saint Hilary commanded in Ireland that authorship was attributed to him.

2. The List of Parallel Saints. Staying on the theme of Saint Hilary as a hymnographer, it is worth noting that in the list of parallel saints, Saint Sechnall, reputed author of the hymn in praise of Saint Patrick, Audite Omnes Amantes, is equated with Saint Hilary. The list records: Hilary, bishop and sage = Bishop Sechnall.

3. Irish Psalm Commentaries. Saint Hilary in his role as a patristic commentator on the Psalms was also well-known to the Irish Church. The Irish from early times referred to the Psalms as 'the three fifties', a designation already used by Saint Hilary. He is cited as an authority in the Treatise on the Psalter in Old Irish and texts of Saint Hilary are used along with those of other Church Fathers in other Irish commentaries. Father Martin McNamara's collection of studies The Psalms in the Early Irish Church published in 2000 contains details of these various texts. Curiously he too suggests that in addition to the actual Saint Hilary of Poitiers there may also have been an Irish Hilary, as some of the texts and views attributed to 'Hilary' in these sources cannot be traced back to the saintly bishop of Poitiers. Indeed on at least two occasions, the author of the Treatise 'attributes views to Hilary that are the direct opposite of those held by the saint'.

4. The Stowe Missal. Saint Hilary appears in the litany of the saints which is part of the eucharistic rite preserved in the Stowe Missal. He was not part of the original text of the Missal, which confined the group of saints to the Mother of God and the Apostles, but was added by a later scribe Moel Caich. He expanded the Litany to include some famous names of the universal church - Saints Stephen, Martin, Jerome, Augustine, Gregory and Hilary- before going on to list over twenty Irish saints. Thomas O'Loughlin in his study, The Stowe Missal: The Eucharist as Refreshment, comments:

That he should include 'the greats' of the western church is not surprising: the cult of Martin was ubiquitous, Steven as first martyr likewise, and in a monastery the great writing saints Jerome, Augustine, Hilary and the monk-doctor Gregory would have been the saints held in the greatest honour for their wisdom and holiness.

5. Personal Devotion to Saint Hilary by Irish Saints. As a final testimony to Irish regard for Saint Hilary, there is the personal devotion by one particular Irish saint, Fridolin, an early missionary to Europe. He commenced his labours in Poitiers and was so devoted to the memory of its patron that he sought out the lost relics of Saint Hilary. Fridolin had a vision of Saint Hilary in which the location of the relics was revealed to him and he was able to have them solemnly translated into a shrine at the restored church at Poitiers. Saint Hilary further appeared to the Irishman and directed him to journey on towards Germany, where he eventually founded the monastery of Säckingen, dedicated, of course, to Saint Hilary.