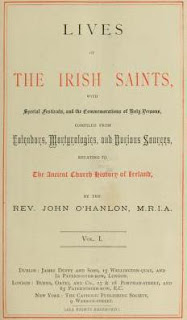 Saint Maccallin, commemorated on January 21, was a tenth-century monastic who laboured in northern France and Belgium. It is possible to see the abbey of Saint Michael where he served as abbot here. Canon O'Hanlon records what is known of him, including the usual difficulty of whether as a 'Scot' the medieval writers intended to convey the earlier usage of Scotia which applied to Ireland rather than to Scotland:

The acts of St. Maccallin—so far as they are known—have been compiled by the Bollandists, and by Colgan, while they are found in the Benedictine collection. From these sources, also, Bishop Challoner has published a brief account of this holy man. A goodly-sized volume, relating to his "gests," had been once preserved, as the monks at Wasor had assured Colgan, but this unfortunately has been lost. The Bollandists read a life of St. Maccallin; this however was filled with wondrous and incredible prodigies, although nowhere in it was there any mention of his festival. The Bollandists consider, that the name of this saint, as differently rendered Makkallinus, or Maccallinus, Makalinus, Malcallinus, Malcalanus, Malacanus, seems from its Irish or Scottish compounds capable of being rendered," Son of Chilian," "of Kalan," or " of Kalin." Colgan states, that he should be most correctly named Malcallan, a name found more than once in our Irish annals.

This holy servant of God was an Irishman by birth. However, it has been stated, that Malcalin, said to have been Abbot of Verdun, and venerated on the 21st of January, was a native of Scotland. Dempster allows, notwithstanding, that he was educated in Ireland, where he lived under a regular discipline or rule. In the earlier half of the tenth century, St. Forannan, had already left our island, and directed his course to Flanders. Here he was called to assume the government of Wasor monastery, on the River Meuse. Going through Britain about the year 946, with St. Cathroe, St. Fingen, St. Lazarus, and with other pious companions, St. Maccallen sought the shrine of St. Fursey at Perrone. They were hospitably received and entertained by Herswindes, a noble matron. She was wife to Count Filbert, who dwelt not far from Perrone, in Picardy. Those holy pilgrims had signified their desire for leading a solitary life in some proper place, where they might freely serve our Lord, and live by the labour of their hands. Their benefactors recommended St. Malchallan to Agnoald, who was abbot over Gorze, in Lorraine. Under this holy superior, Malcallan became a professed monk. Cathroe sought another pious destination. Previous to this course, however, those thirteen Irish companions who had arrived in France, seemed by common consent to have resolved on selecting St. Cadroe as their superior. St. Malcallan's powers of persuasion were chiefly used to secure his consent. This could not be obtained, however, owing to the holy man's true humility. The fellow-voyagers appear for a considerable time to have been maintained through the bounty of their noble patrons, who pointed out to them a place in the wood of Therasche, which might be suitable for their retired manner of living. This spot was dedicated to the holy Archangel Michael, and there they built dwellings. The count and his wife contributed to their comforts and convenience in every possible way. Those religious finally chose Malcallan for their superior. Under his conduct, for some time, they were exercised in watching, fasting, and prayer. St. Cathroe, the chief of his companions, desiring greater perfection, chose to embrace for his manner of life the Benedictine institute. At that time St. Benedict's rule was observed in its full vigour at the celebrated monasteries of Fleury in France, and of Gorze in Lorraine.

After St. Cadroe and St. Malcallan had made their respective professions, the good lady, Herswindes, desired and obtained their return to Thierasche. There St. Malcallan was constituted abbot over St. Michael's Monastery. This her husband, Count Eilbert, had founded in that forest. The Count established another great monastery, at Wazor, upon the River Meuse. It lay between Dinant-and Huy. This he gave to the same saint. Both of these abbeys Malcallan governed for some time, in such manner as to unite most perfectly the care of his own sanctification with the perfection of that religious community committed to his charge. At last, finding it too great a burthen to govern, at once, two distant monasteries, he resigned that of Wazor to St. Cathroe. Then Malcallan lived retiringly in St. Michael's Monastery, at Therasche. Some have affirmed, that St. Malcallan was abbot over St. Michael's Abbey at Verdun. But this is a mistake of many writers who followed the "Martyrologium Anglicanum." There was no abbey of St. Michael at that place, as shown by Menard, who properly observes, that his veneration at the Church of St. Michael the Archangel was not in Verdun. Thus Ferrarius states, and he adds, moreover, that in Lotharingia, this Abbey of St. Michael, over which Makalin had been abbot, was placed. Saussay and Wion made a similar mistake. About the year 975, St. Cadroe is said to have died, when the government of his community devolved once more on St. Maccallin. It is generally believed, he was the third abbot over Wasor, in the order of succession.His elevation and enthronement were attained with the common assent of the Bishop of Metz, and of all his own subjects. He obtained the rule of souls and the care of those pertaining to him in the Basilica of St. Michael. At Therasche this holy abbot went to bliss in the year 978, as Flodouardus, a contemporaneous writer, records: "The man of God, Malcallan, an Irishman by nation, on the eve of St. Vincent, the deacon and martyr, left this transitory life, which he hated; and happily began to live with the Lord, whom in his lifetime he had continually served. As to his body, it lies buried in the Church of Blessed Michael the Archangel. This abbey, during the time of his corporal stay in the world, he had piously governed. His obsequies were honourably and religiously performed; while in aftertime, he was regarded as a saint, and his memory was held in great popular veneration.

St. Malcallan's Abbey of St Michael is well known to have been in Thierasche or Tierarche, a province of Belgic Gaul, on the confines of Haynault. It was situated within the diocese of Laon, on the River Aisia, over the village of Hiersson. There this holy abbot's festival is duly celebrated on the 21st of January, which the Calendarists have allowed to be the date for his festival. Thus, Dorgain and Hugh Menard place it, in the Martyrology of their order. Truly might this venerable missionary exclaim with holy David, "Lord, Thou has proved me and known me; Thou hast known my sitting down and my rising up. Thou hast understood my thoughts afar off: my path and my line Thou hast searched out." That the Almighty approved his course of life upon earth has been manifested, in the fruits his labours procured, and in that hallowed memory bequeathed to the inhabitants of those places he had adorned and blessed before he was called away to Heaven.