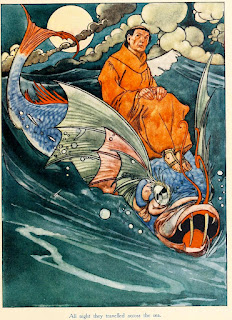 January 2 is the feast of an interesting saint who travelled between Ireland and Wales in pursuit of the monastic life, Scoithin of Tescoffin, County Kilkenny. The account of him below has been extracted from an inaugural address made by the then Bishop of Ossory, P. F. Moran at the first meeting of the Ossory Archaeological Society in 1874. In it the Bishop mentioned a number of local heroes, including Saint Scothin, and gave the text of a prayer which may have been associated with his Welsh journeying:

To take now an instance from our local parochial patrons, I may refer to the life of St. Scuithin, or Scothin, patron of Tescoffin, which possesses many peculiar charms. To the Rev. John O'Hanlon we are indebted for an interesting sketch of the district which was hallowed by the virtues and penitential exercises of this Saint, and I regret that his limits did not allow him to enter more fully into the particulars of his life. Like St. Canice, St. Scothin proceeded to Wales to perfect himself in religious learning, and at Menevia he had the great St. David for his master. About the year 540 he returned to Ireland, and chose for himself a lonely cell on the slopes of Slievemargie. Many disciples soon gathered around him, and that district became known in popular tradition as Tescothin, or Tescoffin, that is, "St. Scothin's cell." He enjoyed a close friendship with St. Finbarr of Cork, St. Brendan, St. Columbkille, St. Aidan of Ferns, St. Modomnoc of Tipraghny, and many other great saints who adorned our country at this period. St. Oengus marks his festival on the 2nd of January, and styles him "Scuithin, the diadem of Mairge." These words were translated by O'Curry for Dr. Mat. Kelly. In the complete MS. translation of St. Oengus's Festology, made by O'Curry for Dr. Todd, we read, "Scuithin, the ornament of Mairge," and in the notes, the metaphor being laid aside, it is explained as being equivalent to "Scuithin, the Doctor of Mairge."

In a translation kindly made for me by Mr. Crowe, the passage is given "Scuithin, the gem of Mairge." One of St. Scothin's austerities is specially mentioned. Each night he plunged into the stream that flows by Tescoffin, and remained immersed in it whilst he recited the penitential psalms. It is also recorded that, by a privilege only granted to the greatest saints, he was free from temptations, and being asked by St. Brendan how he was preserved from them, he replied that whenever he reposed, two heavenly virgins, i.e., divine hope and charity, kept watch by his side to guard him from the attacks of the evil one. He was so spiritualized by his continual penance, and so indifferent to all things in the world around him, that he is said to have walked on the sea as if it were dry land. On one occasion, meeting with St. Finbarr, as the legend tells us, between Ireland and Wales, he stretched his hand to the sea and plucked from it a scuitliin, i.e., a variegated flower, and threw it to Finbarr, saying, " See how, by the mercy of God, it is in a flowery meadow that we are journeying." Finbarr replied: " This is not a flowery meadow, but the sea ;" and dipping his hand in the water, he took from it a salmon which he threw to Scuithin, saying: "See how richly it is supplied by God to minister to our wants." The note in the Felire of St. Oengus adds, that it was on account of that variegated flower that our Saint received his name of Scuithin.

St. Scothin often proceeded to Wales to visit his venerable master St. David, and in the life of this great patron of Wales many facts are mentioned connected with our Saint. A short sentence which incidentally occurs in one of the texts of St. David's Life, published by Rees in his "Lives of the Cambro-British Saints," is of considerable importance as illustrating the life of St. Scothin. Having told how, on a certain Easter Day, our Saint visited Menevia, it adds that "St. Scuithin had also another name, i.e., Scolan," and on the spot where he conversed with St. David, an oratory was erected which in after times was called Bed-y-Scolan, i.e., "St. Scuithin's cell." This leads us to an interesting discovery. Three short poems, some of the most ancient Gaelic remains among the Cymri, bear the name of Scolan. This unknown name was hitherto a puzzle and a stumbling-block to antiquarians, and in the last generation the opinion was generally adopted that Scolan was merely a corruption of the name of St. Columba, and that it was to this Apostle of Scotland that these poems should be referred. The distinguished Celtic scholar, Skene, however, in his "Four Ancient Books of Wales," (Edinburgh, 1868), has clearly shown the fallacy of this opinion, and has proved that it is to St. Scothin that this name refers. The first poem dwells on some penitential exercises which should be performed for sins, and as examples of the most heinous crimes, it mentions the burning of a church, destroying the property of a school, and doing injury to a book. The second poem is a sort of Lorica, or invocation of God, for protection in his journey to Rome. The third lays down the maxims which lead to heaven, and is as follows :

"I asked the aged priests,
Their bishops and their judges,
What is the best thing for the soul?
The ' Our Father,' the consecrated host,
The blessed Creed: he who offers them for his soul
Until the judgment day: these are the best things.
Smooth the path that thou goest, and cultivate peace,
And to thee there shall be no end of mercy.
Give food to the hungry and clothe the naked,
And perform thy devotions;
Thus from the presence of demons wilt thou escape.
The proud and the idle shall have pain in their flesh,
The penalty for indulging in excess;
Let there be no sifting of what is not pure;
Excess of sleep, and drunkenness,
Too much mead, and too much submission to the flesh,
Are six bitter things for the judgment day.
For perjury in respect to land, and the betrayal of a lord,
And insult to the bounteous,
Let there be repentence before the judgment.
By rising to matins and nocturns,
By watching, and by the intercession of the saints,
Shall every Christian obtain forgiveness."

The Felire of St. Oengus tells us that St. Scothin was also honoured in another oratory, which is described as situated opposite the territory of Fir-n-Arda (i.e., Ferrard, in the county Louth), and it is added that this duirthach or oratory was on the sea shore, and that the waves of the sea dashed against its gable wall.