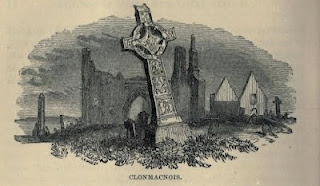 Today we commemorate a monastic saint of the 10th century, Dunchad O'Braoin, abbot of Clonmacnoise, who was also an anchorite and pilgrim. Canon O'Hanlon supplies the details of his life, which includes an account of two of his miracles:

The acts of this saint have been written by Colgan at the 16th of January. A short life, in the possession of MacCarthy Riabhach, and a still shorter one, in the Chronicle of Clonmacnois, furnished materials for its composition, and he has added some critical notes. Dunchad O'Braoin was a scion of an illustrious family of the Nialls, and he was born in the district called Breghmuine. This is now known as the barony of Brawny, in the county of Westmeath. He was a religious, who embraced the monastic state at Clonmacnois. His love for literature was aided through his zeal. There he made wonderful progress in piety and learning. His humility, too, was most exemplary, for he wished to shun entirely the attentions and applause of men. Secreting himself as much as possible, he lived the retired life of a holy anchorite. He is said to have shut himself up in a sort of prison. Tuathal, who had been both abbot and bishop of Clonmacnois, died A.D. 969. Dunchad was chosen as his successor in the abbacy. Having been brought from his retreat, this humble man was forced to accept the responsible charge, for which he had been selected.

Among the bishops at Clonmacnois, Harris has placed Dunchad on his list, but only conjecturally, at A.D. 969. Yet, there is no foundation whatsoever,for such an arrangement. Certain words, quoted from Colgan, prove nothing more than that Dunchad had been placed over the monastery as abbot. Throughout his acts, or wherever else he is spoken of, Dunchad is never called bishop. Governing the monastery for some time merely as abbot, he desired a more retired state of life. He withdrew from the management of monastic affairs after some time. By many persons he was much admired in that part of Ireland. The titles of abbot and of anchoret are invariably applied to him. This saint is called a holy and devout anchorite, and he is regarded as a pilgrim. Such designations are applied to him in the Annals of Clonmacnoise, at A.D. 981.

Through his prayers, Almighty God restored to life the infant son of a woman. This mother left her dead child at the entrance of our saint's cell. She then retired so as not to be seen, but she hoped that the saint would pray, and procure the infant's resuscitation. With this request he complied. This miracle is alluded to by Tighernach, author of the Annals of Clonmacnois. This writer lived in the eleventh century. Tighernach says, that Dunchad was the last of the Irish saints, through whose intercession God had restored a dead person to life.

Another miracle was wrought in favour of this holy man. For one festival day of St. Andrew, the Apostle, when Dunchad had been exhausted from the effects of severe fasting, he began to desire some nourishing diet. He prayed to God for such relief; and then a youth, who served him, went out into a field to collect straw. There two most beautiful men appeared to him, and after a salutation said, "Thy master Dunchad, the servant of God, hath asked the Lord we serve for food and drink, and behold both are here for you to bring him." Then taking the straw from this youth, they placed nourishing meats, and a vessel, containing mead or beer, mixed with honey, on his shoulders. This load he carefully brought to Dunchad, and related what had occurred. The blessed man gave special thanks to God, who had commiseration on his weakness, and who had relieved him by so evident a miracle.

In the year 974 or 975, he withdrew to Armagh, where sequestered and unnoticed he hoped to spend his days. His reputation however soon spread throughout that city. So much respect was paid to him there, he was determined to leave it, that he might avoid further notoriety. His intentions being discovered, the principal inhabitants of Armagh deputed some venerable persons of the clergy to request that he should stay with them one year longer. The clergy alone were able to change his resolves.

He complied with their petition, and continued to reside at Armagh. At the year's end he again prepared for departure. But a similar request was made. This repetition was annually continued, it is stated, and so he was induced to prolong his stay in that city. St. Dunchad O'Braoin there ended his days, and he died on the 16th of January—corresponding with the 17th of the Calends of February—A.D. 987. The year 988 is said, however, to be more correct. That most distinguished historian of Ireland, Eochaidh O'Flannagain, has allusion to this holy man in an Irish stanza, thus rendered into English by Dr. O'Donovan :—

" The seat of Macha [i.e. Queen Macha] the treacherous, voluptuous, haughty,
Is a psalm-singing house possessed by saints ;
There came not within the walls of her fort
A being like unto Dunchadh O'Braein."'

We are told, furthermore, that at the end of his thirteenth year of pilgrimage to Armagh, he passed out of this life. The amiable as well as the humble character of this holy man may be estimated from the disposition he evinced, to yield his opinions to the wiser judgments of virtuous persons, in the order of his living, lest he might seem to be overwise in his own conceits.