A Feast of Saint Christopher on the Irish Calendars 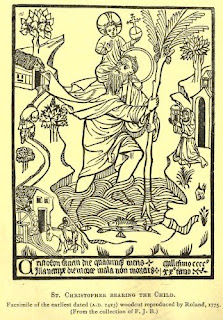 On April 28, the early Irish calendars commemorate a feast of Saint Christopher, the Martyr. His main feast is celebrated on July 25, although in the East he is commemorated on May 9. Canon O'Hanlon cites a medieval document which suggests that the April 28 date marks a feast of the translation of the martyr's relics and helpfully notes the other early calendars which also record it. In the account below, taken from Volume IV of the Lives of the Irish Saints, I have inserted the verse in honour of St Christopher from the Martyrology of Aengus, quoted in the footnotes into the main text. The illustration of Saint Christopher on the left also has an Irish connection, it is taken from the personal collection of the nineteenth-century Belfast antiquarian, F. J. Bigger:

In the Leabhar Breac copy of St. Aengus' Felire, a festival of St. Christopher is commemorated, at the 28th of April. In a scholion affixed to this account, he is set down as a martyr, who suffered under Decius, with no less than 10,403 martyrs. An Irish poem is quoted, containing the following eulogy, translated by Dr. Whitley Stokes:

He was a cleric with purity:
he was a pious Christian:
before the call without reproach over sea
his proper name was Christopher.

In the genuine Martyrology of Bede, as also in the Martyrologies of St. Raban Maur, and in the Manuscripts at Monte Cassino, at St. Maximin's and at St. Martin's church of Treves, and in Ado's Manuscript copy belonging to the Queen of Sweden, this feast has been recorded. However, in a certain document of the Carthusians, at Bruxelles, it is set down as the Translation of St. Christopher's relics. The Natal day of this holy Martyr is thought to be the 25th of July. There is a beautiful allusion to this holy martyr, who is thought to have carried Christ on his shoulders, over a sea; although the allegorical meaning seems to be, that he carried our Redeemer in his breast, while wading through a sea of temporal tribulation.