The Sons of Terchur, April 13

On April 13 the earliest of the Irish calendars, the Martyrology of Tallaght, commemorates a group of saints associated with the lakeland area of County Fermanagh, the Sons of Terchur. There are quite a few saints grouped under their patronymic to be found in the Irish calendars. In some cases we have names preserved for the individuals but in many others they are simply known collectively. The memory of the sons of Terchur is carried forward into the 17th-century Martyrology of Donegal, but without any further detail. Canon O'Hanlon fills up some of the space in his article by a romantic description of the scenery of the saints' locality, accompanied by an engraving, and by way of contrast to their holy way of life selects a later medieval episode from the Irish Annals:

On the 13th of April, we find entered, in the Martyrology of Tallagh Mac Tarchair, Locha mic Nina. This place was identical with Lough-Mac-Nen, now Lough Macnean, situated between the counties of Fermanagh, Cavan and Leitrim. The very romantic scenery, about the margin of Lough Mac Nean, is enhanced greatly by that beautiful sheet of water, extending between the counties of Fermanagh and of Leitrim, while several islands seem to float over its surface. On one of these, called Innisshee, there is a crannog, and it lies to the left of the Hanging Rock, a magnificent cliff over the Lake, and which is shown in the engraving. The Island itself is in the centre of the Lough, and the view as presented in our illustration is that appearing from Belcoo. A bridge at this village carries the road across to the northern extremity, which is situated in the county of Cavan. 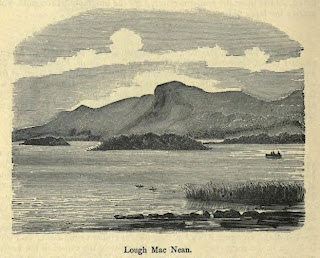 The sons of Terchur, are mentioned, in the Martyrology of Donegal, as having had veneration paid to them, on this day. They are also said to have been of Loch-mac-Nein; but, whether their place of retirement was on an Island, situated in the lake itself, or whether it was to be found on the shores which border it, we have now apparently no clue left us, which could serve to discover that particular site.


In the year 1499, the Annals of the Four Masters' state, that Con Carragh and John O'Roorke took Melaghlin Mac Rannall, a prisoner, and they conveyed him to Inis-Ochta, an Island on Lough Mac Nen. But Rory Maguire rescued the prisoner, and slew these two sons of O'Roorke. It seems hurtful to generous and refined feeling, that deeds of violence should be associated with so charming a locality; and, even more so, when it is known, that holy men had once sanctified those places which are historic, by their living presence, although we can only learn of them and their associations with the scene, through the patronymic above recorded.