April 30 is the commemoration of a tenth-century Irish monastic who became abbot of the monastery of Waulsort in Belgium, Saint Forannan. His hagiography records that he left Ireland accompanied by twelve followers, but in his own country he has tended to be confused with two other saints of the same name, one a ninth-century abbot of Armagh and another a bishop of Donaghmore, who is believed to have flourished some centuries earlier. Canon O'Hanlon assembles a huge amount of information in his article on the saint, some of which relates to Forannan of Donaghmore rather than to the Belgian missionary. I have therefore taken a summary of both the life of Forannan and of the monastery he headed from a paper on Irish Saints in Belgium. I found it particularly touching that the name of Forannan was preserved through the centuries as a name for members and leaders of this monastic community, sadly it fell victim to the impiety of the French Revolution, as author T.A. Walsh explains. He too begins by identifying Forannan as the Bishop of Donaghmore, but is concerned only with the Belgian career of the saint, to which he provides a useful introduction: 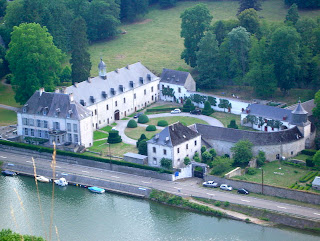 After his consecration at Semagh as Bishop of Mor-Donnach St. Forannan passed over to Belgium with twelve companions and joined the monastic community at Waulsort. Owing to the reputation he enjoyed for sanctity and learning he was, in 967, chosen Abbot, the fifth to hold that office since the foundation of the Abbey twenty-three years previously, the immediate successor of St. Macalan being, as we have seen, St. Cadroe; and such was the success in every respect of Forannan's administration that he came to be regarded as the real founder of the Abbey. In the chronicles of the period he is so referred to. It was during St. Forannan's rule that the monastery of Hastiere, farther up the Meuse, near Givet, was placed under the jurisdiction of Waulsort. In 976 the Abbot Forannan and Count Eilbert, the munificent benefactor of Waulsort and Hastiere, proceeded to Rome and obtained the approbation of Pope Benedict VII for the two foundations.

St. Forannan was held in particular affection by Count Eilbert and his pious Countess, Heresinde, both of whom had given a cordial welcome to the Irish monks on their arrival in their territories. He was presented by the Count at the Court of Otho the Great, into whose hands Eilbert surrendered all his rights over the Abbey; the King accorded to Forannan the investiture of the monastery and took him under his special protection. It was at the request of the holy Abbot that Count Eilbert procured the translation of the relics of the Irish missionary St. Eloque from Grigny-sur-Oise to the Abbey of Waulsort, where they were received with great popular veneration.

Under the name of Lotharingie the Low Countries were subject in the tenth century to the King of Germany, and at the time of the foundation of Waulsort (944) the reigning sovereign was Otho I. The Irish immigrant monks found in this prince a patron and protector. By a charter dated the 10th of September, 946, King Otho approved of the foundation of the monastery and ratified the grants made by Count Eilbert for its support. He further ordained, by the same instrument, that the new abbey should always remain the appanage of Irish monks, for whom it had in fact been originally erected, that a religious of their nationality should be its abbot as long as the community numbered Irishmen among its members; finally, that the abbey should be especially affected to foreigners and travellers, conformably with the intentions of its founders. This is expressed in the name which the abbey received - Monasterium peregrinorum. During several years King Otho's prescriptions seem to have been observed; but when the supply of Irish monks ceased it was of course found impossible any longer to adhere to them; hence subsequent to the death of St. Forannan all, or nearly all, the religious were natives of the country, and the office of abbot necessarily came to be held by other than Irishmen. In such records as survive relating to Waulsort we find no mention of any Irish connexion with the Abbey from the commencement of the eleventh century until its suppression at the close of the eighteenth.

The inestimable services which the Abbey of Waulsort rendered to religion and country during the eight hundred and fifty years it existed, may be fitly described in the words of the following passage from M. Godefroid Kurth, in which the distinguished Belgian historian admirably summarizes the manifold activities of the monastic institutions of the period:

During the French Revolution Waulsort experienced the fate of many another Catholic institution. In 1793 the Abbey was pillaged and the church destroyed by the champions of Liberty, Equality, and Fraternity; three years afterwards, in 1796, the ruin was complete; the monastery was suppressed, its property confiscated, and its religious dispersed. It is noteworthy that among the fifteen members then constituting the community was one bearing the name of Forannan. And in a published list of the monks assisting at the eight chapters held for the election of Abbot between the years 1629 and 1756, when the last Abbot was chosen, the names of Forannan, Eloque and Nonce recur on each occasion. It would thus seem as if the memory of the holy Irish Abbot and of the other Irish saints whose relics had been preserved in the monastery had been affectionately cherished throughout the whole period of the Abbey's existence.

The British Museum is in possession of a most interesting and valuable relic of the Abbey of Waulsort. Count Eilbert, its founder, presented to the monastery an exquisite intaglio, in rock crystal, representing the history of the Chaste Susanna, a chef-d'eeuvre which, as the inscription testifies, was executed for Lothaire, King of the Franks, probably Lothaire I. This precious work of art was jealously preserved by the monks of Waulsort for upward of eight hundred years, but disappeared on the suppression of the Abbey. It subsequently came into the hands of a Lyonese amateur, from whom it was purchased in 1857 by the authorities of the Museum.