March 28 is the feastday of Saint Conall, linked to both County Meath and to the Aran islands where his memory is preserved with that of three other Irish saints - Fursa, Brendan of Birr and Berchan. Canon O'Hanlon has the details, although I am left wondering what lies behind the linking of these particular saints. In his footnotes, O'Hanlon admits that he cannot identify the saint Berchan and is unsure that Conall of Aran is our Saint Conall of Kilskyre. Brendan and Fursey are well-known saints who flourished much earlier than the ninth-century Conall, so I am left wondering how and why they came to be linked with him and the obscure Berchan on Aranmore. I suspect that there has been some confusion and will thus need to do some further research into the 'four beautiful saints'.

The servant of Christ, Conall, or Conald, is said to have been son to Fiachna, Prince of East Meath, and of the blood royal of Ireland. The latter was son to Maelduin, son of Column, son to Aedh, son of Libren, son to Dallen, son of Endeus, son to Loegaire, son of Niall of the Nine Hostages. Colgan has entered some notices, in which an effort is made to investigate matters, serving to illustrate this saint's biography. The Bollandists barely notice him, with doubts of his claim to a legitimate cultus. We are told, that Conall was at first Bishop of Kilskyre, or Kilskeer. This old church is now a ruin, measuring eighty-two feet, by twenty-seven feet, three inches. The body is completely desolated, for the windows, doorway, and east wall, have disappeared. The western end terminated, in a triple belfry. Within the chancel, there is a sepulchral cross, which originally marked the grave of an ecclesiastic. Kilskyre was plundered and burned, on more than one occasion; and, after the English Invasion, a parish church merely remained. It is now a parish, in the barony of Upper Kells, and county of Meath. Conall was the only bishop we meet with in that place. Thence, it would seem, he went to the Great Island of Aran. Here, he is said to have taken up his residence, at a place now known as Teampul an cheathruir aluinn, Anglicised, "the church of the four beauties," or of "the four beautiful saints." Only a few fragments of the walls now remain. It is related, that there St. Furseus spent several years, in solitude and prayer, before he set out on the mission of founding his establishment at Perrone. His memory has not departed from the minds of the Araners; for, the people of those islands greatly venerate this extraordinary saint. They still relate many cures effected, through intercession of the same holy man. 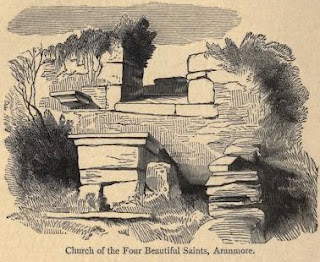 St. Brendan of Birr was another of those popular heroes, as also St. Berchan, with the present St. Conall, according to the author already quoted. During the reign of Aidus Finliath, who obtained such advantages over the Danes, St. Conall died, A.D. 865, or 866, and on the 28th day of March. The "Chronicon Scotorum," however, has his demise at A.D. 867. His record is found, in the Martyrology of Tallagh, at the 28th of March. Marianus O'Gorman and Maguire commemorate him, in like manner, and style him a bishop. On this day, in the Martyrology of Donegal, we find mentioned the name of Conall, Bishop, as having veneration paid him. St. Fursey, with Brendan of Birr, Berchan, and the present Conall, as we are told, were buried in the cemetery of the same church, and their bodies were deposited in the same tomb. It seems possible, that after our saint's time—the number being completed—that old church got its distinguishing appellation, of belonging to "the four beautiful saints," and this name it still bears. According to Colgan, the Translation, or some Festival, of this saint was kept, at Trim, on the 17th of February, when many holy persons are commemorated, on that day, and at the same place. He thinks, several of these were related to the present St. Conall; but, the matter is altogether doubtful, so far as he is concerned.