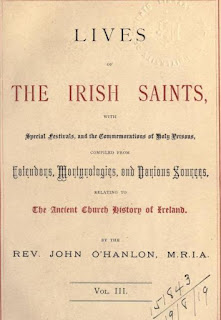 We close the month of March with the commemoration of Saint Mella, an abbess who embraced the religious life in later years, having borne two sons who themselves were saints. Canon O'Hanlon provides the details:

Some account of this holy woman is given by Colgan and by the Bollandists. St. Mella flourished, about the middle of the eighth century, in the northern parts of the Connaught province. This, has been inferred, from the circumstance of her son St. Tighernach's death, having been recorded, at A.D. 805. The devout matron, by God's holy decree, was the happy mother of two sons, whose names are found on record, in the pages of our Irish Martyrologies. These are named respectively, St. Cannech, a Priest, and St. Tigernach, an Abbot. Having been deprived of her husband, by death, she afterwards formed the resolution of embracing a religious life. St. Tigernach erected a religious house, near Lough Melve, —now known as Lough Melvin,—in the county of Leitrim, and within the diocese of Killmore. He left this establishment, in favour of his mother; and, he then retired to another monastery, named Kill-Acaidh, or "the church of the field," the situation of which is unknown. St. Mella presided over a community of holy women, at the former place which, from her, took the name of Doire-Melle, which signifies, the "oak grove of Mella." We are told, it had been situated in Rossinver parish, county of Leitrim, although the name is not known, at present. It is said, she ruled over her nunnery for many years; but, little more has transpired respecting her. She is supposed to have died, before the year 787, as her name occurs, in the Martyrology of Tallagh. In it we find inserted, Mella, at the 9th, and Doire Mella, added, at the 31st of March, to the same etymon. In the Martyrologies of Marianus O'Gorman, and of Cathald Maguire, there is a Mella, belonging to the church of Cluainai, set-down, for the 19th of March. But, she may have been a distinct person. The Martyrology of Donegal gives her this title of Doire Mella, on the 31st of January, when alluding to her son Cainneach; but, at the present day, it has no record of her feast. By her influence and authority, St. Mella awakened in the souls of her religious, as of her own two sons, the love and fear of God. This she effected, likewise, in the spirit of gentleness, forbearance, and true charity.