On March 3 the Irish calendars commemorate a saintly bishop who rejoices in the name of Cele Christ. Although a descendant of the northern line of Niall of the Nine Hostages, he flourished in Leinster in the eighth century. The Martyrology of Donegal entry reads:

CELE-CHRIST, Bishop, of Cill-Cele-Christ in Ui-Dunchadha in Fotharta in Leinster. He was of the race of Eoghan, son of Niall.

Canon O'Hanlon summarizes what is known of him:

This devoted servant of Christ, in after time, deserved well the name he seems to have obtained in baptism, of Cele-Chriost, Latinized, Christicola, i.e."worshipper of Christ." He descended from an illustrious family... Judging by the date assigned for his death, this holy man must have been born about, or after, the middle of the seventh century. His birth probably took place, in the northern part of Ireland, inferring from his family pedigree. But, he resolved on leaving Ulster, and betook himself to a place called Hi-Donchadha, in the western part of Leinster. It is also said to have been in Fotharta. Here he erected a cell, which is called Cella-oc. It may be asked—and the situation warrants such suspicion—could this have been the place, which subsequently had been converted into the denomination of Templeoge, where [the] present form of the name would lead one to believe, that it means " little temple" or " church." Probably at some former period, it obtained the appellation Kill-Cele-Chriost, or "the cell of the worshipper of Christ," in honour of the founder's name. 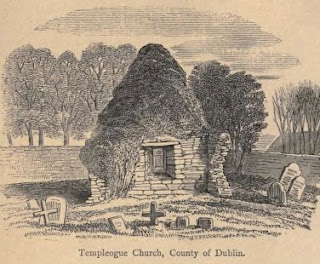 Besides this church, as noted, the district of Ui-Dunchadha contained the church denominations of Cill-mochritoc, on the banks of the Dodder, i.e. Achadh-Finnigh—already identified with Finnmagh—and Cill-na-managh, in the parish of Tallagh. Here Cele-Chriost desired to spend his days in retirement, and solely engaged, in Divine contemplation. Yet, although declining ecclesiastical rank, it was urged on him as a duty, when he accepted the office of bishop. It is stated, that he felt a great desire to make a pilgrimage to Rome, and that taking a band of companions with him, Cele-Chriost set out for this purpose. On the way, however, they were proffered hospitality, by an evil-minded man, who really intended their murder, to obtain money he supposed them to possess. The pretended host fastened his door, on the outside, when the strangers entered his house. These, suspecting an evil design, took counsel among themselves, as to what should be done, when Cele-Chriost addressed them as follows :"This seems to me the best course for you to adopt ; allow me to take charge of your effects, and to collect them into one wallet, so that when he comes to take your lives, and when he opens the door of your enclosure, let each one of you rush out who can escape with life." His companions cried out: "Caoin-erain." This is rendered, in Latin:"Bonum concilium invenisti." It is more than probable, the Irish designation, in the text, should read, cain airle which means "good counsel." This was agreed upon, and the consequence was, all safely obtained their freedom. Afterwards, we are told, our saint bore the name Cele-Christus, Coin-erael. Little more is known regarding him, save that he returned to Ireland, and died A.D. 731 or 732, having been buried, in his church, at Cill-oc. The Annals of Ulster defer his demise to the year 726. Colgan and the Bollandists have some notices regarding him, at this day. His church was situated, in the district of Ui Dunchadha, that, through which the River Dodder, near Dublin, flowed. The Mac Gillamocholmogs ruled over it, and their lands extended southwards to Glen Umerim or Glanunder, now Ballyman, on the confines of Dublin and Wicklow counties. There seems to be great difficulty in identifying the exact site of this ancient church.

The Feilire of St, Oengus, in the "Leabhar Breac," has his commemoration, at the 3rd of March; while, the Martyrology of Tallagh, likewise, enters the name of Celicriist. Marianus O'Gorman has even a more detailed statement. The Martyrology of Donegal, at the same date, has Cele Christ, Bishop of Cill-Cele-Christ in Ui Dunchadha, in Fotharta, in Leinster, with the statement, that he sprung from the race of Eoghan, son to Niall. In the Kalendar of Drummond his feast is this day noted. It is supposed possible, that the name of Christ Church, Dublin, may have been derived from this Cele Chriost, a saint of high reputation.