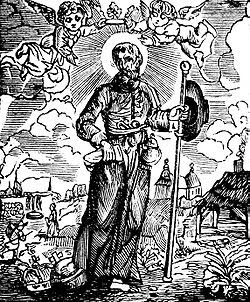 On March 10 we commemorate an Irish saint who is patron of Vissenaken in Brabant and who flourished in the eighth or ninth century. Canon O'Hanlon takes up his story:

Among the many holy Irishmen, who made their way to foreign countries in past ages, Hymelin or Himelinus was distinguished, and we have his Acts recorded, at the 10th of March, in Colgan. These are taken from an account of Father Heribert Rosweyde, and from a Life, founded on notices in the Martyrologies, and from popular traditions, by John Gillemann, and written about 1480. The Belgian writers, Jean Ver Meulen, or John Molanus, and Autbertus Miraeus, have recorded St. Himelin. The Bollandists have inserted his Acts, at the same date, as found in Gilleman's work; Saussay, Willot, and Ferrarius, note him in their Calendars.

It is related, that not only was Hymaelin a Scot, or an Irishman, but that he was also related to the celebrated St Rumold, the Apostle of Belgium. In like manner was he assimilated by virtues and merits. He appears to have been desirous of following Rumold, to the country of his adoption. Little regarding his early life is known. We are told, however, that he undertook a pilgrimage to Rome, to visit the shrines of the holy Apostles, Peter and Paul. He returned, afterwards, through the province of Brabant, at a time, too, when Pepin ruled over France. Being greatly fatigued and very thirsty, he stopped on the way near Vissenacken. Here he was seized with a violent fever. He sank exhausted on a bank, and he seemed pale and worn to extremity, when a girl passed by, while bearing water in a pitcher from a neighbouring fountain. This she brought as a household supply for her master, who is called Deculus, a Priest, and who was curate of that place. As a plague was then raging, she had received strict orders from her master, to let no person touch the pitcher, for he feared infection. Hymelin asked for a drink of the water, as she passed, but the girl refused to give it, excusing herself, owing to the strict orders she received. Again, the sick traveller languidly repeated his request, when the girl answered, "My friend, I cannot at all give you water from the pitcher, because of the injunction I received from my master ; yet, I beseech you to visit our house, and there you shall be refreshed, not only with drink, which you need sorely, but with abundance of food." This invitation Hymelin refused, but he said confidentially to the woman, "Daughter, have trust, and give what I ask for; the Almighty shall be satisfied with your action." She was moved to compassion, and he drank from the vessel. Then was the pilgrim able to continue his journey. The servant brought the water he had tasted to her master's house. Some of it was presented, for his use ; but, on drinking, he found it had the taste of wine. Enquiring from the girl, she confessed what had occurred, and owned her disobedience to the curate's orders. The priest was not displeased, however, but he instantly ran after the unknown holy pilgrim. The latter was overtaken, and conducted to the curate's home, where he received a hospitable welcome and refreshment. Yet, Hymelin refused the luxury of a comfortable bed, or any other comforts; but, he expressed a wish, to lie down on some straw in a barn. There he rested for three days. His hour for departing this world had now come; and, requesting the favour from the curate's hands, he received the last Sacraments of the Church. Lying all alone, his happy spirit passed away to the guardianship of his Creator. No sooner had he departed, than all the bells around began to toll of their own accord, and without a hand touching them. This was a subject of great astonishment for the people. The curate was the first to divine the cause, and he invited his parishioners to enter the barn, where Hymelin's corpse lay. There they saw his face and body, surrounded with a radiant light. Deeming him to be a true saint, they began to consider where his remains should be deposited.

Going into the village church, they found a tomb, corresponding with the size of the pilgrim's body, and miraculously prepared for its reception. Citing the authority of John Molanus, we are told by Dempster, that neither by the Roman Pontiff, nor by the bishop of the place, had Himelin been enrolled among the saints ; and, yet, his miracles made him celebrated, and his dedicated temples were frequented, by the people. In Convaeus' list of Irish Saints, for the 10th of March, he notices St. Himilius, a nobleman. The name is written Himelinus, in the anonymous list, at the same day. In Henry Fitzsimons' list—apparently through mistake—and on the authority of Molanus, his feast is set down, at the 20th of March. The Manuscript Florarius, Canisius, and Molanus, in his edition of Usuard, have his feast, at the 10th. In Adam King's Kalendar, at the same day in March, we have entered S. Hemelin, confess, scotisma vnder king dungallus. In like manner, Dempster's and Camerarius record Himelin, he having been revered as Confessor, in Vissenaken. Thither were the sacred remains brought and honourably interred, in a crypt, under the campanile. In after time, several miracles were wrought, through the merits of Hymelin, who is regarded as the patron saint of Vissenaeken. On the 10th of March—probably the date for his death—a great concourse of the parishioners and of pilgrims is annually attracted to his tomb. On the altar his image was visible.