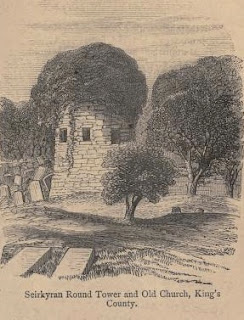 March 5 is the feast day of a saint whom later tradition claimed was the earliest in Ireland, pre-dating the arrival of Saint Patrick. This challenge to the primacy of our national apostle caused some discomfort to the nineteenth-century writers on the Irish saints, but in his account of Saint Ciarán of Saighir below, Father Albert Barry sidesteps the issue completely. Instead, he concentrates on the other aspects of the hagiographical record- the saint's asceticism, his miracles, his role as one of the 'Twelve Apostles of Ireland'  and his holy death:

SAINT CIARAN was born at Fintract Clearagh (Cape Clear) in the year 446. “He was the firstborn of the heaven-loving Saints of Erin”. His father was Luaigne, and his mother was Liadhan of Corca-Laighde (Carbery). Angels watched over her at his birth. He grew in holiness as in years, and won the love of all.

Whilst he was seated one day near the seashore, he saw a hawk swoop down on a little bird sitting in its nest in a hole of a rock, and bear it aloft in its claws. Ciaran was very sad on account of what had befallen the bird, and prayed to God for its safety. The hawk suddenly flew back, and laid the little bird fluttering and panting at his feet. He took it gently in his hand and put it again in its nest.

When he had grown up to manhood he set out for Rome, “for” as an ancient writer says, “it had been made known to him that he should there get holy learning and become a Bishop." He spent many years at Rome, leading a very holy life and then went back to his birth-place. He preached to his clansmen and built a church on the island of Clearagh.

He went soon afterwards, at the bidding of Saint Patrick, to Saighir (King's Co.), and made his home in a lonely wood on the bank of a small stream. He built a hut of wattles interwoven with twigs and smeared with mud, and thatched it with leaves and grass. He dwelt among wolves and deer. His food was a little barley bread and herbs eaten only at sunset, and his drink was water from the well. He slept on the ground.

Disciples flocked about him and strove to live a holy life like him. The wood, hitherto filled with the howling of wild beasts, was now filled with the sacred songs of men like angels. They wore coarse sackcloth, slept on the ground, watched, prayed, and fasted. They at one time listened to the wise words that flowed from the heart of their holy teacher: they then went forth to the fields and worked from love of Jesus Christ who once had worked at Nazareth; they again sang hymns of praise to God in their little wooden Oratory, They were poor in earthly goods, but rich in heavenly goods, and every day laid up for themselves treasures in heaven. Ciaran wrote a Rule for them, and led them on the way of perfection both by word and example.

Ciaran often saw angels hovering over the monastery. He also worked many miracles. Saint Patrick came one day followed by some chieftains. There was a dearth of food, but the little that was there wonderfully increased through the prayer of Ciaran and the goodness of God.

Ciaran went to the monastery of Saint Iltud, at Bangor in Wealhas (Wales) in the year 500. 'The monastery was built in an open fertile plain; there was a wood thickly planted with trees, where many wild beasts lived and a very lovely stream flowed through it.’ He then went to a small island in the river Wye, and built a monastery there. Saint Samson came with other holy men to dwell with him in that hallowed spot, and was welcomed by him as an angel from heaven. Ciaran left it under his care, and then went back to Saighir.

Whilst he was at Saighir a war broke out between the Monarch of Ireland and the King of Caiseal, and the two armies met near Saighir. There was near to it only a little stream between them. Ciaran went to the leaders in turn and besought them not to fight, but his efforts were unavailing; they would not listen to him. He then betook himself to prayer, and God heard his prayer, and the Prince of peace hindered these bloodthirsty men from slaughtering each other. The little stream suddenly became so swollen, that they could not fight. The Monarch of Ireland withdrew on seeing the miracle, and the Leader of the army of Mumha (Munster) came to Saighir, and the holy Abbot welcomed him and made a great feast for him and for his soldiers.

Some harpers of the King of Caiseal were slain whilst on their way through Muscraidhe-Tire (Co. Tipperary). The King, unaware of what had befallen them, but uneasy on account of their long absence, instead of consulting soothsayers, sent word to Ciaran, and begged him to let him know what had befallen his harpers. Ciaran sent word back saying, “Your harpers have been slain, and their bodies have been thrown into a lake in Muscraidhe-Tire.” The King went at once to the place, and saw the harps hanging on the trees hard-by. He then searched for the bodies, and at length found them through the prayers of Ciaran. The lake has ever since been called "the lake of the harpers.”

He brought a woman to life by his prayers. Eathyll, a woman living at Leim (Ballybritt), fell one day from a height, and died soon afterwards. Ciaran prayed to God to bring her back to life, and his earnest prayer was heard. She came back to life through the goodness of God, and the wonderful faith of the holy Bishop.

Ciaran wished to become a disciple of Saint Finnian, although he was now old, and had Saint Odhran, Saint Carthaig, and other holy men as his disciples at Saighir. He had so great a thirst for the knowledge of the holy Books that when he heard of the great learning of Saint Finnian, he set off to his monastery at Cluain-Iraird and sat at his feet as if he were only a young disciple. He remained there for many months and then went back to his own monastery. His holiness shone out more brightly as he grew old. His last days at length drew nigh, and his holy friend Saint Finnian hastened to Saighir to be with him, and to speak to him for the last time.

Many Bishops, and his own Monks stood silently around him. He said to them,  “My brethren, pray with me to God that I may not stand alone before His judgment seat, but that His holy Saints and Angels may be there with me: pray that my path to the King may not be through darkness, but that His smile may welcome me.” He then gave his blessing to the Monks, and said to them, “My children, the Lord now calls Me and I fear for you: I entrust you to God and to Carthaig: uphold piety: love your monastery: beware of the son of perdition, that your days of blessedness may not be shortened, A time shall come when wickedness shall prevail: churches shall be pulled down, and monasteries be made into deserts: truth changed into falsehood, and holy Baptism be corrupted. Every one then will seek not his own, but what does not belong to him.” He then went with them to the monastic church and offered up the great Sacrifice. He got the holy Anointing, and then begged the brethren to bury him in a hidden spot known only to themselves.

Ciaran, having won a victory of abstinence and penance, and overcome the devil and the world, breathed his last breath, and angels came to meet his soul and lead it to God. He died at midnight, March 5th, in the year 540. His body was wrapped in linen, and hymns and psalms were sung over him for seven days.

"His heart was chaste and bright:
his soul was white and spotless
like the foam of the sea,
or the whiteness of a swan in the sunshine.”

The large pillar-stone on which Ciaran had carved a cross still stands on the shore of a small inlet of the sea at Clearagh. A spring of fresh water now called Saint Ciaran's well, gushes forth near it and mingles with the tide.