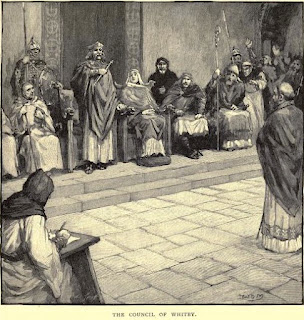 March 13 is the commemoration of Saint Gerald of Mayo, a Saxon saint who travelled to Ireland with Saint Colman of Lindisfarne following the Synod of Whitby. Saint Colman established a monastery on the west coast, only to find that there was tension between the English and the Irish monks and eventually the English got their own foundation at what is still known as 'Mayo of the Saxons'. Our saint was the first abbot of this monastery and below is an excerpt from a paper on the Diocese and Abbey of Mayo which describes Saint Gerald and his times. I have ended the account with the 13th-century suppression of the diocese and its incorporation into the see of Tuam, but if you are interested in the later history of Mayo the paper can be read in full online.

THE DIOCESE AND ABBEY OF MAYO

ONE happy result of the Synod of Whitby, in 664, was the foundation of the Abbey of Mayo, in Ireland, by St. Colman. Most readers are familiar with St. Bede's account of the famous convention at Whitby, in the North of England, under the presidency of King Oswy, when the Roman method of keeping Easter was adopted. St. Wilfrid's arguments were peculiar. Indeed the late Rev. Dr. MacCarthy, the distinguished editor of the Annals of Ulster, says that 'Wilfrid's farrago of fictitious tradition and fabricated testimony can hardly fail to excite a smile.' Yet, for the sake of peace though the matter was purely disciplinary St. Colman bowed to the decision of King Oswy and resigned his see of Lindisfarne, retiring to Iona with such of his Irish and English disciples as chose to follow the Irish usages. Between the years 665 and 667 St. Colman founded several churches in Scotland, but, at length, set sail for Ireland, accompanied by thirty faithful followers, settling in the island of Inisbofin, off the coast of Mayo. This was in the year 668, according to the accurate chronology of the Annals of Tighernach.

The island of Inisbofin, i.e., the island of the White Cow (from a pagan legend of a white cow), is a little over five miles west of Renvyle Point, in Connemara, and contains 2,300 acres. Here, in 668, St. Colman and his community of Irish and English monks built a monastery, the chief ornament of which was the reliquary of St. Aiden of Lindisfarne. However, as St. Bede tells us, after a couple of years there was dissension between the Irish and the English monks, and so St. Colman travelled about, and at length fixed upon, Mayo (Magh-eo=the Yew Plain) where he placed the English brethren. Thus arose 'Mayo of the Saxons.'

St. Colman spent the remainder of his days in Inisbofin with his Irish monks, but he continued to rule both monasteries till his death in 675, or, as some say, 676. All are agreed that his festival is observed on the 8th of August. To this day the ruins of his little oratory are to be seen in the townland of Knock, in Inisbofin.

We are safe in dating the foundation of 'Mayo of the Saxons' as of the year 670, and St. Colman appointed St. Gerald an English monk as first abbot. Though a comparatively young man he proved a wise ruler, and governed his monastery till 697, when he resigned in favour of St. Adamnan (Eunan of Raphoe), who had come over from Iona. St. Adamnan celebrated the Roman Easter at Mayo in 703, and then went to Skreen, in Hy Fiachrach. After his departure the monks prevailed on St. Gerald to resume the care of the abbey, and the worthy Saxon saint continued to guide the destinies of Mayo for over a quarter of a century. The Annals of Ulster chronicle his death in 731, and his feast is commemorated on March 13.

Mayo under St. Gerald became an episcopal see and the monastery was naturally selected as the Sedes episcopalis. St. Bede, writing in 730, says:

That monastery is to this day colonized by English monks and, growing up from a small beginning to be very large, is generally called Mayo (Magh Eo). As matters have long since been reformed, it contains an exemplary body of monks, who are gathered there from England, and live by the labour of their hands, after the example of the venerable Fathers, under a rule and canonical Abbot, leading chaste and single lives.

Usher, quoting from the Book of Ballymote, says that, at the opening of the eighth century, there were one hundred Saxon monks at Mayo. The Litany of Aengus the Culdee invokes the fifty saints of Leyny who found their place of resurrection at Mayo, whilst Cuana of Mayo is named in the Martyrology on the 27th of March.

Under date of 773 the Annals of Ulster chronicle the death of Aedhan, Bishop of Mayo. Ten years later, viz., on Saturday, August 2, 783, Mayo was burned by lightning. Towards the middle of the ninth century Turgesius burned the church of Mayo, and, apparently, the monastery suffered much during the Danish invasion. Again, in 905, Temple Gerald (the church of St. Gerald) was burned. From these entries Dr. Petrie concluded that the monastic buildings were of wood, and so proved an easy prey to fire.

In 1110 we meet with the following entry, which goes to prove that a stone church (damhliag) was then built: The Saxons of Mayo granted the tithes of their city to God and St. Michael, and they made a damhliag in it for the pilgrims of God for ever. And the family of Maelfinneoin proceeded to destroy it, and that damhliag fell on the people and killed men and cattle. After this came the senior, that is, Cathasach, and he renewed that temple in the reign of Ruaidhri and his son Toirdelbhach, and it was confirmed from that out for pilgrims for ever.

The native Annals are silent as to Mayo during the first half of the twelfth century, but, under date of 1169, we read: 'Mayo with its church was burned.' At this time Gillaisu O'Mailin was Bishop of Mayo, whose obit is chronicled by the Ulster annalists in 1184. During his episcopacy the ancient fame of Mayo attracted pilgrims, and there is evidence that many distinguished persons desired to lay their bones in the cemetery of St. Gerald. Thus, under date of 1176, the Four Masters record the death of Domhnall (son of Turlogh) O'Conor, Prince of North Connacht, who was interred at 'Mayo of the Saxons.'

In 1210, Cele O'Duffy, Bishop of Mayo, died, on whose death, Felix O'Ruadain, O.Cist., Archbishop of Tuam, endeavoured to annex the see of Mayo to that of Tuam. The dispute continued for over six years, and on December, 1217, the Pope issued a mandate to examine into the case. At length, in 1221, the Papal Legate, Master James, decided in favour of suppressing the see of Mayo, and its incorporation with that of Tuam.