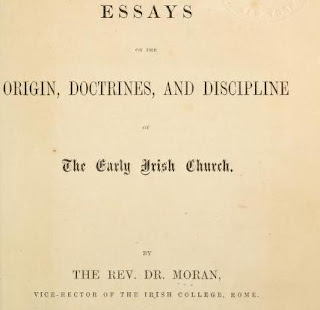 Below is an account of Saint Mochta of Louth, whose feast is commemorated on August 19, by Patrick Francis, Cardinal Moran (1830-1911). There are many legends attached to the figure of Saint Mochta, as he is reputed to be a disciple of Saint Patrick, but his real historical importance lies in the confession of faith which he wrote to Pope Leo the Great to assure Rome of his orthodoxy. I have not been able to locate an English translation of this important text, but Cardinal Moran reprinted the Latin original as an appendix in his book Essays on the Origins, Doctrines and Discipline of the Early Irish Church, from which this account of its author has also been taken:

St. Mochta of Louth, whose name was anciently written Macteus,* was a disciple of St. Patrick, and his death is assigned to the year 534, by Tighernach, the Annals of the Four Masters, and the Annals of Ulster. His name is commemorated in our martyrologies on the 24th of March, and the 19th of August.

Oengus adds to his name the epithets of faithful and devout the great good leader; and Marianus O'Gorman styles him " the lamp of Louth the father of an illustrious family." The gloss on Oengus adds, that he was bishop of Louth, and cites the following curious poem:

"Poverty abode not
With the family of Mochta in his fort of Louth ;
Three hundred bishops and one hundred priests were there with him.
Eighty psalm-singing noble youths
Were his household: royal is the enumeration:
Without ploughing without reaping without drying of corn,
They laboured not, save at learning only."

Amongst our many ancient saints, he was remarkable for his longevity and abstinence, both which traits are thus alluded to by St. Cuimin of Connor, in his poem on the characteristic virtues of the Irish saints:

"Mochta of Lugh-magh (Louth), loved
By law and by rule,
That no dainty food should enter his body
For the space of one hundred years."

The life of this saint records that, guided by an angelic admonition, he proceeded to Rome, and there applied himself to the study of sacred literature ; and it further commemorates the offering of a ceraculum or writing-tablet, which he made to the then ruling pontiff. When he visited Rome, the memory of the heretic Celestius was still familiar to the faithful of that city, and the well-known words of St. Jerome were fresh in their ears: "Satan, though silent himself, barks through a huge and corpulent mountain dog, who can do more damage with his claws, than even with his teeth ; for he is by descent of the Scotic nation, which is adjoining Britain, and like another Cerberus, according to the fables of the poets, must be struck down with a spiritual club, that thus he may be silent for ever with his master Pluto."

Some seem to have feared that Mochta might, perhaps, be infected with a similar contagion, and for this reason he was compelled to vindicate the sincerity of his faith, by presenting, about the year 460, to the great St. Leo, a profession of his belief, of which a copy, written about the year 700, was discovered by Muratori amongst the precious manuscripts of the once famous Irish monastery of Bobbio, and was published in his Anecdota Ambrosiana.

St. Mochta, in this formula of faith, dwells almost exclusively on the doctrine of the blessed Trinity and on the Apostles' Creed ; indeed it presents a striking similarity with the creed recited by St. Patrick in his Confession, whilst scarcely a hint is given regarding any of those heresies which disturbed the Churches of Britain and the continent. Of his own Church, he says: "we are as yet only in the way to truth" (nos adhuc infenestra id est, in via lucis); and of himself he adds: "why do people interrogate me whence I come ? I am a pilgrim" (ut quid quaeritur patria mea ? Peregrinus ego sum); and subsequently he thus briefly but beautifully tells us what was his opinion as to the special prerogative of Rome :

"If, for the fault of one individual, the inhabitants of the whole country are to be deemed accursed, let that most blessed disciple, too, be condemned, I mean Rome itself, from which hitherto not only one but two, or three, or even more heresies have gone forth ; and, nevertheless, none of them could get hold of, or contaminate the Chair of Peter, that is to say the see of faith."

* The Irish a being pronounced like the diphthong au or o, was one of the chief causes of the discrepancy in registering the name of this saint. In some manuscripts of Adamnan, he is styled Mauctaneus, Afaveteus, and Mauctem. The Vita S. Dagei calls him Afoccheus, and subsequently Mochteus. Jocelyn, in his life of St. Patrick, gives his name as Moccheus; and with continental writers, he is commonly known by the name Macceus. Tighernach thus records his death, in 534 : "Dormitatio Moctai discipuli Patricii, xvi. kalend. Septembr. Sic ipse scripsit in epistola sua; Mocteus peccator presbiter Sancti Patricii discipulus in Domino salutem." This same entry is given in the Annals of Ulster ; but he is said to have signed his own name Macutenus. See Reeves' Adamnan, page 6, seqq. ; Colgan Acta SS. page 729, seqq. ; Martyr, of Christ Church, I. A. S., 1844, page Lxix.; Todd, St Patrick, page 39, seqq.; Ware, de Script Hib. lib ii. cap. 1.

Essays on the Origins, Doctrines and Discipline of the Early Irish Church by the Rev Dr Moran, (Dublin 1864), 92-4.