August 29 is the commemoration of an early bishop whom tradition associates with the mission of Saint Patrick. Saint Winoc (Winnoc, Uindic, Uinnic) appears to have been identified with two different locations, one in County Down and the other in County Armagh. Canon O'Hanlon struggles to reconcile the evidence for these locations, but believes that Colgan made an error in locating Bishop Winnoc's seat in County Antrim. I have omitted some of the topographical wrangling from his account below: 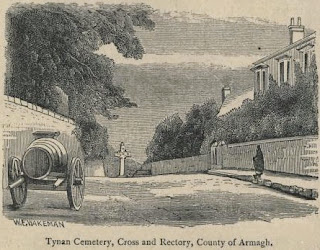 WHEN with indomitable zeal, St. Patrick preached the word of God throughout Ireland, he found there numerous disciples, who accepted his teaching and profited by his example. Their names are also recorded in the lists of our National Saints; although, indeed, their acts seem discoverable in many instances, only as episodes among those given in Lives of the great Apostle. An instance occurs in the case of the present holy man. By Colgan, he is styled St. Uindic, Bishop of Rath-Easpuic Innic. He is also called Winnoc. In O'Sullevan Beare's Catalogue, this Saint's name is likewise entered. However, very little is known regarding his early history, or the place where he was born, He flourished in the fifth century. This Saint is registered as one of St. Patrick's disciples; but, when he became attached to the Irish apostle is uncertain. The following anecdote has been preserved for us, in the Acts of St. Patrick, and, it serves to give us an idea, that while a confidential friend and esteemed highly by the great Patriarch of the Irish Church, Winnoc well deserved that trust, owing to his spirit of devotion and true humility. At one time, St. Patrick and St. Winnoc sat together, when engaged at a religious conference. While speaking of the Deity, and of things which especially concerned Him, these holy councillors referred to the Divine precept of charity, and they remarked that both by word and work were they bound to part with their garments, to clothe persons, who were in need of such comforts. At that moment, a cloak appeared to descend from Heaven, and it fell between them. This portent they regarded, both as an approval of their pronounced sentiments, on the part of the Most High, and as an earnest of those rewards, which they should not fail in obtaining, from the Father of lights, to recompense their future sacrifices. The saints felt greatly rejoiced and comforted; but their minds were filled with divergent opinions, regarding that miracle. Each one ascribed it to the other's merits. St. Patrick asserted, that this gift was intended for Winnoc who had perfectly renounced all his worldly possessions, for the sake of Christ. On the other hand, St. Winnoc alleged, that it had been sent to St. Patrick, who, although possessing everything yet kept nothing; for, he had left himself naked for God's sake, while clothing numbers, who were poor and naked. While such discussions, dictated by sincere humility on both sides, continued, the cloak was again elevated towards Heaven, and it suddenly disappeared. But, in its stead, two cloaks were next seen to descend from above. These were intended respectively for both Saints ; and thus, all reason for future discussion on that point was removed, owing to this celestial indication, that both were eminently deserving Divine approbation.

At this time, both were probably in the north-eastern part of Ireland, and, it is thought, in that district known as Hua Dercachein, said to have been in Dalaradia. However, this meeting possibly took place among the Oirghialla, a powerful tribe, descended from the three Collas,who conquered the ancient Ultonians. The country of this sept originally comprised the greater part of Ulster; and the three Collas, viz. Colla Uais, Colla Dachrich and Colla Meann, were the ancestors of distinguished northern clans. According to Marianus O'Gorman, the church of Teaghneatha—situated within that territory and in the Diocese of Armagh—was connected in an especial manner with St. Uindic or Winnoc. In mediaeval documents, this place has been written Twinha; and it is now represented by the modern townland and parish of Tynan, in the baronies of Tiranny and Armagh, County of Armagh... This place and the Saint in connection with it have been rendered "Winnic of Tynan," in the diocese of Armagh, by the Rev. William Reeves, and by Dr. John O'Donovan. The remains of an ancient stone cross, highly ornamented, and which originally stood within the grave-yard, have been built into the wall of the church-yard, for their greater preservation...

Besides the large district of the Oirghialla, there were two other great divisions in Ulster, and known as Dalriada and Dalaradia... The country of the Hua Dercachein likewise formed a sub-division of the ancient territory of Uladh...we are informed, that at Rath-Easpuic-Innic, St. Patrick built a church, and this is said to have been situated in the territory of Hua-Derca-Chein. According to one account, this districts lay in the present barony of Castlereagh, County of Down, and adjacent to Strangford Lough. The Genealogies of the Hy-Earca-Chein are to be found in the Book of Lecan. The more ancient line of chiefs in the territory of Leath Chathail or Lecale belonged to the Ullta or Clanna Rudhraidhe. Over Rath-Easpuic-Innic, however, and in the district of Dalaradia, the Apostle of Ireland is said to have appointed Vinnoc, as Bishop.... It seems sufficiently probable, that while St. Vinnoc had been connected with Teaghnetha or Tynan, he had charge, moreover, of Rath-Easpuic-Innic, which gave him claim to be regarded as one of our primitive Irish bishops. In identifying Hua Dercachein with the valley of the Braid, in the County of Antrim, Colgan has fallen into an error. It seems rather to have been a tract in the northern part of the County Down, or on the confines of Down and Antrim...

However, notwithstanding the foregoing false conjectures as to locality, St. Vinnoc was venerated on the 29th of August, at a church belonging to the Diocese of Armagh, commonly called Tuighnean, but more correctly Teagh-neatha. Such is the identification of Marianus O'Gorman, in connection with his entry of St. Uinnic in the Calendar. The published Martyrology of Donegal registers a festival in honor of Uindic, of Tuighnetha, at this same date. Moreover, Uindic, Bishop of Rath-Easpuic-Innic, has been placed, by Rev. William Reeves, among the Saints of Down, Connor and Dromore, in that Calendar which he has compiled for these Dioceses. The day for his festival, is the 29th of August.