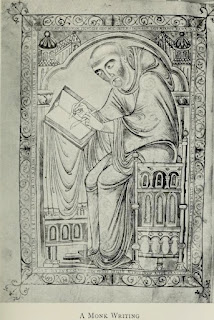 September 17 is, according to some sources, the feastday of Saint Brogan-Cloen, Abbot of Rostuirc. He is the second of the authors who composed a hymn to Saint Brigid to be commemorated this month, the first being Saint Ultan of Ardbraccan whose feast is celebrated on September 4. A translation of the hymn of Saint Brogan-Cloen can be found at my other blog, Trias Thaumaturga, here.  The account of his life below has been taken from O'Hanlon's Lives of the Irish Saints:

Although by some, the present saint has been identified with a St. Brogan, of Maethail-Bhrogain in Waterford , or Brocan the Scribe commemorated in the Feilire of Oengus at the 8th of July yet is he to be distinguished, as the author of an Irish Poem, in which are celebrated the life and virtues of the great St. Brigid. It is possible the attribute of being a scribe, with the accidental synonym applying to both, may have produced such an impression. The Bollandists, apparently calling his cultus in question, still introduce their notices of Broganus, at the 17th of September. This saint is also called Bercan, Brechan, Brecan and Brocan. In Latin, his name is usually written Berchanus, Broganus or Broccanus.

On this day, in the Feilire of St. Oengus, there is a festival for Bracan or Broccan, of Ruiss or Roiss Tuircc. In a scholion appended, this place is indicated as being in Mag Raigne in Ossory; and, by the commentator, he is said to have been connected with Cluain Imorchuir, for which a mysterious derivation is given. We find, at the 17th of September, this entry, “Broecan Rois tuiric," in the Martyrology of Tallagh. According to the Calendar of Cashel and Marianus O'Gorman, he is venerated on this same day. St. Brogan Cloen was born, it has been supposed, about the close of the sixth or beginning of the seventh century.

At the request of St. Ultan of Ardbraccan, Brogan composed the Life and Acts of St. Brigid in an Irish poem. In it, her sanctity and miracles are recorded. The place where this tract was written is said to have been either at Slieve-Bloom or at the Cluainmore of St. Maidoc. These accounts are gleaned from an anonymous writer or scholiast in a short preface; and Colgan places this Irish poem, with a literal Latin translation, foremost among his six Lives of St. Brigid. He assigns its authorship to A.D. 526, but this is manifestly too early a date for its composition, as it ranges back to a year long previous to St. Brogan's birth. The " Chronicum Scotorum " places the death of Ultan Mac Ui Conchobhair on the second of the Nones of September in the year 653. However, as the Annals of the Four Masters give Ultan's age to be one hundred and eighty years, when he died on the 4th of September, 656; Colgan argues, that he may have been living A.D. 526, to assist St. Brogan Cloen in the composition of that Hymn in praise of St. Brigid. St. Brogan is named as abbot of Rostuirc, at the year 525, by Archdall, who rests his statement on the authority of Colgan. That early date, however, cannot be allowed. It is said by an old scholiast, that St. Ultan of Ardbraccan collected the Acts of St. Brigid for St. Brogan Cloen. The same scholiast informs us, that our Saint's poem, on St. Brigid's virtues and miracles, had been composed in the time of King Leogaire's son Lughadh, Monarch of Ireland, and when Alild, son to Dulaing, was King of Leinster. But Colgan justly thinks this poem in question could not have been written in King Lugad's time, as the latter died over twenty years before the rest of St. Brigid, an allusion to which latter event is contained in a concluding stanza of that hymn. The death of Lugad also occurred before Alild obtained the government of Leinster. Ailild died in the year 526, and in the twentieth year of his reign, according to the three different catalogues of the Leinster Kings. Colgan supposes it nearer the truth to maintain, that Brogan's Hymn was composed, in the time of Muircheartach, King of Ireland, who was contemporary with the aforesaid Alild of Leinster. Hence he imagines, this poem was written, about the year 525. It was most probably composed in the seventh century, as Sir James Ware reckons Brogan amongst the writers of that period ; although his editor, Harris, adopts Colgan's opinion.

The poem in honour of St. Bridget contains fifty-three stanzas. In it the author celebrates the virtues and powerful intercession of the Holy Virgin, and manifests his own tender devotion towards her. He also indicates, that a certain measure of reward should be vouchsaved to those, who read or hear it recited. According to O'Reilly, there are Manuscript copies of this Hymn extant, in Trinity College Library, Dublin. After Colgan's time, this poem was again published in 1792, by Mr. Richard Plunkett, of the County of Meath. It was accompanied by a rendering in modern Irish. In a small brochure intituled "A Bouquet for St Bride," the Very Rev. Nicholas Murphy, P.P., has introduced the following Prayer of St. Brogan : " I will pray to Holy Bride, with the Saints of Kildare ; that she may stand between me and judgment ; that my soul may not perish : the nun that roamed the Curragh, is my shield against sharp arrows; except Mary who can compare with my Bride; two holy virgins are above; my guardians may they be, Holy Mary and my Bride on whose intercession all my happiness may depend."

St. Broghan again informs us that :

"Brigid never loved the world, and her thoughts were ever in heaven. She was kind-hearted and charitable, and had no care but for God alone, and God worked more wonders through her than through any other Irish saint. She showed the same love to all, to the servants as well as to her spiritual daughters, to beggars, and to the sick."

We are indebted to the poet-priest of Ossory, St. Broghan of Kilbrahan, for some of the most edifying traits in the life of St. Brigid of Erin, as well as for the fervour of the diocesan devotion to the first and most illustrious Irish Nun. Brogan wrote another Poem, according to Roderick O'Flaherty. Yet, in another part of his work, O'Reilly seems to attribute this composition to Giolla na naomh O'Dunn, chief bard to the King of Leinster, and who died in 1160. We are told, in St. Abban's Life, that on a certain occasion, some swine belonging to him were stolen by a nephew of this saint. Directing his course towards Ossory, to recover the property of his monastery, Abban paid a visit to Berchan as he is there called. Our saint accompanied him to the presence of his nephew. Brogan entreated him to restore the stolen property. But that abandoned wretch made an attempt, to take away St. Abban's life, and in the very act struck down his uncle. Again, attempting a stroke at Abban, his hand became paralysed. Our saint was restored, and his wounds were healed by Abban; while the wicked nephew, feeling remorse for his act, restored those animals he had taken. After this, both the saints established a bond of friendship between themselves and their respective communities. In this federation, on other occasions, they included Saints Brandan, Moling, Flannan, Munna, and others. Our saint is also said to have been venerated at a monastery, called Cluainnimurchuir, according to the Salamancan MS. of St. Abban's Life, formerly in Colgan's possession. Edward O'Reilly incorrectly places his death, as occurring in the year 526. However, the exact year of our saint's death is not known ; but, its day seems to have been the 17th of September, on which his memory was afterwards revered.