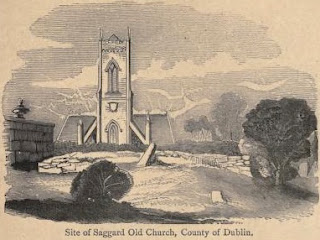 The Irish calendars at March 3 commemorate Saint Sacer or Mo-sacra, abbot of Saggard, County Dublin. The Martyrology of Donegal records:

O'Hanlon records what is known of him:

This saint, variously named Sacer, Mo-Sacer, Mo-Sacra, Mothacra and Moacra, has his Acts given by Colgan, and more briefly still by the Bollandists. He was the son of Senan, son to Luachan, son of Roer, son to Loga Lethanglais, son of Conall Anglonn, son to Eochad, son of Fieg, son to Factna, son of Senchad, son to Olild, son of Maelcroc, son to Roderic, King of Ireland. He appears to have been called Sacer, from a Latin word, which expresses holiness of life, by which he had been distinguished; and, to this cognomen, the endearing term, Mo, was prefixed. However, Sacer not being a name in use amongst the ancient Irish, we must suppose it, as only secondary to a previous and more national one. This holy abbot appears to have flourished, before or about the middle of the seventh century, if we are to rely upon accounts, furnished by our Martyrologists, regarding his genealogy.

He erected a monastery, afterwards called after him, Tegh-Sacra, or "the house of Sacer" and, over this foundation, he presided as abbot. The place is now known as Saggard, a small village, and the head of a parish, seven Irish miles S.W. from the Castle of Dublin. The site of Saggard's ancient monastery and chapel is said to have been on a rise of the Dublin mountains, about one mile beyond the modern village. Saggard, at first bore the name of Tassagard. It is related, that Mo-Sacra also governed, for some time, Finn-magh monastery, at Fotharta, within the province of Leinster.

[A parish at Tomhaggard, County Wexford, believes that its locality can be identified with Finn-magh:

As is the case with many parishes and townlands, we find the name of Tomhaggard, as it is known to day, rendered in several forms in ancient charters and deeds. The earliest name of the place was probably "Fion-magh", which name is mentioned in one or two old documents.

The parish, however, derives its present title from Saint Mosacer, who succeeded St. Abban as Abbot of Camross and who, incidentally, was also patron of Saggart in Co. Dublin. Tomhaggard stems from the old spelling of 'Tomhager' which, in its uncorrupted form, meant "Tomb of St. Mosacer". There is no extant tradition relating to the exact position of the burial-place of this saint in Tomhaggard. St. Mosacer died in 650 and the local patron day was on March 3rd.]

Mo-Sacra assisted at a synod held, in the reign of Comgall, King of Ireland, about the year 695, and under the presidency of Flann, Archbishop of Armagh. At this council over forty bishops and abbots were present. Colgan had a copy of the Acts of that synod. Our saint is thought, also, to have been abbot, at Clonenagh ; but, it is more than probable, a Mosacra who had been abbot lived there, at a later period. He appears to have been confounded with our saint, in the Calendar of Cashel, which states, that Mo sacra lived, in the time of Neill Glandubh, King of Ireland. Mo-Sacra of Saggard must have died, however, during or before the reign of that monarch's great-grandfather; since, he is mentioned, in the Festilogy of St. Oengus, which was written, after the year 792, or during Aedh Oirdnidhe's reign. The festival of our saint was kept, on the 3rd of March, as appears from the Feilire of St. Oengus. His name is entered, at the same date, in the Martyrology of Tallagh, as Moshacra mac Senain of Tigh Thacra. The Calendars of Cashel, of Marianus O'Gorman and of Maguire have their relative notices regarding him. In the Martyrology of Donegal is set down on this day, Mohsaccra, Abbot, of Cluain-eidhneach or Clonenagh, in Laoighis, or Leix, and of Tigh-Sacra, or Saggart, in the vicinity of Tamhlacht, and of Fionn-mhagh in Fotharta. The Kalendar of Drummond, at the 3rd of March, notices the Natalis of Mo-Sacro and of Cele.