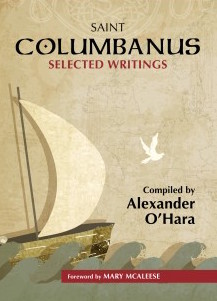 Although there is no doubt of the historic importance of Saint Columbanus, it must also be acknowledged that he was in some ways a controversial figure. To my yellowing copy of Columbanus in his Own Words mentioned in the first of this series of posts, I have now added a nice crisp copy of a new title on the same lines, Alexander O'Hara's Saint Columbanus - Selected Writings, which you can preview on the publisher's website here. Dr O'Hara will also be bringing out a complete English translation of the Life of Columbanus by Jonas of Bobbio, inevitably alas, a rather more expensive tome of which details can be found here. Below is a short extract from the introduction to the Selected Writings in which the author looks at some of the differing reactions which the strong personality of Saint Columbanus has provoked:

The Irish saint and monastic founder, Columba the Younger, or Columbanus ('the Little Dove') as he was more affectionately known (c.550-615), can appear a stern and unsympathetic character. He was a man of extremes who provoked mixed reactions both from his and from our own, more recent, contemporaries. The Oxford medieval historian, J.M. Wallace-Hadrill dismissed him as a 'savage old saint' while Robert Schumann, one of the architects of the European Union, lauded him as a pioneer of European civilization and unity. More recently, Pope Benedict XVI spoke of him as being 'one of the Fathers of Europe'. In his day many regarded Columbanus as a saint, but others vilified him as a troublesome upstart who dared to speak out on Church affairs. Although a divisive figure, he is nonetheless one of the most enigmatic and fascinating figures from the early medieval 'Age of Saints'.