The Tomb and Relics of Saint Columbanus 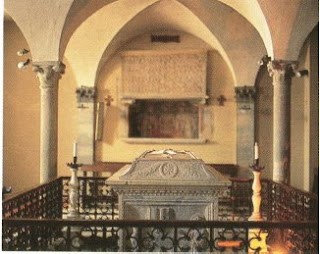 Below is a short paper by Margaret Stokes on the tomb and relics of Saint Columbanus written in the late 1880s. As we are dealing with scholarship well over a century old I would treat the theories of the origins of the artistic styles offered here with caution, but the description of the relics is most interesting:

Miss MARGARET STOKES, through the Director, communicated a paper on the tombs at Bobio of St. Columbanus and his followers, Attalus, Congal, Cummian, and others, whose names are given by Padre Rossetti in his Catalogue of the followers of Columbanus, but in their Latin forms, the Irish equivalents to which are omitted.

The tomb of Columbanus is a white marble sarcophagus, formerly surmounted by a marble recumbent statue of the saint, the front and sides of which were adorned with bas-reliefs illustrating events in the life of the saint. Among the interesting features in these bas-reliefs should be noted the booksatchell carried by St. Columbanus in the first, and the watervessel presented by Gregory the Great to the saint at the consecration of his monastery in the central compartment. This sarcophagus stands as an altar in the crypt of the old Lombardic church dedicated to the saint at Bobio, while the tombs of those disciples who followed him from Ireland to Italy are ranged in the walls around that of their master.

The sculptures on five of these sarcophagi offer fine examples of the interlaced work described by Canon Browne at the meeting of the Society on February 19th, as found in Italy at this period and before it, even in the time of imperial Rome. Such patterns were spoken of by Miss Margaret Stokes in her paper read upon the same occasion as gradually introduced with Christianity into Ireland, and there engrafted on a still more archaic form of Celtic art. Thus an Irish variety of such pattern sprang into life. The fact that there is no trace of such Irish individuality in the decorations on the tombs of the Irish saints at Bobio, that there is nothing to differentiate these designs from those that prevailed throughout Lombardy in the seventh century, goes far to prove that this style did not come from Ireland into Italy. Whether, on the other hand, it reached the Irish shore borne directly from Lombardy by the passengers to and fro from Bobio to its parent monastery in Bangor, Co. Down, is yet matter for future research.

The next monument described was the marble slab inscribed to the memory of Cummian, bishop in Ireland at the beginning of the eighth century. We learn from the epitaph itself that Liutprand, king of Lombardy from A.D. 720 to 761, had the monument executed of which this slab was the covering, the artists's name, Joannes Magister, being given at the foot. The inscription consists of nineteen lines, twelve of which are laudatory verses in hexameters, the remaining portion being a request for the saint's intercession.

The knife of St. Columbanus, described by Mabillon in 1682, as well as by Fleming, is still preserved in the sacristy of the church. It is of iron, and has a rude horn handle. The wooden cup out of which the saint drank is also preserved, and in the year 1354 it was encircled by a band of silver, with an inscription stating that it had belonged to St. Columbanus. The bell of the saint is another relic, and it is known that on the occasion of the translation of the saint's relics to Pavia this bell was carried through the streets of that city at the head of the procession.

The vessel brought by pope Gregory the Great from Constantinople, and given by him to St. Columbanus at the consecration of his monastery, agrees in form with that which is represented in the bas-relief on the saint's tomb, and is said to have been one of the water vessels used at the wedding feast at Cana in Galilee. A silver bust representing the head of St. Columbanus completes the list of relics connected with this saint, which are still preserved in the sacristy of his church at Bobio.

In the discussion that followed, Professor Browne said he was convinced, after careful examination of Miss Stokes's careful drawings and diagrams, that the Hibernian theory of the Irish origin of interlacing ornament in Italy was now quite dead.

With regard to the date of a remarkable vase preserved at Bobio, and said to have been given to St. Columbanus by St. Gregory, the President thought the vase was quite as early as if not earlier than St. Gregory's time, and probably of Greek origin.

Thanks were ordered to be returned for these Exhibitions and Communications.