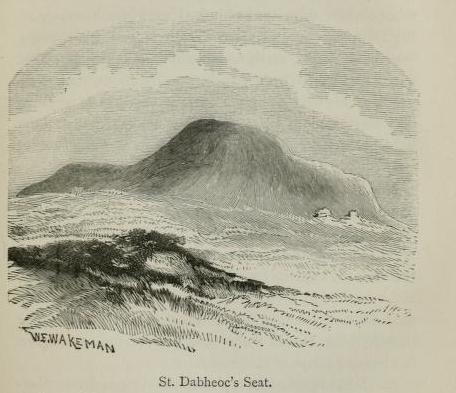 January 1 is the feast of Saint Dabheoc of Lough Derg, a holy man who illustrates many of the difficulties involved in the study of the early medieval Irish saints. First, his name is rendered in a number of different ways in Irish and Latin and thence in English transliteration- Dabheoc, Dobheóg, Davog, Beoc, Mobheoc, Beotius and Abeogus- to name but a few, plus he is credited with three different feast days on various Irish calendars. Secondly, although some of the genealogical sources establish his lineage within the tribe of the Dál bhFiatach of east Ulster, others muddy the waters by suggesting that he was the son of a Saxon princess Díona and her royal consort Brachan, king of the Britons. And it might be said that Saint Dabheoc also illustrates how the cult of a saint does not always remain static but can wax and wane over the centuries. For despite being 'ranked among the chief saints of Ireland' by Cuimin of Connor who praised 'Mobeog, the gifted' in his hymn in praise of the Irish saints, modern scholar Pádraig Ó Riain feels that as Lough Derg developed into the site of Saint Patrick's Purgatory in the twelfth century, the earlier Saint Dabheoc began to be overshadowed. The island containing his church, for example, once called Oileán Dobheóg, is now known as Saints Island, just as the parish once called Tearmann Dobheóg, is now called Templecarn. His name continues to live on though in the townland of Seeavoc (Suidhe Dabheog), location of a natural stone feature known as Saint Dabheoc's Seat, which borders the southern side of Lough Derg. The Annals of Ulster record two separate instances of Saint Dabheoc's postmortem miraculous powers when the saint revenged himself upon those who despoiled his church. The first is from the year 1070, the second from the year 1196:

Rev. B. Mac Carthy, ed. and trans., The Annals of Ulster, Vol. II (Dublin, 1893), 23, 225.
In a letter dated November 1, 1835, John O'Donovan of the Ordnance Survey recorded his reflections on Saint Dabheoc drawing on the work of the great seventeenth-century Donegal hagiologist, Father John Colgan:

Colgan, who had more materials before him than any man, who wrote since his time, was able to collect the following facts only about the history of this place; speaking of Daveog, the patron, he says:

He is called Dabeocus in general, and often Beoanus in Latin. He is the patron of a very celebrated church in a certain lake in Ulster, called Loch-Gerg, in which is that celebrated Purgatory of St. Patrick, whence either the lake itself, or the place in which it lies, is called Gleann Gerc, where in the adjacent territory St. Dabeocus is held in the greatest veneration to the present day, and his festivity is observed three days in every year, according to our Festilogies, viz., on the 1st of January, 24th of July, and 16th of December. So Marian Gorman, Cathal Maguire and the Martyrologies of Tallaght and Donegal. But the Calendar of Cashel places his festival day only on the 16th of December. It is stated in the beginning of the Irish Life that he had foretold several things about the holiness and virtues of St. Columb many years before the latter was born, from which it follows that he flourished in the time of St. Patrick. He is ranked among the chief saints of Ireland by Coimin of Cumber in his book written concerning them. Colgan traces the pedigree of St. Dabheoc to Dichu, St. Patrick's first convert, from which he infers that he was of the race of the Dalfiatachs and that his country lay about Lecale, in Down.

Michael Herity, ed. Ordnance Survey Letters Donegal- Letters Containing Information Relative to the Antiquities of the County of Donegal Collected During the Progress of the Ordnance Survey in 1835 (Four Masters Press, Dublin, 2000), 122-123.

Canon O'Hanlon included an article on Saint Dabheoc, divided into two chapters, in the first volume of his Lives of the Irish Saints. In the first chapter he goes into a great deal of detail about his reputed British ancestry so I have chosen to omit this here and move to the second part which musters the  evidence from the calendars and other sources:

[FIFTH OR SIXTH CENTURY.]
In the "Martyrology of Tallagh" we find this insertion: Aedh, Lochagerg, alias Daibheog. We may take it for granted that this saint lived probably about the close of the fifth or the beginning of the sixth century. It is likely he came over from Wales; whether alone or with some of his family does not appear. Probably he landed at first on the eastern or south-eastern coast of Ireland. Thence he travelled northwards, and he appears to have taken possession of a lonely island, which was situated within a lake of some extent among the wilds of Donegal. Afterwards, it became very famous as a place for pilgrimages. While the Saxons extended their conquests over the Britons, here the saint appears to have found a quiet retreat.
In a wild and romantic district of Templecarn parish, within the barony of Tirhugh, and county of Donegal, the pilgrim or tourist will find the spreading waters of renowned Lough Derg, with its three separate islands. The largest of these was known as the Island of St. Dabeoc. Probably it was so called because there he had been the first founder of a religious establishment. However, Dabeoc had always been regarded as the patron of this place. There, also, three festivals were annually held in his honour, namely, on the 1st of January, on the 24th of July, and on the 16th of December. His name is Latinized Dabeocus, and he is frequently called Beanus.
A very interesting account of the Island of St. Dabeoc, in Lough Derg, — or the Red Lake — by some writers called Logh-gerg —is given by Sir James Ware. To this an engraving is appended. Here we are presented with a map of this small island, having the Caverna Purgatorii marked upon it. This is centrally situated, while surrounded by a church, houses, and circles or stations dedicated to various saints.  One of the circles is called "Lectus vel Circulus S.Abogi." By mistake or misprint this latter word must have been intended for Dabhogi or Dabheog.
At a very early date, this saint lived on the island; but for what term of life does not seem to have been ascertained. Few notices of the place occur  in our ancient annals. We read, in the "Martyrology of Donegal", that Dabheog belonged to Lough Geirg or Loch-gerc, in Ulster. At the eastern extremity of that lake were to be found Patrick's Purgatory's and Dabheog's Island. Also a monastery of St. Augustine's Order, in which there were canons, stood at the western extremity of this same lake. It is said to have derived its origin from our saint, and to have been dedicated to the holy Apostles St. Peter and St. Paul. It seems likely that the austere manner of life practised by St. Dabeoc on his island, gave rise to the frequent pilgrimages for penitential exercises at a later time. According to St. Cummin of Connor, in the following translation from his Irish poem on the characteristic virtues of the Irish Saints:

"Mobeog, the gifted, loved,
According to the Synod of the learned,
That often in bowing his head,
He plunged it under water."

Whether or not St. Patrick had any acquaintance with St. Dabeoc can hardly be discovered. But, we are told, while the latter, with his clerics, lived on the island, and when his vigils had been protracted to a late hour one night, a wonderful brightness appeared towards the northern part of the horizon. The clerics asked their master what it portended. "In that direction, whence you have seen the brilliant illumination," said Dabeog, "the Lord himself, at a future time, shall light a shining lamp, which, by its brightness, must miraculously glorify the Church of Christ. This shall be Columba, the son of Feidlimid, son of Fergus, and whose mother will be Ethnea. For learning he shall be distinguished; in body and soul he shall be chaste; and he shall possess the gifts of prophecy.
It is stated —but on very insufficient authority— that St. Dabeoc made his religious house subject to the great Abbey of Armagh. On the island, too, there was a fine chapel, and convenient houses for the monks, the remains of which were to be seen before the last century, according to local tradition. St. Dabeoc is reputed to have been there, and the subsequent stories about this island on Lough Derg are fiill of traditional and historic interest.
The possessions of the original monastery probably gave rise to the denomiaation of Tearmon Dabheog, which lay on both sides and near "Grey, holy Derg of the lake."
The Magraths were the hereditary termoners or custodians of the church lands, known as the Termon of St. Daveog, at Lough Derg. Their ruined castle of Termon Magtath, or Termon, as it is more usually called, is popularly believed to have been built by Malmurry, or Myler Magrath. It is situated at the northern extremity of Lough Erne, about half a mile west of the pleasant little town Pettigoe, in the county of Donegal. Like most edifices of the kind, erected in the sixteenth century, it consisted of a strong and massive keep, with circular towers at two of its angles, and encompassed by outworks. The scenery in the immediate vicinity of the castle is very beautiful. With the plantations of Templecarn glebe, and with those of Waterfoot, the lake shores are most delightfully fringed. Thus part we, at present, from the patient, if not discriminating, ordeal of investigation into the present saint's historical range so remote from our own. Yet, no period or age has sped without exerting some tangible influences on the state of society we inherit. The very aspect of holiness lingers still around the scenes where the saints loved to dwell.

I will return to Saint Dabheoc on his secondary feast of July 24, the date on which it is currently celebrated at the sanctuary of Lough Derg itself.
Content Copyright © Omnium Sanctorum Hiberniae 2012-2022. All rights reserved.
Posted by Marcella at 06:30