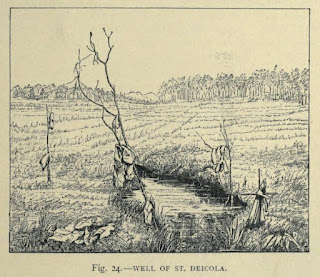 January 18 is the feast of Saint Dicuil (Deicola), a companion of Saint Columbanus and founder of the monastery of Lure. He is but one of the many Irish missionaries who laboured in Europe and is one of those mentioned in the article below taken from a Catholic newspaper of 1835. Sixty years later Saint Dicuil was also among those whose steps were retraced by scholar Margaret Stokes in her 1895 work Three Months in the Forests of France - A Pilgrimage in Search of Vestiges of the Irish Saints in France and her account of Saint Dicuil is available at the blog here:

In order to convey to the reader any adequate notion of the apostolical labours of that crowd of learned missionaries whom Ireland sent forth, in the course of this century, to all parts of Europe, it would be necessary to transport him to the scenes of their respective missions; to point out the difficulties they had to encounter, and the admirable patience and courage with which they surmounted them; to show how inestimable was the service they rendered, during that dark period, by keeping the dying embers of learning awake, and how gratefully their names are enshrined in the records of foreign lands, though but faintly, if at all, remembered in their own. It was, indeed, then, as it has been ever since, the peculiar fate of Ireland, that both in talent, and the fame that honourably rewards it, her sons prospered far more triumphantly abroad than at home; for while, of the many who confined their labours to their native land, but few have left those remembrances behind which constitute fame, those who carried the light of their talent and zeal to other lands, not only found on a lasting name for themselves, but made their country also a partaker of their renown, winning for her that noble title of the Holy and Learned, which, throughout the night that overhung all the rest of Europe, she so long and proudly wore. Thus, the labours of the great missionary, St Columbanus, were, after his death, still vigorously carried on, both in France and Italy by those disciples who had accompanied or joined him from Ireland; and his favourite Gallus, to whom, in dying, he bequeathed his pastoral staff, became the founder of an abbey in Switzerland, which was in the thirteenth century erected into a princedom, while the territory belonging to it has, through all changes, borne the name of St. Gall.  From his great assiduity in promulgating the Gospel, and training up disciples capable of succeeding him in the task, this pious Irishman, has been called, by a foreign martyrologist, the Apostle of the Allemanian nation. Another disciple and countryman of St. Columbanus, named Deicola, or in Irish Dichuill, enjoyed like his master, the patronage and friendship of the monarch Clotaire II., who endowed the monastic establishment formed by him at Luthra, with considerable grants of land.

In various other parts of France, similar memorials of Irish sanctity may be traced. At the celebrated monastery of Centula, in Ponthied, was seen a tomb, engraved with golden letters, telling that, there lay the remains of the venerable priest, Caidoc, “to whom Ireland gave birth, and the Gallic land a grave.”  The site of the hermitage of St. Fiacre, another Irish Saint, was deemed so consecrated a spot, that to go on a pilgrimage thither was, to a late period, a frequent practice among the devout; and we are told of the pious Anne of Austria, that when in 1641, she visited the shrine of this saint, so great was the humility of her devotion, that she went the whole of the way, from Monceau to the town of Fiacre, on foot.  Among the number of holy and eminent Irishmen who thus extended their labours to France, must not be forgotten St. Fursa,  who, after preaching among the East Angles, and converting many from Paganism, passed over into France; and, building a monastery at Lagny, near the river Marne, remained there, spreading around him the blessings of religious instruction, till his death.

In like manner, through most of the other countries of Europe, we hear or the progress of some of these adventurous spirits, and track the course of their fertilizing footsteps through the wide waste of ignorance and paganism which then prevailed. In Brabant, the brothers of St. Fursa, Ultan and Foillan, founded an establishment which was long called the Monastery of the Irish; and the elegant scholar, St. Livin,  whom, by his own verses, we trace to the tomb of St. Bavo,  in Ghent, proceeded from thence, on a spiritual mission, through Flanders and Brabant, prepared at every step for that crown of martyrdom, which at length, from the hands of Pagans, he suffered. With the same enterprising spirit we find St. Fridolin, surnamed the Traveller, — a native it is supposed, of Connaught, —exploring the Rhine for some uninhabited island, and at length fixing himself upon Seckingen, where he founded a church, and a religious house for females, which he lived to see prosper under his own eyes. Next to the generous self-devotion of these holy adventurers, thus traversing alone the land of the infidel and the stranger, the feeling of gratitude with which after-ages have clung to their names, forms one of the most pleasing topics of reflection which history affords; and few if any of our Irish missionaries left behind them more grateful recollection than, for centuries, consecrated every step of the course of Fridolin the Traveller, through Lorraine, Alsace, Germany, and Switzerland.