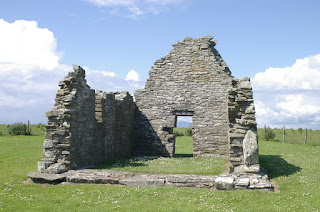 August 17 is the feastday of a Saint John (Eóin) of Saint John's Point, County Down. Virtually nothing is known of this saint, but I visited the church at the location which bears his name in 2009 while on holiday. It is a charming building right on the coast and has only a few farmhouses and a lighthouse for neighbours. There is both a 'bullaun' and a holy well immediately outside the fenced perimeter, as I am pleased to say that Environment and Heritage Service take care of the church ruins. Their sign below shows how the church would have looked originally, it certainly wasn't designed for large numbers or for large people! 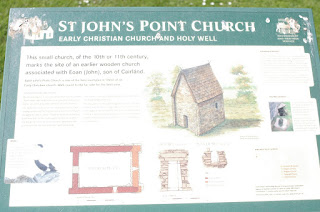 Bullauns are stones with a bowl-shaped depression where water can collect, they are commonly found in Ireland at ecclesiastical sites, and the water in them often used as a cure for headaches. Those who are interested in the New Age line on 'megaliths' invest them with a deep significance, but a more prosaic explanation is that they are simply discarded quern stones. This is the bullaun from Saint John's Point, the step down leads to the well: 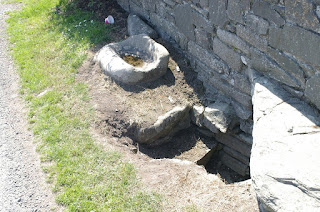 So what do we know of this Saint John? Alas, nothing of his life, but the church is mentioned in medieval records:

St. John's Chapel was valued at three marks in the Taxation of Pope Nicholas, under the name of "the chapel of Styoun," which name seems to have been formed from the Irish words Tigh-Eóin, "John's house." In the calendar of the O'Clerys, the festival of its patron is mentioned on the 17th of August, "Eóin MacCarlain, of Teac Eóin." Immediately after the coming of the English, Malachi, Bishop of Down, granted the church of "Stechian" to the Abbey of Down. At the Dissolution the tithes of this chapel, under the name of St. Johnstown, were appropriate to the Preceptory of St. John in the Ards. The church, which was of a very ancient style of architecture, measured twenty by thirteen feet in the clear.

Thus Saint John, Eóin son of Carlan, is one of the many Irish saints about whose life nothing is known, but whose memory has survived in the placenames and ruins of the locality in which he flourished. May he continue to bless County Down and its people.

Enjoyed that item, as I holidayed in that area last year and photographed those very same items. Met many nice people at the site also.