August 23 is the feast day of the patron of the Diocese of Derry, Saint Eugene of Ardstraw. The website of the diocese has an account of his life here. Below is a short extract from the Irish Ecclesiastical Record on the founding of Ardstraw:

St. Eugene is said to have been a native of Leinster, whilst his mother was from Mugdarnia, in the present county Down; When receiving his early education along with Tighernach the inseparable friend of his after years and a number of others, he was carried away captive along with his companions into Britain by marauding pirates, and held there in bondage. Through the influence of Neunyo, a wise and holy man who presided over the monastery of Kosnat, or Whitethorn, in Scotland, the King of Britain was induced to liberate the youthful captives. Neunyo took them to his monastery, where they pursued their studies for a certain period. A second time Eugene and his companions were carried away captives out of Ireland, and taken into Brittany in Gaul. A miraculous occurrence is said to have taken place whilst they were in captivity there which induced the king to set them free, and to send them back to Kosnat to pursue their studies. After a length of time they returned to Ireland and established several monasteries. Eugene established that of Kilnamanagh in Cualann the modern district of Wicklow and presided over it for fifteen years.

One of his pupils in this place, and afterwards at Ardstraw, was his own cousin or nephew, St. Kevin, whom Moore and Gerald Griffin have immortalized in their verses. In obedience to the orders of his superiors, or, as some say, acting on a Divine admonition, he came northwards in company with his life-long friend and early schoolmate, St. Tighernagh, to found a monastery. Tighernagh selected Clones as the site of his foundation, whilst Eugene journeyed on to Ard-straha by the waters of Loch Derg, and built his monastery at a short distance from the junction of that river with the Strule. The commingling of these two streams forms the Mourne, which, in turn, meeting the Finn at Lifford constitutes the river Foyle. It is said that it was after, and not before, his coming to this place that he was consecrated bishop, and after his consecration he established his see in the place. As various dates are assigned for his birth, so different years are given for his coming to Tyrone and also for his death. However, most of the annalists assign his demise to the 23rd of August, A.D. 617, or 618. ...St. Eugene, we are told, was buried in his church, but no trace of the grave remains, nor does any tradition exist to point out the hallowed spot.

The See of St. Eugene at Ardstraw, Together with a sketch of the History and the Antiquities of its Neighbourhood in The Irish Ecclesiastical Record, Vol.IV,(1898), 385-41. 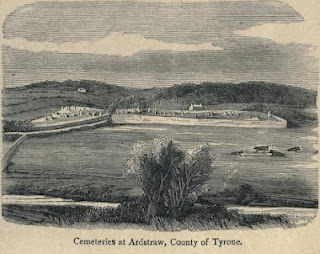 In his account of Saint Eugene [Eogan], Canon O'Hanlon records some of the miracles associated with the saint:

While St. Tigernach and St. Eugene were sojourning at the Little Wood, when the latter was about to depart for Ardstraw, they both took a ramble towards a small eminence, where sitting down they entered on a course of pious conversation. Then having separated, a minister of Eugene recollected that he had left behind a small vessel, from which it was his custom to sprinkle infirm persons with holy water. The next day, Eugene and his minister returned to that same place, when to their great surprise, a fox was found dead, with the vessel belonging to Eugene near him, and which he had attempted to gnaw. It was perfectly preserved, however, owing to the saint's merits. Even a thong of leather attached was found uninjured between the animal's teeth.

Another time, when both of those holy prelates were on a customary visitation of a small nunnery, they found the minister of the Abbess Mossera and of her nuns dead. However, St. Tigernach desired Eugene to place his baculus on the body of the deceased, A great miracle followed, when that servant came to life, and he was restored to his former state of health.

In the monastery at Ardstraw, Eogan led a most holy life, being distinguished for his miracles and for a spirit of prophecy. Instances of the latter gift are furnished, in the case of a wicked Gentile prince, named Amalgid, who had ordered a spear having five points on it to be made, and with this he resolved on immolating innocent victims, in accordance with some pagan custom or superstition, which held possession of his mind. On hearing about such intent, the charitable Abbot went to him, entreating that he should not put it into execution; nevertheless, the cruel tyrant would not be diverted from his purpose. The saint declared, that should he do so, on the third day after the evil deed had been committed, the prince himself must die pierced by that same spear. Such prediction was accordingly fulfilled.

Various of his miracles are related in the old Acts ; but, as some of those marvels are of a legendary character, they may be passed over as not worthy of being here recorded. It is told, that in a certain town named Lettach,one hundred persons of both sexes had been surrounded by pirates; but, having sent word to the holy man, that they were likely to be captured or in danger of perishing, he passed unnoticed through the enemy's camp, and having baptized them, all were brought away unseen by the pirates and were thus saved. Again, it is stated, that while Eugene was travelling through a great wood, which stretched for sixty thousand paces along the River Bann, he met a miserable pauper, who was a leper, on the way. As a charity, he bestowed the two chariot horses he used on that poor mendicant. Such self-sacrificing act was made known by a revelation to St. Corpre, Bishop of Coleraine, who sent two other horses to supply the place of those which had been given away. At another time, on the approach of Easter, Corpre borrowed a Book of Gospels from Eugene, as Eastertide approached, and when the latter wanted it, on the very night of that festival, the Angels of God left it once more on his altar. While the holy Bishop was journeying through a wood called Croibeth, in company with a boy, he recited the fifty Psalms, and afterwards the Lord's Prayer, so far as the words, "sed libera nos a malo." The boy then answered Amen, when an extraordinary echo resounded those concluding words throughout the forest.

On a certain occasion, the holy man, with his retinue, was uncourteously treated at a town, where he arrived towards evening, and where fifty persons of both sexes were assembled at a banquet. There he was denied hospitality, so that he was obliged to remain in the open air all night. He spent it awake, and while fasting he prayed. However, he predicted, that for the future, such a feast should not there take place, nor should the land about it prove fertile. His prophecy was fulfilled, even to that time when the saint's eulogy had been pronounced. However, on the day following, one of the feasters named Caitne, and whose wife is called Brig, invited him and his companions to their house, where dinner had been prepared for their labourers. This dinner consisted of beef and swine's flesh, with beer for their drink. Of such viands, Eugene and his companions partook, having blessed them before and after partaking of their meal. Afterwards, the saint blessed that house, and the cellars of his kind entertainers. He predicted, moreover, that such food and drink should serve their household, so long as no irreverent remark was made regarding them. This condition was observed, only from the Kalends of November to the Pentecost succeeding. The panegyrist of our saint declares, in closing his account of the miracles Eugene wrought during life, that he only recounted a few of those merits, with which the subject of his discourse was so remarkably favoured by the Almighty.

It is stated, that Eugene was living, about the year 570. Having attained a mature term of years, and a full measure of merit in the sight of God, he was happily called out of this world, some time in the sixth century. Having been seized with a grievous infirmity, which grew on him day by day, calling his monks around him, he received Extreme Unction and the Holy Viaticum, with sentiments of the most pious resignation. When such religious rites had been administered, his monks separated into two choirs, and standing, they alternately chanted appropriate psalms. During that pious and solemn celebration of the Divine Office, Angels received the soul of Eogan, and bore it to Christ, whom he had so long and so faithfully served.