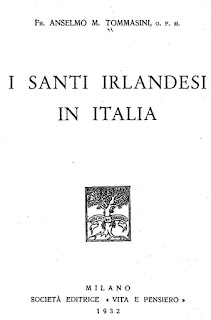 The month of August opens with the feast day of an enigmatic Irish hermit, known only as 'Pellegrino' (pilgrim) who pursued the eremitical life in Italy. Fra Anselmo Tommasini has summarized his story (and what a story!) as follows:

Pellegrino, 'Pilgrim' was born in Scotia, the son of a king named Romanus, who had already been converted to Christianity; in the full vigour of youth, he renounced his right of succession to the throne, distributed his substance to the poor, and set off incognito for Palestine; after making the round of the holy places, he remained for forty years in the desert where Our Lord kept his long fast, and then betook himself to preach at the court of the Sultan. There he was scourged, loaded with chains, and thrown into prison; miraculously set free, he suffered ordeal by fire and emerged unscathed. A prompting from Heaven then directed his course towards Italy; he was thrown into the sea by a ruffianly crew during a storm, but with great presence of mind converted his cloak into a raft, his stick into a mast, his wallet into a sail and seven days later floated into Ascona. He then visited the tombs of the Apostles in Rome and St. Nicholas in Bari, and the shrine of St Michael in the Gargano. Another heavenly prompting then came to him and, under the guidance of a star, he went up into the wildest district of the Apennines and settled in a wood which he afterwards called Romanesca.

After twelve years of terrifying ordeals he succeeded in clearing the wood of evil spirits and retired to live in a cave on a diet of herbs and dew with only the wild beasts of the neighbourhood for company. After living this life for a number of years 'Pilgrim' quitted his cavern to discover in a place called 'Thermae salonis' a stately age-old tree with a hollow trunk. He clambered in and made his home there for the next seven years. Finally at the age of ninety-seven years, nine months and twenty-three days he departed this life.

A certain Peter, who lived with his wife Adelgrada in a village in the neighbouring country of Frignano, had a revelation of the death of the holy anchorite. Husband and wife, with the assistance of an angel, climbed the mountain together, came upon the body, learned the history of the saint from a parchment held fast in his hand, and gave the saint an honourable burial. The news of the precious discovery spread on both sides of the Apennines and Tuscans and Lombards together climbed the hill to possess themselves of the remains. A riot would have broken out had not the bishops present suggested that the body should be placed upon a cart, the cart yoked to a pair of wild oxen, one Tuscan the other Lombard, and the oxen allowed to go as their fancy dictated. The suggestion was greeted with applause and forthwith carried into effect. The oxen departed so quietly as to give the impression that they were tame and came to a halt on the border between Tuscany and Lombardy, more precisely at 'Thermae Salonis'. The building of a basilica in honour of the saint was forthwith taken in hand, and the canonisation and translation took place simultaneously with the dedication of the basilica on 1st August, 643. God immediately began to perform countless miracles through 'Pilgrim's' intercession, and such was the affluence of the faithful that a hospice had to be erected for their accommodation near the church. The first persons to render assistance to those who undertook the pious journey were Peter and Adelgrada. The feast has been fixed ever since on 1st August.

Well, I said it was a good story, didn't I? Perhaps too good a story? Fra Anselmo says that the only manuscript source is a 15th-century codex, although the earliest certain record of San Pellegrino and his church is dated 1110. I noted certain stock hagiographical devices which I've seen before, the fight between rival districts for the saint's body having to be settled by oxen, for example, occurs in a number of Irish saints' lives including that of Saint Patrick. The pious couple who have a vision of the saint's solitary death and go to provide for the proper burial of the remains is another. I was struck too by the obvious scriptural allusions to the forty year fast in the desert and the use of the sacred numbers seven for the sea journey and twelve in the battle with the demons of the woods. There was a glaring anachronism in the supposed visit to the tomb of Saint Nicholas at Bari; since the relics of Saint Nicholas were not taken to Italy until the year 1087 it is hard to see how an Irish pilgrim could have visited them centuries earlier. Saint Nicholas is only a part of the eastern flavour to Pellegrino's tale, I love the image of an Irishman going to preach at the court of the Sultan but since the story places Pellegrino's death sometime before 643, which itself is just about a decade after the death of Islam's founder, the timescale seems a little tight. It's not totally outrageous though to link an Irish traveller with the Holy Land, Saint Adamnán published the account of a Gaulish monk's visit in the late seventh century in his treatise De locis sanctis (On the Holy Places). The interest in pilgrimage to the tombs of the Apostles in Rome is certainly plausible plus there was a distinct devotion to the Archangel Michael in Ireland too. I do wonder, therefore, if under all the layers of later medieval embroidery, there is a real Irish peregrinus in there, one whose native name may have caused the Italians to throw up their hands in despair when they tried to pronounce it and so they just remembered him as 'pilgrim'. His extreme ascetic life certainly fits the bill, as does his wandering impulse. As it stands though, the legend summarized by Fra Anselmo seems to bear out the rule that any piece of hagiography tells us more about the times in which it was written than it does about the times of its subject.

The legend records that God quickly began to work miracles through the intercession of the holy pilgrim and in a charming piece written by an English Catholic priest blogger here, Father Nicholas Schofield records a modern miracle of his own. He was returning with friends from a visit to the mountain-top shrine of San Pellegrino. The drive was a rather frightening one and it was only when they reached the foot of the mountain that the party discovered that the brakes of the car had failed. Had this happened earlier, they would have been in real danger and as a thanksgiving to San Pellegrino, Father Schofield made available an account of the saint's life on his blog. The account, based on various Italian guidebooks the priest bought at the shrine, is essentially the same as the story above, but do check it out as the post is illustrated with photographs and takes the story further than I have done here.

I think I shall enjoy a glass of San Pellegrino mineral water today and toast the holy pilgrim, being an Irish ascetic living on herbs and dew he wouldn't approve of anything stronger!