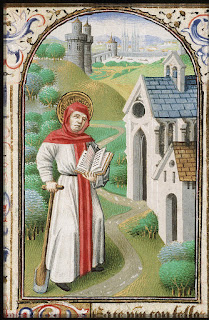 Saint Fiachra (Fiacre), whose feastday is commemorated on August 30, is one of those Irish saints who made his home in continental Europe, in this case France. As any number of websites will tell you, he is hailed as a patron saint of gardeners and forever linked to the horsedrawn carriages of Paris which bear his name. Roísín Ní Mheara, who has made a special study of the Irish missionaries of Europe, first tracks Fiachra in Brittany and goes on to follow the trail of the saint as he moves towards Paris:

Around the middle of the 7th century, Fiachra puts in an appearance in northern Gaul. In the Paris region of Ile-de-France and in the adjoining Brie district which claims him as its patron saint, we find him again, warmly welcomed by Bishop Faro of Meaux on the river Marne. Faro(n), of Burgundian nobility, was one of those who had received Columban's personal blessing as a child, and he greatly favoured Irish missionaries. His abbey, Sainte-Croix of Meaux, was stocked with monks from Luxeuil and Irish pilgrims found a welcome there on their way to and from Rome, for Meaux lay on the old Gallo-Roman route that led from the Channel coast eastward....

Faro alloted Fiachra, a hermit by nature and as such not prone to the comforts of a monastic life inside the Gallo-Roman walls of the noble city of Meaux, a place of his own to settle in, on the abey lands of Brieul. This zone lay to the East, its vast forests considered uninhabitable, infested with 'sorcerers' and their barbaric adherents. That it is deemed appropriate for Fiachra's vocation is no invention of his biographers in order to stress the saint's courage. Centuries later unholy practices such as the 'Witches' Sabbath' are reported in the vicinity.

There in Brieul Fiachra manages to reconcile the impossible - the life of an anchorite with that of a busy prior and missionary. In the clearing he makes for himself he builds a hospice, set apart from his hermitage. This, as well as catering for pilgrims and wayfarers, acts as an asylum for the sick and needy. For their upkeep Fiachra makes the surrounding land arable, creating a huge garden where vegetables, fruit, flowers and medical herbs are grown. And he has, like Columban, his locus deserti, a covert beside a well in a secluded place since called 'Le bois de France'. Here in the forest of Brieul the modest abbot lives and labours, expiring around the year 670. People of all calling visit his grave in search of posthumous cures.

Briefly sketched, this is the story of Fiachra, a saint of France about whose Irish background nothing is reported, except that he was of gentle birth. To get a better grasp of his personality, which must have been outstanding, we need to climb through mountains of legends.

What does iconography tell us? It gives us a humble figure in monk's attire holding a book and a spade, often a basket of fruit at his sandaled feet. Fiachra, the patron of horticulturalists, has, however, an implement at his disposal that is more than a simple spade; considered so holy that it had to be buried with its master. In the oldest effigies of the saint it is not a spade at all, but an Irish cambutta he is holding - one with a 'Tau' head. Whatever the case, tradition affirms that it was through the power of this instrument that Fiachra consolidated his monastic settlement (one is reminded of angelic traditions concerning the foundations of Armagh). The legend of the foundation of Saint-Fiacre-en-Brie, as the abbey came to be known is as follows:

In Brieul the concourse of pilgrims reaches such dimensions that Fiachra is obliged to make a petition to bishop Faro in Meaux for a supplementary piece of land to cater for them. Faro informs Fiachra that he may take as much land as he is able to dig around in one day. Returning to the forest, Fiachra grasps his spade and starts to mark a line for the required extension by digging a trench. The spade barely touches the ground when beneath it a deep cleft appears. Fiachra proceeds with the round, the chasm advancing with him, trees falling to the right and to the left to carve out the spade's way. Soon a wide circle is drawn, with a trench to mark the precincts of a new monastery.

This uncanny performance does not go unobserved. A busybody called in tradition 'La Becnaude' hastens away to Meaux with the news. She denounces Fiachra as a fearful sorcerer to bishop Faro. Whereupon she returns to Breuil with the bishop's order to cease all operations immediately. The Becnaude heaps insults on Fiachra, who sinks abjectly down on a forest boulder to await the arrival of Faro. And there, beside the trench the bishop finds him, but lo! the jagged surface of the rock the saint is seated on has melted, out of sympathy, into a consolatory chair! Tendered proof is a rounded, indented stone, placed beside the tomb that once held Saint Fiachra's remains in the village church where his abbey once stood. Inhabitants of that village are also aware of the site of the famous trench in the forest, earthworks being visible for a long time.

Overwhelmed by such signs of Fiachra's divine calling, Faro promises every assistance. It is also ordained that, since it was a woman who villified the poor hermit, men alone should be allowed to cross the border trench. The Becnaude receives her due personally, for while Fiachra's stone turned smooth and soft as wax, her own countenance takes on the quality of a scarred, jagged rock.

A prohibition for women to set foot within the precincts of the abbey of Saint-Fiacre in Brieul existed down to its dissolution in 1760. We also note that a far stricter monastic rule was observed there, distinguishing it from the seventeen other abbeys subordinate to Sainte-Croix in Meaux which later became 'Saint-Faron' by name.

Up to the ninith century Fiachra's cult was limited to the locality, but by the thirteenth century it had become widely acclaimed and the legend glorified in many liturgical hymns. .. His [St. Fiachra's] relics were removed to the cathedral of Meaux for safety during the sixteenth century Calvinist disturbances...

Twice an English king tried to steal the relics. Henry V was prevented from doing so by his fiery steed refusing to jump the trench. Edward the Black Prince got away with them as far as Normandy, it is said, where having deposited them overnight in a church, he found them next morning glued to the altar!

I am trying to find more information about Fiachra/Fiacre. I am particularly keen to access the early latin lives from the 12th and early 13th century. I have the text but sadly am too ignorant to read the Latin! Is there anywhere I can get a translation?

Sorry for the delay in publishing your comment but ill-health has kept me offline lately. I don't know of a translation of St Fiachre's Life but it might be worth having a look at Canon O'Hanlon's account in Vol 8 of his Lives of the Irish Saints. He uses a wide variety of traditional sources and devotes 3 chapters to St Fiacre. It's available online through the Internet Archive.