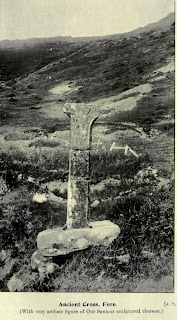 On October 2 the Irish calendars commemorate an abbot of the monastery of Fore, County Westmeath, Maeldubh, who has the epithet 'the little' attached to his name. Fore is the monastery founded by the seventh-century Saint Fechin. The Irish calendars and annals have preserved the names and feastdays of some of his successors, including Saint Maeldubh, but I was unable to find a date recorded in the annals for this particular Abbot's repose. Although I thus do not know the exact period in which he flourished, our small-statured saint is recorded in the earliest of the calendars, the ninth-century Martyrology of Tallaght, as Maelduib Bic, 'Maeldubh the little'. He is introduced in the 12th-century Martyrology of Gorman as Maeldub organ orda, 'Mael dub a golden instrument' to which the note Mael dubh Becc, ab Fobhair, 'Mael dub the Little, abbot of Fobar' has been added. The same information appears on this day in the 17th-century Martyrology of Donegal Maoldubh becc, abb Fobhair, 'Maeldubh Beg, Abbot of Fobhar'.