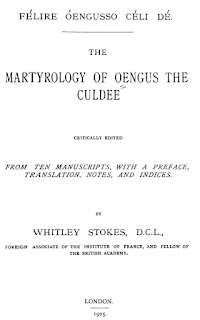 The Martyrology of Oengus commemorates a holy woman of County Tipperary, Sínech daughter of Fergnae, on October 5:

5. A fragment of the precious stone, i.e. Sínech daughter of Fergnae, or good (ergna) is she herself, in Cruachan Maige Abna in Eoganacht of Cashel. Sínech, i.e. Fergna is her father's name. Or she is ergna, i.e. good, from Cruachan Maige Abna, etc.

Saint Sínech is also remembered in the later Martyrology of Donegal:

According to this website Saint Sinech is the patroness of Crohane, County Tipperary and the writer helpfully provides information from Canon O'Hanlon:

St Sinech is given as the Patroness of Crohane. The Mart. of Donegal commemorates her on Oct. 5th. says she was the daughter of Fergna of Cruachan Magh Abhna and of the race of Eoghan More, son of O. Olum according to the genealogical history of the Irish saints. The book is wrong in placing Magh Abhna in Co. Limerick.

O’Hanlon says “she is mentioned also on Oct 5th by the Feilire of St Aengus, and as the daughter of Fergna of Cruachan Muige Abnae in Onacht Cashel”. Maurice Lenihan says “the virgin is likely the sister of St Senachus, Bishop, who was with St Ruadhan and St Columba of Terryglass among the pupils and disciples of St Finian of Clonard". Crohane must be identified with the Cruachan of St Sinech he says, and the denomination of Magh Abhna has been reformed into Mowney a neighbouring parish in the barony of Slieveardagh. Her acts are not known to exist. Up to 1810 says O’Hanlon, her festival was remembered in Ballingarry on Oct 5th.

Crohane-Cruachan Muighe Abhnae. Church ruins are in Drangan parish. In the Feilire Aenguis, Crohane is given as the round hill of Moy-Owney. This parish is bounded on the west by the parish of Killenaule, on the east by the parish of Mowney, on the north and north east by the parishes of Lickfinn and Ballingarry. The parish is in Slieveardagh Barony, and an amount of its land would be at present in Ballingany parish, though the old church ruin is in Drangan. This is the place called Cruachan Muighe Abhnae i.e. Croghane Mowney in the Festiology of Aengus, at Oct 5th for the glossographer places it in the territory of Eoghanacth Chaisil. This is rendered absolutely certain by the existence of the well of the Patron Saint and of other names of places in its vicinity, which the ancient authorities place in Eoghanacth Chaisil as Doire na bFlann etc. The name signifies the round hill in the plain of Abhna, which may be interpreted the plain of the river. Magh Abhnai, the name of the plain is still retained in that of the parish of Moy-Owney which bounds Crohane on the east.