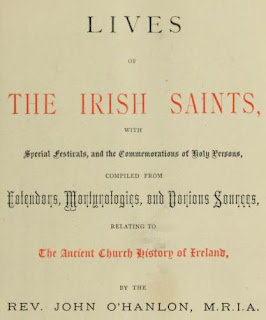 May 22 is the feastday of a County Wicklow saint, Baoithin of Ennisboyne. The account below has been edited from that of Canon O'Hanlon in Volume V of his Lives of the Irish Saints:

In the "Feilire" of St. Aengus, on the 22nd of May, the festival and name of Baethine Mac Findach are specially commemorated. The following is Dr. Whitley Stokes' English translation:—"Ronan (the) Fair's soul went to starry heaven, with the man bright, prolific, Baethine mac Findach."— This holy man lived, it is said, in the seventh century. The name Baithin mic Finnach occurs, also, in the Martyrology of Tallagh, at the 22nd of May. On the same authority, and on that of Colgan, the Bollandists notice Baithinus, son of Finnachus. According to the Martyrology of Donegal, Baoithin, son to Finnach, of Inis Baithin, in the east of Leinster, had veneration given him, on this day. By race, he was a Leinsterman; but, his father Findach is stated to have been a robber, in a commentary on that copy of St. Aengus' "Feilire," which is to be found in the "Leabhar Breac". However, as the account given is quite improbable and legendary, we may dismiss it, and the other circumstances referring to our saint's birth, which are beneath notice. We are told, elsewhere, that he descended from the race of Laoighsech Ceannmor, son to Conall Cearnach. Trea, daughter of Ronan, son to Colman, son of Cairpre, and a daughter to the King of Leinster, was his mother; while, the Scholiast on the "Feilire," in the "Leabhar Breac," calls her Cred, daughter of Ronan, King of Leinster, and in Dal Messincorb, moreover, he afterwards lived. This latter narrative seems to intimate, that Boethine had been born in or near Inis Boethine, and there, too, he probably spent his religious days, in retirement from all worldly concerns. This place, now known as Ennisboyne, sometimes called Ennisboheen, or Dunganstown, seems to have derived its denomination from him. This is now a parish, situated in the barony of Arklow, and county of Wicklow...