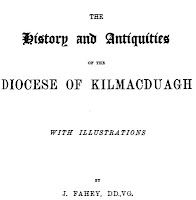 On May 3 we commemorate an Irish holy woman, Sairnait, anglicized as Sourney, who flourished in the County Galway area. Saint Sairnait was related to the family of Saint Colman mac Duagh, and so the account of her below comes from the diocesan history of Killmacduagh by Father Jerome Fahey:

The date of her birth is not given; but by comparing her genealogy with that of St Colman Mac Duagh, which shall be hereafter given, it will be seen that she stands the same number of degrees from their common ancestor, Eochaid Breac, as does Cobhtach, whose son Conal was great-grand-father of St. Colman Mac Duagh. Hence it may be fairly assumed that Cobhtach and St. Sourney were contemporaries. And as Cobhtach's father fought in the battle of Claonloch, A.D. 531, we can justly assume that St. Sourney belonged to the middle of the sixth century. She was born of the same princely tribe of which St. Colman was born later in the same century. She is identified by O'Donovan as the same female Saint who is now "corruptly called St. Sourney, to whom there are wells dedicated in the districts of Aidhne, and whose church still stands in ruins in the great island of Aran, in the Bay of Galway." And we are told by O'Flaherty's learned editor that "this church is held in the greatest veneration by the islanders."

But there is more to commemorate and honour the name of St. Sourney in Aidhne than the holy wells to which O'Donovan refers. St. Sourney's Church may still be seen in a fair state of preservation at Dromacoo, in the present parish of Ballindereen, at a distance of about three miles and a half from Kinvara.