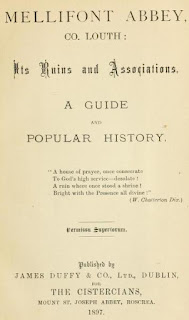 Last year we were introduced to a twelfth-century Cistercian saint, Christian O'Connarchy of Mellifont Abbey. Here is a brief reminder of him from a late nineteenth-century guide to the monastery this holy Cistercian founded:


In 1186, St. Christian O'Connarchy, or Connery, who had been the first Abbot of Mellifont and afterwards Bishop of Lismore and Legate of the Holy See, died, and was buried at O'Dorney, Co. Kerry, a monastery of his Order, which was founded in 1154, from Manister-Nenay. He had resigned all his dignities six years before, in order the better to prepare himself for a happy death. He was enrolled in the Calendar of the Saints of the Cistercian Order, and his festival was kept in England in pre-Reformation times, on the 18th March. In the eulogy of him in the Cistercian Menology it is said, "that he was remarkable for his sanctity and wonderful miracles, and that next to St. Malachy, he was regarded by the Irish nation as one of its principal patrons," even down to the time that that was written, A.D. 1630. An Irish gentleman who visited Italy in 1858, wrote from Venice to a friend, that he had seen amongst the fresco paintings which covered the wall of the beautiful church of Chiara- valla, the first Cistercian monastery founded in Italy, a painting of St. Malachy; also one entitled, "S. Christianus Archeps. in Hibernia Cisterciensis" — "St. Christian, a Cistercian monk, and Archbishop in Ireland." The error in ranking him as Archbishop probably arose from his having succeeded St. Malachy as Legate. It was in his Legatine capacity that he presided at several Synods, chiefly the memorable one convened by King Henry at Cashel, in 1172.

Mellifont Abbey, Co. Louth, its ruins and associations : a guide and popular history, 64.

Email ThisBlogThis!Share to TwitterShare to FacebookShare to Pinterest
Labels: Irish saints, Saints of the Cistercian Order, Saints of the Twelfth Century