Women Writers on the Irish Saints 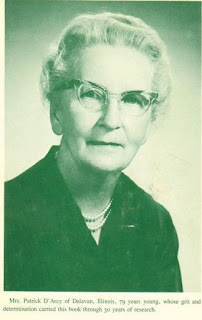 March 8 is International Women's Day and so today I wish to acknowledge some of the women writers on the Irish saints whose work I have encountered during research for this blog. I read a good deal of the Victorian popular religious press and am struck by how many opportunities publications such as the Irish Monthly, the Irish Rosary, the Messenger of the Sacred Heart etc. provided for women writers to have their voices heard.  One, whose work I am delighted to reprint here at the blog, is "Magdalen Rock", the pen name of County Tyrone schoolteacher Ellen Beck (1858-1924). Miss Beck lived in (and indeed rarely left) the village of The Rock, near Dungannon where she had been teaching in the local school since the age of sixteen. Her writings helped to transcend this rather insular existence as I have seen her work syndicated in American and Australian newspapers. I particularly enjoy the monthly feasts series she wrote for the Irish Rosary magazine and you can find her Saints of March article on the blog here.

The research for my new blog on the Irish Martyrs has introduced me to another lady writer of this era, "Laura Grey", which I suspect might also be a pseudonym. Unfortunately I have been unable to find out anything about this author but I have one of her papers at my other site here. A writer called Rosaleen O'Neil also wrote very competently about the Irish martyrs in 1905 and I was disappointed not to find any further papers by her or any other information on the woman herself. The two articles I have found can be accessed here.

Helena Walsh Concannon (1878-1952) was a rather better-known Irish woman writer whose output went well beyond the popular periodical press. A native of Maghera, County Derry she published over twenty books, some (sorry, feminists!) under her married name of Mrs Thomas Concannon. Her husband, Tomás Bán Ó Conceanainn, was a distinguished member of the Gaelic League who shared his wife's deep Catholic faith and her interests in nationalist politics and Irish history. Helena published a number of articles and books on the Irish saints including Saint Patrick: his Life and Mission in 1931, chapter XVI of which is entitled "Saint Patrick and the Women of Ireland".  Here she looks at how Saint Patrick evangelized the women of Ireland and the part played by women in his wider missionary endeavours. A century ago she also produced the Women of 'Ninety-Eight, a study of the female personalities associated with the 1798 Rebellion, long before women's history was fashionable.

Moving on in time brings me to a woman whose work I have on my bookshelves but sadly have not made much use of here at the blog. The Saints of Ireland by Mary Ryan D'Arcy was first published by the Irish American Cultural Institute in 1974. When I read on the back cover that "over the 30-year period of research, her file cards, books and papers threatened to evict the family",  I immediately recognized a woman after my own heart. Mrs D'Arcy's book contains eight chapters beginning with Early Irish Saints and ending with Modern Irish Missionaries. Along the way she deals with the Irish saints in Britain and Europe as well as the Irish martyrs of the Reformation period. In the introduction she tells us that her interest started with a prayer book from the old country containing a Litany of the Irish Saints and a desire to know more about these strange and largely unknown names. I have a particular respect for the fact that in a pre-Internet age, she 'delved into the record of Irish achievement, sorting through libraries in a dozen American cities and carrying on an immense correspondence with scholars and researchers throughout the U.S., in Ireland, England and on the Continent'. No wonder her book required three decades of research!

Although today is a 'feast' on the secular calendar it is my hope that these women writers of the past are now enjoying the company of the Irish saints in heaven whom they honoured here on earth.

Great to honour these women. I had never heard of any of them so this post is a signal mark of respect.

Thanks Finola, with the exception of Helena Concannon who was an Irish senator, I have found it very difficult to find out much about them as individuals.