September 7 is the commemoration of an island-dwelling saint of County Tipperary, Elair of Monahincha. This site was one of those visited in person by Canon O'Hanlon who explored Monahincha in May 1870 as part of his research for the Lives of the Irish Saints. I have reproduced the sketch made of the church ruins for the book but for some more recent illustrations of Monahincha there is an online collection of photographs here. Saint Elair's island retreat has links with two other saints of the Irish church, Cronan of Roscrea and Canice of Kilkenny, as Canon O'Hanlon explains:

St Elarius or Helair, Patron, Anchoret and Scribe of Monahincha, near Roscrea, County of Tipperary. (Eighth and Ninth Centuries.)

The published Martyrology of Tallaght records a festival in honour of Elair of Locha Cre, at the 7th of September.

This, however, does not accord with the ii. of Nones for this month— although thus set down—and as found in the Book of Leinster copy. The situation of Lough Crea is said first to have attracted the notice of the celebrated St. Cronan before he commenced the erection of his chief religious establishment at Roscrea. In the midst of this "Stagnum Cree" there was an "insula modica," or moderately-sized Island—now known as Monahincha— and here St. Cronan,it is said, first built a cell. Monahincha lies towards the left, on the high road leading from Borris-in-Ossory to Roscrea; but, the old church is hidden from view, owing to ornamental plantations which surround it in various directions. The greater religious establishment, however, seems to have been fixed at Roscrea —even in the time of St. Cronan— when it is probable Monahincha became a dependent on it, about the beginning of the seventh century. Already have we referred to some remains of antiquity in this town, formerly a place of considerable historic importance, especially in our ecclesiastical annals. After St. Cronan, the earliest saint recorded as having connexion with Inis Loch-Cre, is Coluim or Colum—resolvable into Columba. His period, however, has not been determined; but, it is probable, he preceded the present holy superior in point of time.

St. Elarius or Helair is called the son of Fintan, sprung from the race of Kein, and his brothers are said to have been Saints Aidan and Conrach. His mother is called Sinacha, third sister to the great St. Columbkille. This latter statement of Colgan must be rejected, if we take into account the date assigned for the death of Elarius. While Sinacha must have been born in the earlier part of the sixth century, the birth of this present Elarius took place, it is probable, at least two hundred years later. The feast of St. Hilair is found in the Martyrology of Marianus O'Gorman, at the 7th of September. In one place, Colgan notes a St. Hilarius Mocukein, a monk of Durrow, to whom he assigns a feast at the 7th of September. We cannot be assured, however, that he was identical with the present Elarius or Helair. On the contrary, he and his brothers, St. Aidan and St. Conry or Conrachus —stated to have been of Kevin's race —must have lived in the sixth century, if their mother was Sinecha, the sister of St. Columkille. The present saint was undoubtedly of a different family, and he was principally venerated at the place, now known as Monahincha, which the neighbouring people still call The Holy Island. It lies in the parish of Corbally, barony of Ikerrin, and County of Tipperary.

The lough is now for the most part dried up, but a bog occupies its former site. The old ruins of Monahincha are remarkably beautiful in their architectural peculiarities. Moory soil still extends around, notwithstanding that the waters of the lake have been completely drawn off; while the land is thoroughly drained and reclaimed into fine pasturage, and meadow. Rich grass grows over the soil. Its remarkable old church is covered with a luxuriant growth of ivy, around the whole exterior; but this has been removed from the interior, where all the wall surfaces may be seen. There are two most beautiful doors yet remaining, and almost entire; one of these enters the nave, and the other a small choir. They are semi-circularly headed and elegantly jointed along the jamb-stones, with zig-zag carving around the arches. The fluted columns are surmounted by curious old sculptured heads. Through the ivy on the exterior corners of the nave may be traced projecting columns of rounded and chiselled stones. The ruins stand in a tolerably well preserved state, in the centre of a grave-yard, overcrowded with human remains. The interior of the old church nave is occupied by a family tomb, and around it the floor has been levelled and gravelled; while the landed proprietor of the estate, on which the ruins are situated, seems to have taken special pains to preserve the existing remains. Beside the old Church of Monahincha are some ruins of an ancient monastery. 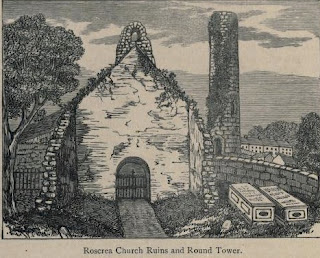 Not far from the ruins, some portion of the former extensive lake may be seen; but the inhabitants of the surrounding country have a tradition, that all the vast tract of bog, now extending for several miles towards a range of distant hills, was formerly covered with water, which circled the Holy Island.

The Church of Inis Lough Cre was dedicated to the St. Helair or Hilarius, whose festival is celebrated on this day, as we are informed. The terms by which he is distinguished in our records indicate, that while he led a life of strict observance and asceticism, he was also the writer of some works, which at present seem to be unknown. Perhaps, he belonged to that band of Coelicoli or Culdees, that lived on the smaller island —as distinguished from the greater —and of which no clear traces now remain; yet, it is recorded, that the passage from one island to the other, in the twelfth century, was made by means of a boat. Helair flourished after the middle of the eighth, and beginning of the ninth century. The death of this Elarius, Anchoret and Scribe, of Lough Crea, is entered in the Annals of the Four Masters, at 802; in those of Clonmacnoise, at 804; in those of Ulster, at 806; but, as we are told by Dr. O' Donovan, recte, it should be 807. His age at the time of his departure is not known. His name and festival are entered on this day, in the Martyrology of Donegal. In the table appended to this latter work, the name of our saint has been Latinised, Helarius.

Although Inis-Loch-Cre does not figure very prominently in our Irish Annals, the "Holy Island" appears to have obtained celebrity as a place of pilgrimage and to have had a resident superior in the twelfth century. After the death of St. Cronan, the religious institute he established at Roscrea appears to have flourished in piety and learning, for centuries succeeding his period. A copy of the Four Gospels, called Glass-Kennic, or the Chain of St. Canice, is said to have been there preserved to the time of Archbishop Ussher. Also at Roscrea was recovered the Book of Dimma, a scribe, the son of Aengus, the son of Carthin. Another work, known as the Annals of Roscrea, was probably composed in the monastery there established. A succession of Roscrea Abbots, sometimes styled Bishops, in our Annals, is recorded from A.D. 800 to 1174, when the parent institution seems to have gradually declined, and little account is had regarding it, when its ancient bishopric merged into that of Killaloe...