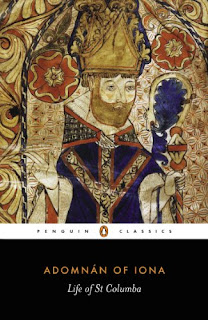 September 22 is the feast of a northern saint, Columb Crag of Enagh, near Derry. The Martyrology of Donegal on this date simply records 'COLUM, Priest, of Enach' while the Martyrology of Gorman describes him as 'Colomb, vehement, delightful (?)'. It is only in Adamnán's Life of Saint Columba, that we get a further glimpse into the character of Columb Crag. There he is depicted as a wise spiritual father who counsels Saint Fintan Munnu. Apart from this episode, nothing else seems to be known of Saint Columb. We will start with the account from O'Hanlon's Lives of the Irish Saints and conclude with the text from the Life of Saint Columba:

THE present servant of God seems to have been born early in the sixth century. Already has allusion been made to him in the Life of St. Columkille. The parentage of this St. Columb — surnamed Crag—is unknown ; but by Colgan he has been considered identical with a very wise and venerable man, who was the friend of St. Fintan Munnu, in the younger years of the latter, and probably also a spiritual director. However this may be, when Fintan Munnu desired to take a voyage from Derry to Iona, in order to visit St. Columba, he sought the advice of Columb Crag, who then resided at Eanach, and northwards from Derry. By our saint, Fintan was confirmed in that purpose, in the earlier part of June, A.D. 597.

Soon arrived monks from Derry, who brought news to Eanach from Iona, that the great archimandrite was dead. All who heard this shed tears in abundance. Nevertheless, when informed, that Columbkille had appointed St. Baithan as his successor, Columb Crag asked Fintan what he then desired to do. The latter replied, that he should still persist in his purpose of going to Iona to place himself under the rule of that pious and wise man Baithen as his Abbot.

The Church of Columb Crag was at Enach, in the northern part of Ireland, at this time, when he was regarded as a venerable old man. As to whether he had been a superior of monks we have no record left. About two miles to the north-east of Derry, this church of Enagh— between the two small Loughs of Eastern and Western Enagh —was situated in the present townland of Templetown... At present, there are no ruins or any traditions about St. Columb Crag, at Templetown. There are few townland denominations more numerous in Ireland than those known as Anna, or Annagh—the modern equivalent for Enach. The compounds of this form are still more numerous. It therefore would not be easy of accomplishment to identify this exact locality, but that Colgan gives us a further clue, by calling the present Saint Columba Cragius, superior of Enagh, or the church of Cluainenaich, near Derry, in Ulster. For this statement, too, he cites the authority of Adamnán. St. Columb Crag survived St. Columbkille, but whether or not he lived into the seventh century is unknown.

In the Martyrology of Marianus O'Gorman, at the 22nd of September, there is a festival for Colomb, vehement, delightful (?) as the Calendarist pleases to style him; while the scholion observes he was a priest from Enach. According to the Martyrology of Donegal, Colum, Priest of Enach, was venerated at the 22nd of September. In the year 1197, this church of Cluain-i Eanach was plundered by Rostel Pyton, a partisan of John De Courcy and the English of Ulidia, during a predatory excursion.

From Adamnán's Life of Saint Columba

St. Fintan, by God's help, kept himself chaste in body and soul from boyhood and devoted himself to the pursuit of godly wisdom, and in due course he came to enjoy renown among all the churches of Ireland. But while he was a young man he had in his heart this wish, to leave Ireland behind him and to join St.Columba in his life of pilgrimage. On fire with this desire, he approached a wise and venerable priest, a man of his own people and a personal friend, called Columb Crag, and asked his advice. Having told him what was in his mind, he got this answer:
'Your desire, I think, is devout and inspired by God. Who can stop you or say you should not sail away to St Columba?'
That very hour it happened that two of St Columba's monks arrived, who, when asked about their journey, replied:
'We rowed across from Britain not long ago, and today have come from Derry'.
'And is your holy father Columba in good health?' asked Columb Crag.
'Truly' they said, with tears and great sorrow, 'our patron is in the best of health since only a few days ago he departed to Christ'.
Hearing this, Fintan and Columb and everyone present looked down at the ground and wept bitterly. In a little while, Fintan continued, asking:
'Whom has he left to succeed him?'
'Baithéne', they said, his disciple'.
And all cried out, 'It is meet and right'.
Columb said to Fintan:
'What will you do now, Fintan?'
'If the Lord will permit me', he answered, 'I shall sail away to Baithéne, who is a holy and wise man. If he will receive me, he shall be my abbot'.
Then he kissed Columb and took his leave, preparing to sail without delay to Iona.