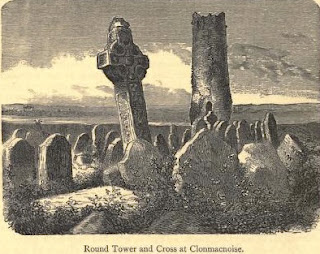 Ciarán of Clonmacnoise is considered as one of the 12 Apostles of Ireland, the great monastic founders of the sixth century. After studying with Finian of Clonard and Enda of Aran, two of the most important early Celtic monks, he founded several monasteries. The most famous of these institutions was at Clonmacnoise. Soon after this foundation, while still in his early thirties he died. The foundation at Clonmacnoise, although victimized in raids and battles for a thousand years, became second only to Iona as a centre for Christian learning in the Celtic world. On the banks of the river Shannon, Clonmacnoise became a very wealthy centre of monastic learning. The site was supposedly connected to a pre-Christian holy well and became a centre of pilgrimage because Ciarán promised that many souls would go to heaven from this site.

Information on Ciarán is scant, mostly reliant on hagiographies compiled by the monks at Clonmacnoise long after the founder had died in 548. His notoriety seems to depend on his connection to Kevin of Glendalough, Finian, Enda and other famous monastic leaders, along with his foundation at Clonmacnoise. Here, even more so than at other Celtic monasteries, a great deal of effort was put into learning and the production of books. The pre-Christian Celtic respect for learning allowed men such as Ciarán, from humble backgrounds, to rise to positions of great repute in the Celtic world. Ciarán had been born in 512. His father was a carpenter and this made Ciarán the only non-noble founder of one of the major sixth-century monasteries in Ireland.

The impact of education and the natural world occurs again and again in the stories about Ciarán. It is written that a stag wandered up to Ciarán to hold his books in his antlers and retired daily without getting the books wet. Many of the traditional topoi of Celtic hagiography hold true for Ciarán. Hagiographical accounts include the tale of a fox that carried Ciarán's books back and forth to his tutor, as well as of miracles relating to hospitality and the provision of food for guests. It was in the works of Ciarán and the other monastic founders of the sixth century that the centrality of education to Celtic spirituality appears. Christian teaching was considered essential to the conversion of pagans, and so Ciarán's 'monastic university' stood as a tribute to its founder for centuries after his death.